A "Plan B" for Defense Points Toward Better Vaccines 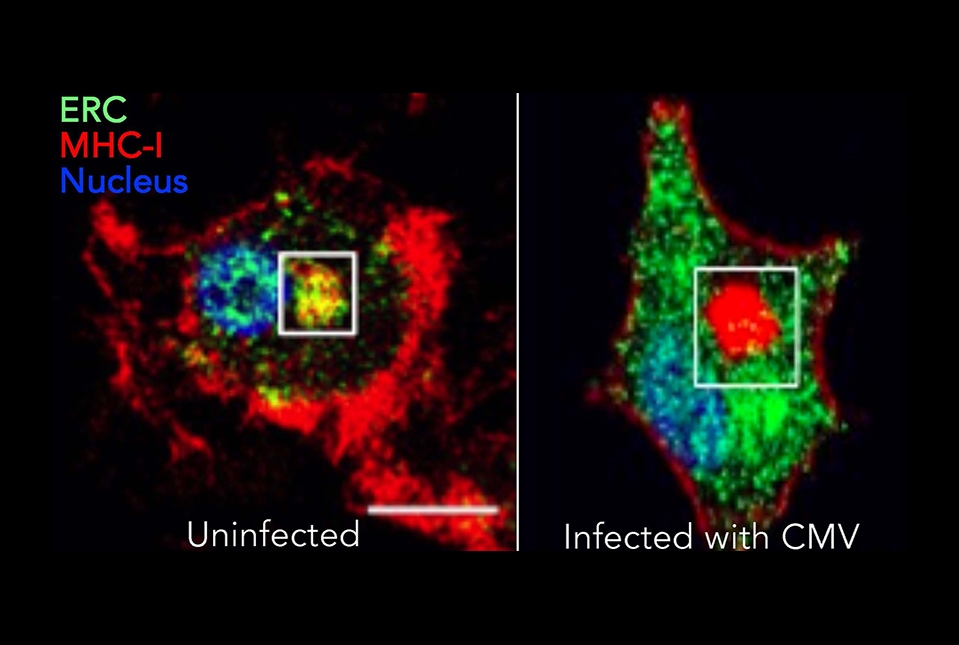 MHC class I molecules (red) in uninfected dendritic cells co-localize with a marker for the endosomal recycling compartment (ERC) (green) appearing as yellow (left). After infection with cytomegalovirus, which blocks the transporter associated with antigen processing (TAP) to evade cytotoxic CD8 T cells, MHC-I molecules no longer localize to the ERC (right).

Cells can use a backup mechanism to alert the immune system to viral infections when their normal responses are inhibited, according to new research by scientists at Weill Cornell Medicine. The results open a new avenue for exploring immunity and could help explain some of the variability in the effectiveness of different types of vaccines.

When an intracellular parasite such as a virus infects a cell, one of the cell's key responses is to present pieces of the invader's proteins, called antigens, on the cell surface. This antigen presentation process alerts passing immune cells to the danger, setting off a cascade of responses to contain and eliminate the pathogen. In a study published March 31 in Nature Immunology, the investigators identified an alternative pathway that can be activated when a component of the main system is blocked.

"Normally, during infection, the cell wants to increase the efficiency of the antigen presentation process; so mechanistically, how does this happen?" said senior author Dr. Julie Magarian Blander, Gladys and Roland Harriman Professor of Immunology in Medicine in the Division of Gastroenterology and Hepatology and a member of the Jill Roberts Institute for Research in Inflammatory Bowel Disease at Weill Cornell Medicine. A molecule called MHC-I is responsible for binding and presenting foreign antigens, and Dr. Magarian Blander and her colleagues had previously found large stores of MHC-I in a class of cells called dendritic cells.

"These stores are almost like your reserve army of MHC-I,” said Dr. Blander. “They get mobilized specifically to the sites within the cell where the antigen is coming in.” A molecule called the transporter for antigen processing (TAP) regulates and directs this response.

Stockpiling MHC-I and mobilizing it on demand provides a fast, powerful response to intracellular pathogens, but what happens when the pathogens evolve responses to that strategy? Indeed, many viruses can suppress the signals that regulate this pathway, allowing them to delay or evade the host's immune response. For years, researchers have presumed that under those circumstances, immunity relies on the infected cell dying, then getting consumed by other cells, called dendritic cells, that aren't infected. Those uninfected dendritic cells could then digest and present the viral antigens.

But while this certainly can occur, nobody had really tested the theory that infected dendritic cells could bypass viral interference and still play an important role in immunity. "In science there are waves of what's fashionable, and this problem of the transporter for antigen processing was fashionable in the nineties; we've moved on," said Dr. Blander. To revisit the subject, her team infected human dendritic cells with viruses that block TAP. They also simulated viral TAP suppression by artificially inhibiting TAP in dendritic cells. That caused the stores of MHC-I to vanish from their normal compartment.

"They don't just disappear, it turns out that they are in a different location within the dendritic cells," said Dr. Blander. Instead of reaching their normal deployment center, the MHC-I molecules were stuck in another intracellular compartment. However, they remained fully functional, and were able to bind and present antigens on the cell surface by a separate pathway.

Instead of relying on other dendritic cells to engulf the remains of infected dying cells and present the viral antigens, as in the previous model, the virus-compromised dendritic cells can mount their own responses. "The cell where the TAP-dependent pathway is blocked can overcome this blockade by mobilizing non-canonical, or alternative, cross-presentation" of the antigens, Dr. Blander said.

Besides allowing cells to smuggle MHC-I molecules and present antigens around viral blockades to alert the immune response, this newly discovered non-canonical pathway could have its own advantages. One possibility is that the canonical and non-canonical pathways might select and present slightly different antigens, producing a broader immune response that would be harder for a virus to escape.

"We want to see if we can exploit that strategy in vaccination," said Dr. Blander.