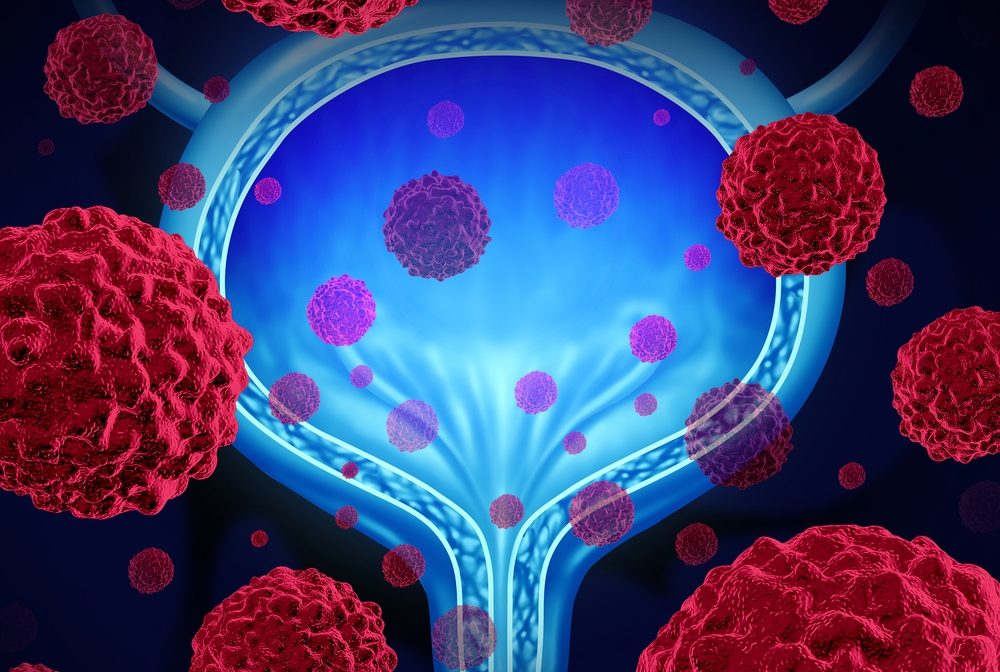 Representation of metastatic bladder cancer as an anatomical organ with malignant cells spreading in the human body. Credit: Shutterstock

A significant percentage of patients with urothelial cancers have inherited gene variants that drive the progression of these cancers, according to a study from researchers at Weill Cornell Medicine and NewYork-Presbyterian.

Urothelial cancers and their genetic roots traditionally have been understudied, and treatments for these cancers are limited. The discoveries in the new study, published Dec. 3 in Nature Communications, could enable more targeted and effective treatments for patients who have these cancers.

“We were able to detect gene variants in these patients that were there from birth and also appeared to be involved in the progression from initial tumor development to late-stage metastatic spread,” said senior author Dr. Bishoy Faltas, an assistant professor of medicine and of cell and developmental biology at Weill Cornell Medicine and an oncologist in the Genitourinary Oncology Program at NewYork-Presbyterian/Weill Cornell Medical Center. “These findings have potential implications for the development of precision medicine treatments in thousands of urothelial cancer patients.”

Urothelial cancers arise from the urothelial cells that line the bladder and other parts of the genitourinary tract. The American Cancer Society estimates that this year there will be more than 80,000 new cases of, and nearly 18,000 deaths from, bladder cancer, the type that represents the vast majority of urothelial cancers.

Although men are about three times more likely than women to get bladder cancers, and there are also specific environmental risk factors including smoking and exposure to industrial chemicals, studies of twins have suggested that the chance of getting bladder or other urothelial cancers is inherited. Yet relatively little has been known about the genes underlying that heritable risk, in part because prior studies in this field have tended to examine only limited sets of suspected risk genes.

In the new study, Dr. Faltas and his colleagues cast a wider net with a technique called whole-exome sequencing, which sequences the DNA in the protein-encoding segments of all 21,000 or so protein-encoding genes across the human genome. To make their method more sensitive, the researchers used an algorithm to zero in on DNA variations that would be expected to deactivate known “tumor suppressor” genes. Tumor suppressor genes encode proteins that, in one way or another, help keep cells from turning cancerous. They are commonly found to be partly or fully deactivated in tumor cells.

The scientists analyzed the germline DNA in the normal, non-tumor cells of 80 urothelial cancer patients. This is DNA collected from blood or cheek swabs that is not cancerous and reflects the genome inherited at birth. They found that 45 of the patients—about 56 percent—harbored DNA variants that would likely deactivate one copy of a known tumor suppressor gene. Most genes are found in two copies in every cell, and the inherited absence of one copy of a tumor suppressor, which could weaken a patient’s natural anti-cancer defenses, could explain some of the patient’s inherited risk. Half of the 80 patients reported having at least one first-degree relative, such as a parent or sibling, with a history of cancer.

The researchers also examined DNA in the patients’ primary urothelial tumors and in the tumors that had metastasized from primary tumors to other sites in the body. They observed that when a patient had effectively lost one copy of a tumor suppressor gene in his or her normal cells, the patient’s primary and metastatic tumors often showed progressive loss of the second copy.

“It strongly suggests that these germline variants are not only creating an inherited risk for developing these cancers but are also playing a potential role in cancer progression and spread,” said Dr. Faltas, who is also director of bladder cancer research at the Caryl and Israel Englander Institute for Precision Medicine and a member of the Sandra and Edward Meyer Cancer Center at Weill Cornell Medicine.

The researchers validated their findings by applying the analysis to DNA data from a prior study of 398 urothelial cancer patients. Again, they found that about half the patients harbored likely-deactivating variants of known tumor suppressor genes. In collaboration with Dr. Wendy K. Chung’s team at Columbia University Vagelos College of Physicians and Surgeons, the authors found that these urothelial cancer patients are more likely to harbor this set of germline variants compared to non-cancer subjects.

The researchers examined the biological pathways represented by the risk variants they uncovered, and found that some of the variants involve disruptions to DNA repair mechanisms. Researchers know that DNA repair disruptions, although they may promote cancerous growth, can also make tumors highly susceptible to certain types of treatment. Thus, in principle, the researchers say, whole-exome sequencing of urothelial patients’ normal cells as well as tumor cells might allow many patients to be treated much more effectively.

”This study demonstrates the need to use methods that more broadly examine the cancer genome, such as whole-exome and whole-genome sequencing, to discover important features in tumor development and progression,” said Dr. Sboner, who is also a member of the Meyer Cancer Center at Weill Cornell Medicine and a pathologist at NewYork-Presbyterian/Weill Cornell Medical Center.

In a parallel effort, Dr. Faltas and his colleagues recently received a grant from the New York Genome Center’s P1000 Consortium to conduct a large ethnically diverse study of the genetics underlying urothelial cancers.

”Our integrative analysis of inherited and newly acquired mutations in the urothelial cancer genome suggests we may be able to extrapolate these findings to other tumor types and different ethnicities,” said Dr. Mosquera, who is also a member of the Meyer Cancer Center at Weill Cornell Medicine and a pathologist at NewYork-Presbyterian/Weill Cornell Medical Center.

”These studies will change our understanding of the role of the germline genome in bladder cancer patients so we can develop more personalized and effective treatment strategies,” Dr. Faltas said.

Dr. Bishoy Faltas is an advisory board member for Immunomedics and consultant for Merck & Co. Dr. Juan Miguel Mosquera has a research collaboration agreement with Personal Genome Diagnostics, Inc.