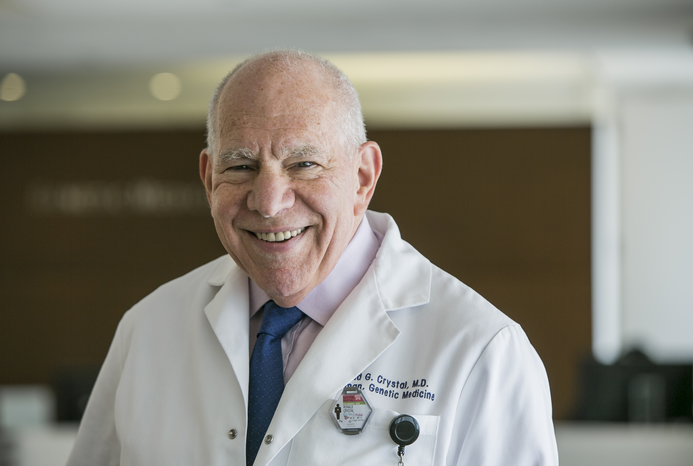 In the study, published Dec. 2 in Science Translational Medicine, Dr. Ronald Crystal, chairman of the Department of Genetic Medicine at Weill Cornell Medicine, and colleagues used a genetically modified virus to deliver a functional copy of the CLN2 gene, which is essential for brain health, into the brain cells of children with Batten disease. Those with the disease lack a normal functioning copy of the gene and the therapy substantially slowed the loss of motor skills and language typically seen in children with the condition.

“The gene therapy slows down the progression of the disease significantly; that's very positive, but it's not yet a cure,” said Dr. Crystal, who is also the Bruce Webster Professor of Internal Medicine at Weill Cornell Medicine. “The next step is to turn it into a cure.”

Late infantile Batten disease occurs when children inherit two defective copies of the CLN2 gene. The children are unable to produce an enzyme called tripeptidyl peptidase 1 (TPP1), which helps brain cells clear debris. Without the enzyme, debris accumulates, eventually killing the cells. As a result, around the ages of 2 to 4, children begin developing symptoms like seizures and difficulty walking or talking. The symptoms worsen over time and children with late infantile Batten disease die between the ages of 8 and 12.

The only U.S. Food and Drug Administration approved therapy for Batten disease is an infusion of TPP1 into the cerebral spinal fluid every two weeks through a catheter inserted under the scalp. The enzyme-based treatment slows but doesn’t cure the disease.

Dr. Crystal and a multi-disciplinary team tested whether gene therapy might be an alternative that would only have to be administered once.

“Gene therapy is essentially a drug delivery system,” said Dr. Crystal, who is also a pulmonologist at NewYork-Presbyterian/Weill Cornell Medical Center. “Instead of delivering the enzyme, we're delivering the gene for the enzyme and we're letting the cells in the brain make the normal enzyme.”

In a phase 1 clinical trial at Weill Cornell Medicine and NewYork-Presbyterian/Weill Cornell, the investigators administered the gene therapy to seven children with mild-to-moderate Batten disease through several small catheters into the brain to test how well it worked. A second group of five children with more severe disease also received the therapy to help determine its safety. Children who received the therapy produced the TPP1 enzyme and their motor and language declines slowed by about 40 percent compared with two groups of children with untreated Batten disease. They experienced no serious side effects.

The therapy was not as effective as the enzyme infusions, which slow disease progression by about 80 percent. But Dr. Crystal believes the next generation of the gene therapy will be able to completely stop disease progression. He explained that the study used older techniques that may have limited how much of the therapy reached the brain cells.

Weill Cornell Medicine has licensed the gene therapy to New York City based gene therapy biotechnology company LEXEO Therapeutics for further development, with the goal of moving the program to a pivotal study.

Dr. Crystal is a founder, chief scientific advisor, and equity stakeholder for LEXEO, and a consultant for BioMarin. BioMarin and LEXEO were not involved in the subject clinical study.

“We’ve developed more effective ways to deliver the gene therapy that we are studying now in the laboratory,” Dr. Crystal said. “We are hoping to start another clinical trial in a year. We think that if we can get more of the virus into the brain safely, we can cure the disease."