Research Reveals Why Some Tumors Have Different Makeup of Cells 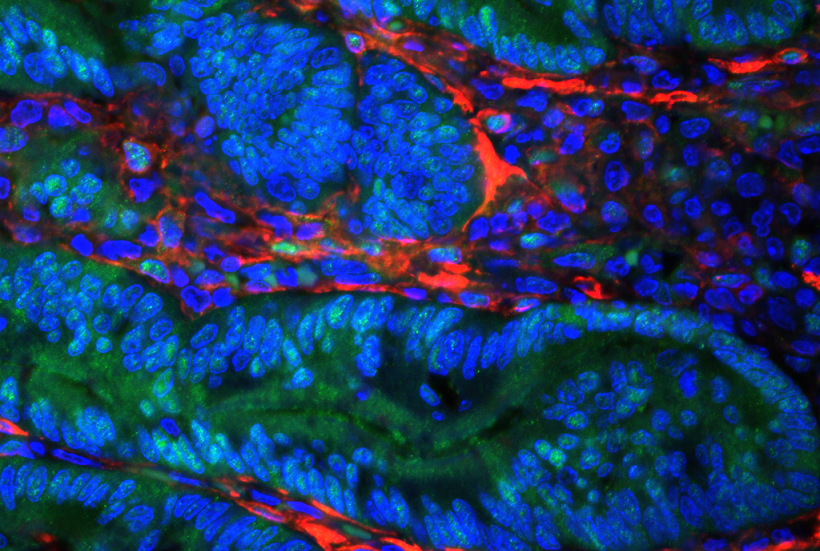 Image of a colon tumor in mice. Cancer-associated fibroblasts (red) help the tumor grow more aggressively
and help block the immune system response against it.

Molecular changes in cells called fibroblasts, which help provide support for tissues throughout the body, may explain why one type of colon cancer doesn’t respond to therapy, according to a team of researchers from Weill Cornell Medicine. Targeting these cells may be a way to make treatment more effective.

In a study published Nov. 17 in Developmental Cell the investigators examined cells called fibroblasts in CMS4, the most aggressive and difficult-to-treat form of colorectal cancer, to determine how these cancer-associated cells acquire traits that allow them to support malignancy in neighboring cells. CMS4 affects about a third of all colorectal cancer patients.

“There are two important components to this study,” said co-senior author Dr. Jorge Moscat-Guillen, Homer T. Hirst III Professor of Oncology in Pathology and Vice-Chair for Experimental Pathology. “First, we have shown in a mechanistic way how these cancer-associated fibroblasts acquire the characteristics that they have. Second, we confirmed that what we discovered in our lab models also applies to patients, which begins to suggest how these findings could be useful in the clinic.”

Tumors are made up not only of cancer cells, but many other kinds of cells as well. These other cell types can influence how a tumor behaves and can have a profound effect on whether it responds to therapy, including treatment with immunotherapy.

Fibroblasts are present throughout the body. In the colon, they are part of the contractile system that is key to digestion. Researchers have known that the presence of fibroblasts inside a tumor can impact its behavior, especially influencing whether tumors respond to immune checkpoint blockade drugs. These are drugs that take the brakes off the immune system and allow it to attack cancer. “Until now, a pending question in the field has been what causes these tumors full of fibroblasts to develop,” said co-senior author Dr. Maria Diaz-Meco, a professor in the Department of Pathology and Laboratory Medicine.

Previous research from Dr. Moscat and Dr. Diaz-Meco reported the creation of a mouse model that mimics CMS4 colorectal cancer. As in patients with this type of colorectal cancer, a high concentration of cancer-associated fibroblasts is found within the tumors of these mice.

In the current study, the researchers used these mouse models, as well as cells grown in the test tube and organoids (tiny clusters of cells grown in a dish) to further study the relationship between cancer cells and cancer-associated fibroblasts. “We found that the cancer cells send out a signal that changes the fibroblasts,” Dr. Moscat said. “The fibroblasts that emerge make the tumor more aggressive and more stealthy to the immune system.”

The researchers used animal models to test the behavior of the cells they had altered in the lab. They also performed a type of analysis called single-cell RNA sequencing to further confirm that their observations in the lab matched what is observed in patients samples.

Drs. Moscat and Diaz-Meco say now that they understand the communication between cancer cells and fibroblasts, they believe that drugs could be developed to block it. “The fibroblasts are acting in a way that protects the tumor from the immune system,” Dr. Moscat said. “We want to find ways to target the fibroblasts that deprives the tumors of this protective environment.” These drugs would likely be used in combination with immunotherapy, to first lower the defenses of the fibroblasts, allowing the immune cells that are activated by checkpoint blockade drugs to better do their jobs.

“Now that we understand the roles of SOX2 and PKCz,” Dr. Diaz-Meco said, “we have two good biomarkers that we could use to assign patients to trials with these drugs.”

The researchers noted that the findings from this study could also apply to other cancers, especially pancreatic cancer. Pancreatic tumors also contain large numbers of fibroblasts that appear to make these tumors less receptive to treatment.