Finding May Lead to New Treatments for Neurofibromatosis 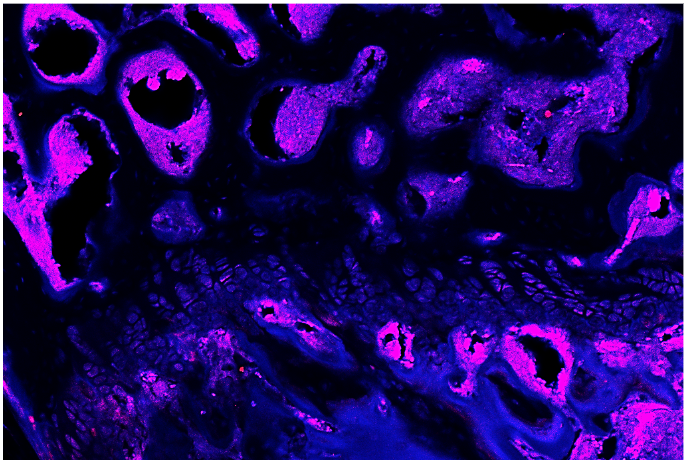 Activation of the ERK pathway is visualized in red in the femur of mice lacking MEKK2. Cell nuclei are stained in blue, and where the stains overlap, the image appears to be pink. All images courtesy of Dr. Seoyeon Bok.

Common symptoms of the genetic disorder neurofibromatosis type 1 (NF1), including skeletal fragility and the loss of bone mass, may be treatable with an existing anti-cancer drug, according to a study from researchers at Weill Cornell Medicine. The findings reveal the potential for an expanding array of therapeutic options for patients who have this difficult-to-treat condition.

NF1 currently has almost no drug treatment options, and although doctors are beginning to use drugs called MEK inhibitors to treat the disease, the findings suggest that ponatinib or future novel drugs targeting the newly uncovered pathway may be able to treat NF1 more effectively and safely.

“Ponatinib may have some clinical value here, and we also can start screening for potential new drugs that work even better than ponatinib against this newly discovered pathway,” said senior author Dr. Matthew Greenblatt, an associate professor of pathology and laboratory medicine at Weill Cornell Medicine and a pathologist at NewYork-Presbyterian/Weill Cornell Medical Center. 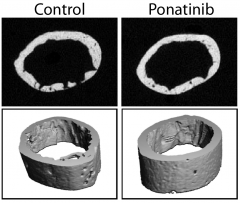 NF1 afflicts about 1 in every 3,500 people, or roughly 100,000 people in the United States. Signs and symptoms, apart from skeletal manifestations, include tumors—mostly benign—on peripheral nerves, called neurofibromas, and learning difficulties in childhood.

The gene mutations underlying NF1 lead to a deficiency of a protein called neurofibromin, which normally works to regulate signaling through a cell growth pathway called the ERK pathway. The deficiency of neurofibromin leads to overactive ERK signaling, which in turn drives an excess proliferation of some cell types, along with other abnormalities. Excess ERK signaling is also involved in many cancers, so the pharmaceutical industry has been developing ERK-pathway-inhibiting cancer drugs—one of which, selumetinib, was recently approved by the U.S. Food and Drug Administration for treating tumors in children with NF1.

The ERK pathway is broadly important for cell growth and survival, and so ERK inhibitors have many unwanted side effects. Dr. Greenblatt and colleagues therefore sought a narrower therapeutic approach—one that would target ERK overactivity in affected tissues but would have fewer effects outside those tissues.

Dr. Greenblatt’s work in recent years has focused on the molecular workings of bone in health and disease, and in the new study he and his team found that a signaling enzyme called MEKK2 works to activate a version of the ERK pathway found in bone-making cells known as osteoblasts, and appears to be a more narrowly defined target for NF1 treatments. In mice with NF1, knocking out the gene for MEKK2 strongly reduced ERK signaling in osteoblasts and dramatically reduced the skeletal abnormalities that are usually seen in the rodents. The researchers showed that ponatinib, which inhibits the activity of MEKK2, had similar benefits—benefits that persisted for several weeks after treatment was stopped.

The finding appears to open up new possibilities for treating NF1, Dr. Greenblatt said, although he notes that ponatinib, while already approved by the FDA for treating two forms of leukemia, inhibits multiple enzymes and has many side effects.

“Our findings in this study are encouraging as a proof of concept, but it might be better to have a drug that is more narrowly targeted to MEKK2,” Dr. Greenblatt said.

He and his team hope to find more narrowly MEKK2-targeted compounds, and also plan to study whether the targeting of this pathway also works against NF1 nerve tumors.