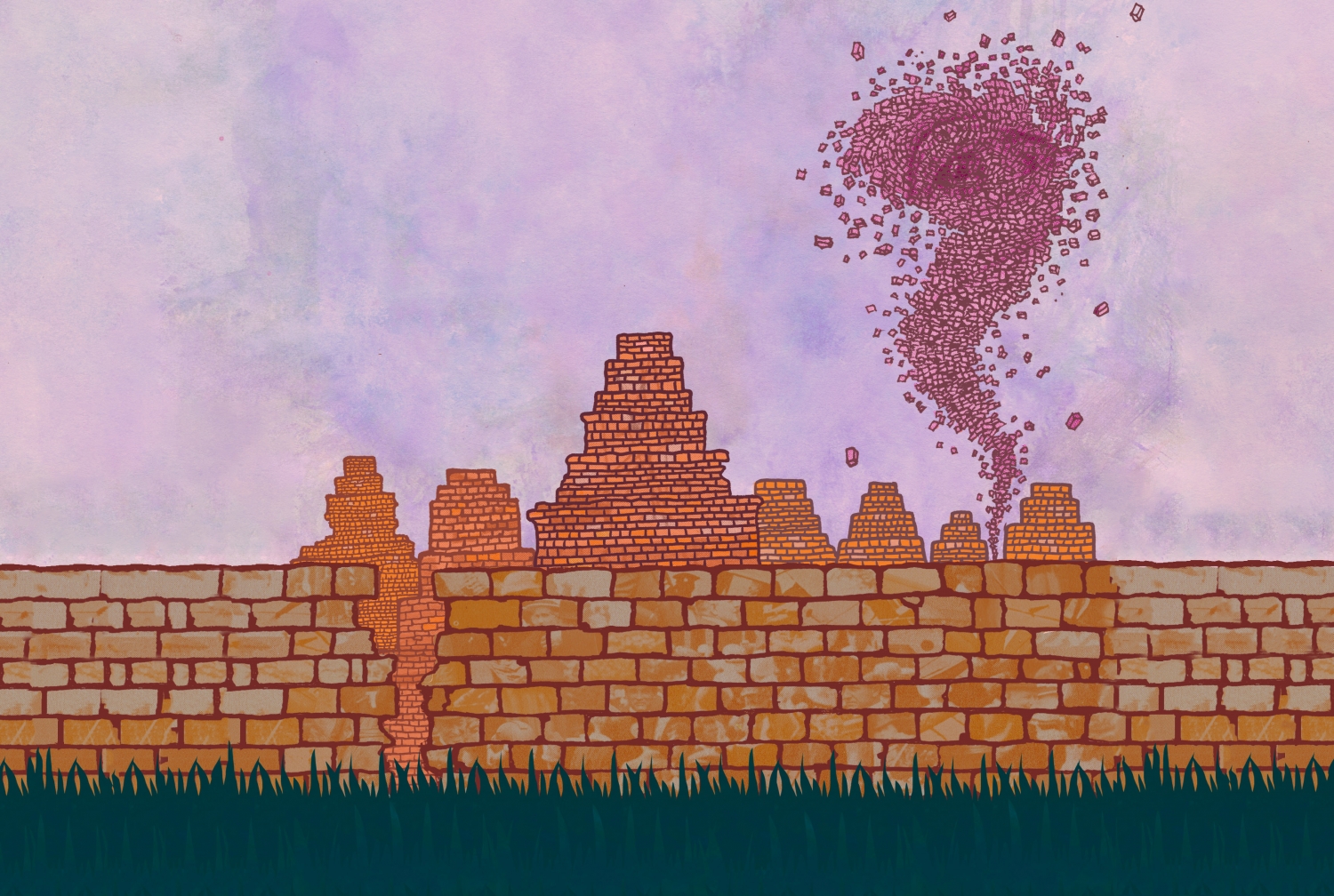 The image illustrates three distinct structures uncovered across thousands of cancer genomes: a rift (rigma) in the wall, recurrent towers (pyrgo), and a dramatic tornado (typhoon) shape a complex and turbulent landscape. Illustration by Dijon Strauss

Cancer cells rearrange, copy, and delete their DNA in complex but distinct patterns, according to new research from a multi-institution team led by investigators at Weill Cornell Medicine and the New York Genome Center. The investigators developed sophisticated new algorithms to analyze nearly 3,000 genome sequences from human tumors.

The results, published October 1 in the journal Cell, reveal three new classes of complex DNA rearrangements, each characteristic of different types of tumors. Oncologists may soon be able to use these patterns to improve cancer diagnosis and treatment.

Scientists have long known that cancer cells accumulate changes in their DNA, but alterations to genome structure have been particularly difficult to study. "In cancer, many of the mechanisms that keep the genome intact are compromised," said senior author Dr. Marcin Imielinski, assistant professor of pathology and laboratory medicine in the Department of Pathology and Laboratory Medicine and of computational genomics in the HRH Prince Alwaleed Bin Talal Bin Abdulaziz Al-Saud Institute for Computational Biomedicine at Weill Cornell Medicine and a core member of the New York Genome Center. As the DNA maintenance machinery breaks down, cancer cells accumulate large and small-scale alterations in DNA structure that help the cells grow, multiply and escape the body's natural anti-tumor defenses. "In a large fraction of tumors, across many cancer types, these structural changes affect the majority of the genome," said Dr. Imielinski.

Tumor cells may acquire extra copies of genes, or even entire chromosomes, and may also rearrange DNA within their genomes. Researchers usually study these two types of alterations separately; however, that belies their full complexity. Dr. Imielinski compared the changes to a heavily edited book: "If I took a piece of chapter three and I duplicated it five times, and then I stuck it into the middle of chapter two, and then shredded that whole thing and distributed the pieces around the last ten chapters of the book, these are the kinds of transformations" that occur in tumor cell genomes.

To untangle such messes, Dr. Imielinski’s laboratory developed a novel computational algorithm that infers variations in DNA sequence copy number and rearrangement simultaneously. They then applied that algorithm to 2,778 whole genome sequences from different types of tumors, including over 500 samples sequenced in collaboration with the New York Genome Center, Fred Hutchinson Cancer Research Center, NYU School of Medicine and Memorial Sloan Kettering Cancer Center. Additional collaborators include teams at NYU’s Courant Institute of Mathematical Science; the Broad Institute of Harvard and MIT; University of California, San Francisco; The Rockefeller University and Columbia University.

The algorithm revealed three new classes of complex genome rearrangements. Following an established practice in the field, the scientists gave the new classes descriptive Greek names. Rigma, or fault-like rearrangements, consist of multiple DNA deletions and tend to be associated with fragile regions of the genome. Cells from esophageal cancers and a pre-cancerous condition called Barrett's esophagus are prone to accumulate rigma. Pyrgo, or tower-like alterations, involve multiple insertions of DNA segments, often into regulatory regions of the genomes of ovarian, breast or prostate cancer cells. Finally, tyfonas are dramatic alterations that resemble typhoons, scattering numerous copies of a DNA sequence across a large genomic region. Associated with certain liposarcomas and melanomas, tyfonas could be a source of “fusion” proteins that may make these tumors recognizable by the immune system.

While the underlying algorithms may be difficult for non-specialists to understand, the investigators have also developed visualization tools to interactively browse thousands of genome graphs.  This web interface enables dynamic exploration of the different classes of rearrangements the team has found so far. Dr. Imielinski, who is also a member of the Caryl and Israel Englander Institute for Precision Medicine and the Sandra and Edward Meyer Cancer Center at Weill Cornell Medicine and a clinical pathologist at NewYork-Presbyterian/Weill Cornell Medical Center, explains that the graphs provide a more intuitive view of the patterns of changes in the tumor genomes, allowing geneticists and oncologists to assess their significance and evaluate their functional impact. The team's data, algorithms and visualization tools are all available through an online portal.

Dr. Imielinski and his colleagues hope to apply their algorithms to more tumor genomes and identify additional classes of rearrangements. They are also adapting their approach to analyze individual clinical cases. As DNA sequencing costs decline and the researchers validate their findings, oncologists might soon be able to use whole genome sequences of patients' tumors to customize their treatments. "I think in a few years, it'll be both feasible and practical to be doing this routinely," said Dr. Imielinski.