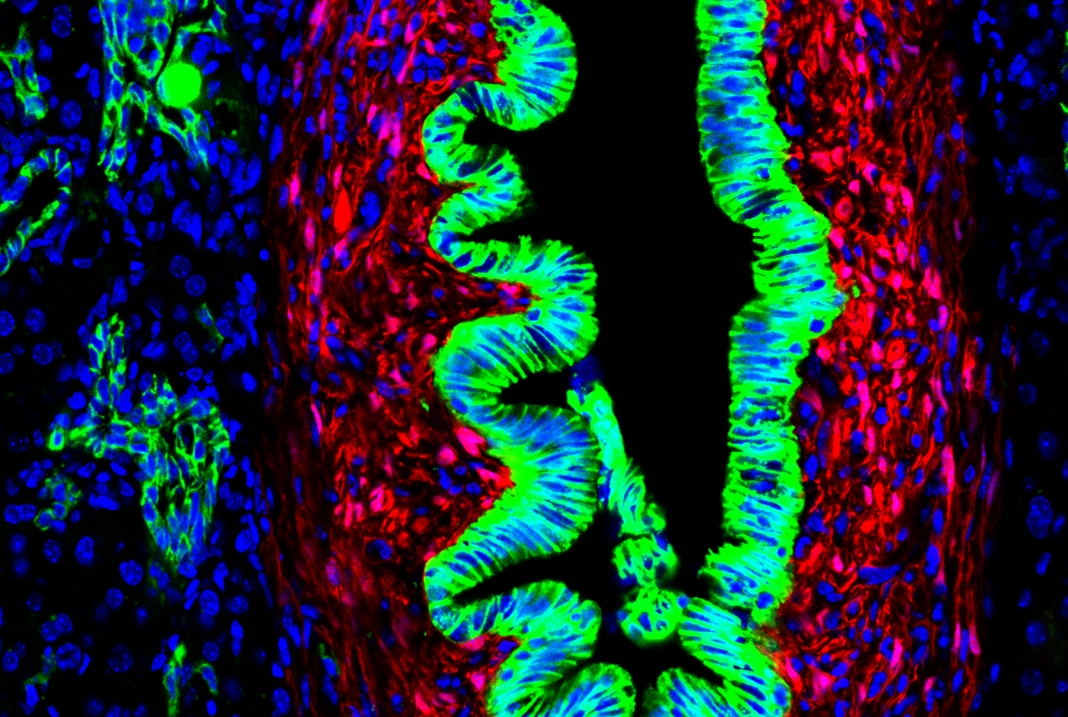 An understudied type of liver cell may drive scarring in liver disease and could be a promising target for new treatments, suggests a new study by Weill Cornell Medicine investigators.

Fibrosis or scarring of the liver is a key step in liver diseases like cirrhosis and liver cancer. Chronic damage to the liver manifests in various forms of fibrosis depending on which part of the liver is affected. To develop effective treatments, scientists need to understand which cell types are driving the disease in each specialized liver region and the processes within these cells that contribute to the development of fibrosis. The study, published April 11 in Gastroenterology, finds that a cell type called the peribiliary mesenchymal cell (PMC) plays a key role in fibrosis of the bile ducts of the liver.

The biliary tract is an important component of the liver that forms a merging network of bile ducts to take liver secretions to the intestinal tract. Currently, there are no effective treatments for chronic biliary tract disorders, which can eventually lead to biliary fibrosis. Many previous studies had suggested that liver fibrosis is driven by stellate cells, a cell type found in the main functional part of the liver known as the parenchyma. However, there were some indications that they might not be the sole driver of fibrosis in the bile ducts. At the same time, scientists knew that PMCs surround the bile ducts, but their role in biliary fibrosis had not been explored. Lead author Dr. Vikas Gupta, an instructor at Weill Cornell Medicine, used knowledge of the unique characteristics of PMCs track how they respond to biliary damage and contribute to fibrosis.

“From that insight, Dr. Gupta utilized tools that would allow us to trace the fates of PMCs inside mice after different types of liver injury,” said senior author Dr. Robert Schwartz, an assistant professor in medicine in the Division of Gastroenterology and Hepatology at Weill Cornell Medicine and a hepatologist at NewYork-Presbyterian/Weill Cornell Medical Center.

Because of their spatial orientation, PMCs express a gene called Gli1 in response to hedgehog ligand secreted from bile duct cells, explained Dr. Gupta. In contrast, this gene was not expressed in hepatic stellate cells, giving the investigators a way to distinguish the two cell types.

Using mice genetically engineered to express a fluorescent tag in Gli1 positive PMCs allowed the investigators to watch what happened to these cells taken from mice that had two different types of liver injuries. They found that PMCs multiplied and deposited scar tissue along the biliary tract in the liver after different types of biliary injury, but not when injury was in the parenchymal areas. Interestingly, stellate cells formed another layer around these cells as biliary fibrosis continued to proceed.

The investigators also used a technique called transcriptomics to see which genes are expressed in these two liver cell types. This showed that the PMC cells are indeed a distinct cell type expressing a unique set of genes, including many genes in the hedgehog signaling pathway.

“Stellate cells have been thought for a long time to be the primary mediators of fibrosis in multiple contexts,” Dr. Gupta said. “But we were able to uncover that these PMCs, driven by hedgehog, form a compartmentalized fibrotic response to biliary diseases that cooperate with stellate cells.”

Next, the investigators looked at liver tissue samples taken from patients with three different types of liver disease, primary sclerosing cholangitis (PSC), alcoholic liver disease (ALD), and nonalcoholic steatohepatitis (NASH), as well as people with healthy livers. They found that there was more expression of the PMC-associated genes in the livers with fibrosis, compared with the healthy livers.

The next steps for the team will be to learn more about PMCs to understand if this cell type can be targeted for therapeutic approaches. They hope these studies will eventually lead to new treatments for liver disease that can treat fibrosis in chronic biliary tract diseases.