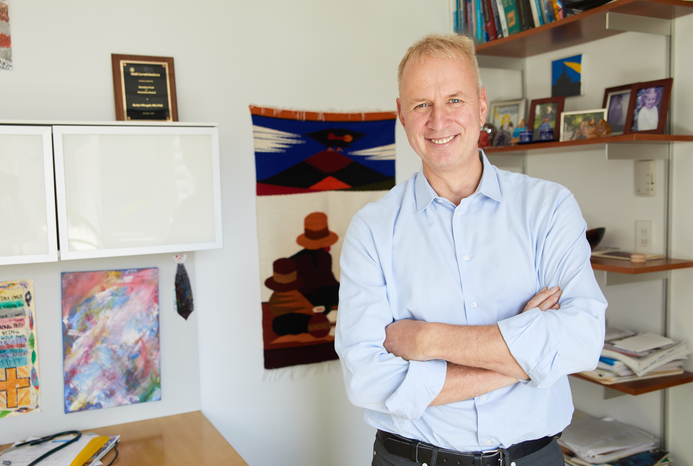 An underlying problem with the production of important cellular building blocks called sphingolipids may explain why children with certain genetic risk factors develop asthma, according to a study by Weill Cornell Medicine, NewYork-Presbyterian and Columbia University Irving Medical Center investigators.

In a previous investigation, teams led by Dr. Stefan Worgall, chief of the Division of Pediatric Pulmonology, Allergy and Immunology at Weill Cornell Medicine and NewYork-Presbyterian/Weill Cornell Medical Center, and Dr. Tilla Worgall, associate professor of pathology and cell biology at Columbia University Vagelos College of Physicians and Surgeons, showed that reduced production of sphingolipids causes hypersensitive airways in mice. Now, in a study published Jan. 13 in the Journal of Clinical Investigation, they confirm that asthmatic children who have genetic variations associated with an increased risk for the disease also produce less sphingolipids. The findings may help scientists develop new therapies for asthma that target this underlying problem rather than later symptoms of the disease like inflamed airways.

“If this metabolic pathway is slightly abnormal in asthma, it may explain an underlying reason people develop the disorder,” said Dr. Worgall, a co-senior author of the study who is also a distinguished professor of pediatric pulmonology and a professor of pediatrics and of genetic medicine at Weill Cornell Medicine. “This pathway would be a potential target for new therapies that would be completely different from those currently available.”

Scientists have known for a while that variations in the ORMDL3 gene make people more vulnerable to developing asthma, but they didn’t know exactly how. The team’s previous work implicated alterations in ORMDL3 and reduced production of sphingolipids, fats that are used to build the walls of cells and to send messages between cells. In mice, reduced sphingolipids were associated with airway hyperreactivity, a key feature in asthma.

To confirm this also occurs in humans, they looked at blood samples from 120 children—roughly half with asthma and half without—to see if children with asthma who have genetic variations associated with ORMDL3 also produce fewer sphingolipids. They confirmed that the children did have lower levels of sphingolipids in their blood compared with children without asthma.

“This is the first study to show a link between these genetic risk factors and a potential mechanism involving sphingolipids in children,” said lead author Dr. Jennie Ono, assistant professor of clinical pediatrics at Weill Cornell Medicine, and director of the Weill Cornell Pediatric Asthma Program.

The next step for the team will be teasing out, step by step, how reduced sphingolipid production contributes to asthma vulnerability. This will include determining whether the different cell types lining the airways are affected. They also want to figure out how reduced sphingolipid production may make people with asthma more susceptible to asthma triggers like infections, pollution and allergies.

“We know that many factors contribute to the development of asthma and asthma symptoms,” said Dr. Ono, who is also a pediatrician at NewYork-Presbyterian Komansky Children’s Hospital. “Reduced sphingolipid production may create an environment in the lungs that makes them more susceptible to environmental exposures that trigger asthma symptoms.”

Dr. Worgall, who is also a pediatrician at NewYork-Presbyterian Komansky Children’s Hospital, called the differences in sphingolipid production associated with these genetic risk factors “an Achilles heel” that makes people more vulnerable to developing asthma. Together with collaborators at Columbia, he and his team are studying whether they can create treatments that target this vulnerability and help reduce asthma symptoms before they start. Currently, therapies like inhalers and corticosteroids target inflammation, which is a later step in the process.

Developing therapies that target this underlying vulnerability may allow us treat the root of the problem,” he said.