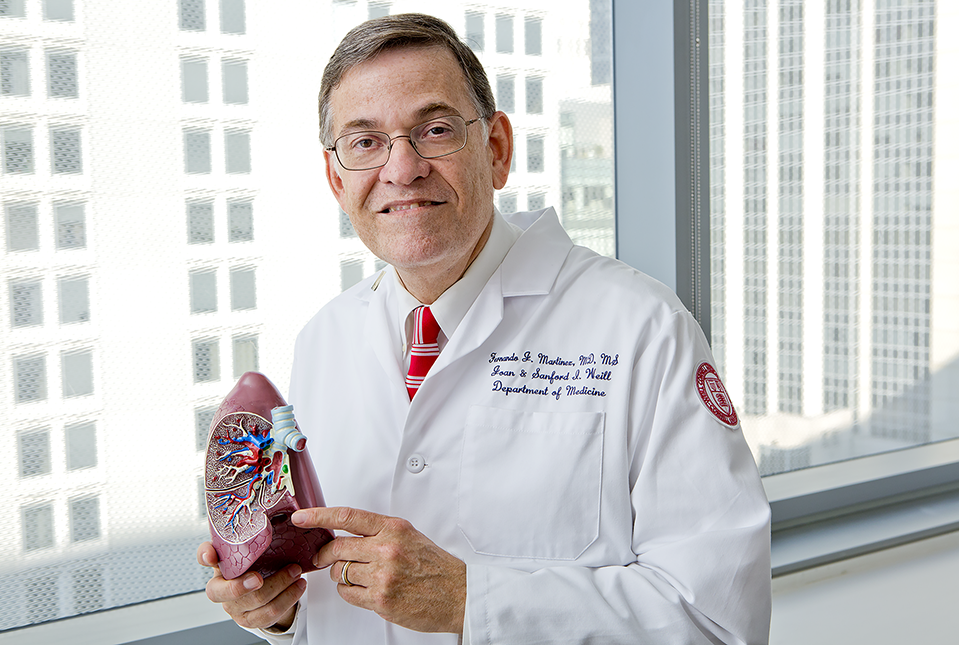 “PRECISIONS is the first comprehensive initiative that aims to move the management of idiopathic pulmonary fibrosis into the precision medicine era,” said Dr. Martinez, who is also the Bruce Webster Professor of Internal Medicine and a professor of genetic medicine in the Weill Department of Medicine at Weill Cornell Medicine and a pulmonologist at NewYork-Presbyterian/Weill Cornell Medical Center. “Such targeted therapy may be a significant advance for a specific group of patients, providing new insights about the biology of the disease that may drive the field into a new era.”

More than 200,000 Americans are living with pulmonary fibrosis, a progressive and deadly lung disease that scars lung tissue and makes it difficult to breathe. The cause of the most common form, IPF, is unknown. It is challenging to diagnose since the symptoms, which include persistent, dry cough, shortness of breath and fatigue, are similar to other respiratory conditions. Two medications approved by the U.S. Food and Drug Administration only slow the decline of lung function in patients with mild to moderate disease.

For the clinical trial, the investigators plan to recruit 200 IPF patients with a specific version of the TOLLIP gene, which is involved in regulating immune responses in the lungs. Patients will be randomized to receive either an inexpensive antioxidant N-acetylcysteine (NAC) or a placebo in a double-blind fashion. In an analysis of data from a previous clinical trial, Dr. Noth and colleagues discovered that about 25 percent of people with IPF with this version of the TOLLIP gene might benefit from treatment with NAC.

Patients for the NAC trial will be recruited through the Pulmonary Fibrosis Foundation’s Patient Registry and Biorepository. NewYork-Presbyterian/Weill Cornell Medical Center is one of 42 collaborating care centers nationwide that have enrolled patients in the registry.

In parallel with conducting the clinical trial, the investigators will examine biological differences that distinguish IPF from other ILDs by analyzing blood samples from patients in the registry. Using advanced molecular analysis they will aim to create risk scores associated with disease subtypes that may help doctors diagnose patients, predict their prognosis and response to therapy.

The researchers will also sequence patients’ genomes to establish the first and largest databank of genomic data for ILDs. They are aiming to identify genetic variants associated with a higher risk for disease.

“Patients have been involved in the development of the study from the beginning, and multiple investigators associated with the Pulmonary Fibrosis Foundation are contributing their scientific expertise,” Dr. Martinez said. “Thanks to the support of patients, partners, investigators and funding organizations, we are excited to see the PRECISIONS study begin.”

The study is supported by NHLBI grant number HL145266.