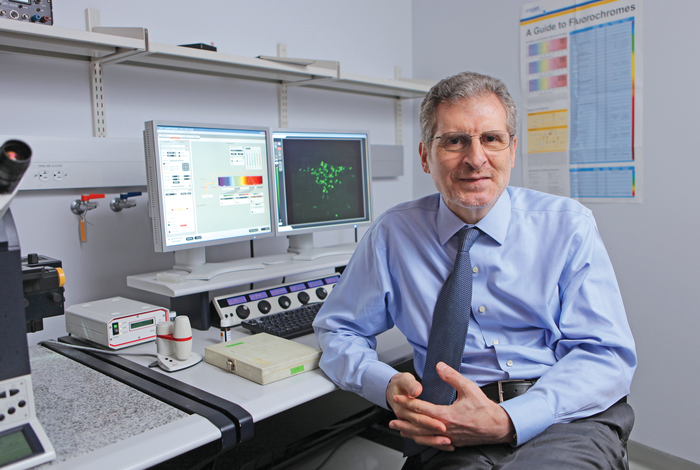 Dr. Costantino Iadecola, director of the Feil Family Brain and Mind Research Institute and the Anne Parrish Titzell Professor of Neurology at Weill Cornell Medicine, has been recognized as a 2019 Distinguished Scientist by the American Heart Association for his outstanding contributions to cardiovascular, stroke and dementia research.

The American Heart Association (AHA) honored Dr. Iadecola Nov. 17 during its Scientific Sessions meeting in Philadelphia.  Sessions is the largest scientific meeting sponsored by the AHA that highlights the latest cutting-edge science and education, and features the world’s top leaders, in the areas of cardiovascular disease.

“This was unexpected but obviously humbling, considering the scientists who have been recognized in previous years,” said Dr. Iadecola, who is also a professor of neuroscience. “It’s very rewarding to see the AHA community appreciate our work and I accept this recognition on behalf of my colleagues at Weill Cornell Medicine. I work with an amazing group of people who have been with me for over a decade. My colleagues here at the Feil Family Brain and Mind Institute and at Weill Cornell Medicine have been very supportive, which has been crucial to the scientific progress we have made.”

A renowned expert in the field of cerebrovascular diseases including stroke and dementia, Dr. Iadecola has spent decades researching the way the brain receives blood flow from the heart and how blood vessels keep the brain healthy. The centerpiece of his career is his research related to the overlap between two major diseases that have traditional been considered distinct: stroke and Alzheimer’s disease. He has published over 350 studies in top-tier journals, such as Nature, Nature Neuroscience, Nature Medicine and Circulation Research, illuminating the cellular and molecular basis of cerebrovascular regulation, stroke and vascular contributions to Alzheimer’s disease. He is one of the most cited scientists in the world according to Clarivate Analytics.

Through his research, Dr. Iadecola has been able to successfully integrate concepts and approaches from different disciplines, notably highlighting how blood vessels have a profound effect on the way the brain reacts to Alzheimer’s disease. He also championed the role of inflammation, innate immunity and the microbiome in stroke and dementia.

“The neuroscience, vascular biology, stroke and Alzheimer’s research communities – they all travel on different orbits,” Dr. Iadecola said. “But throughout my career I’ve been like an electron jumping from orbit to orbit, learning from different disciplines, trying to figure out where the commonalities and differences are. I’ve always been driven to learn from other fields, and I try to apply this knowledge to investigate what causes damage to the brain and how to preserve brain health. This is how we discovered that brain vessels are also involved in neurodegenerative diseases, like Alzheimer’s.”