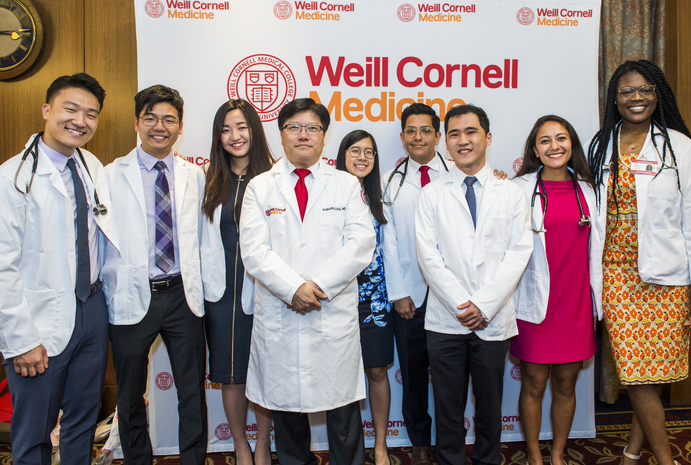 Watch a video of the entire White Coat Ceremony.

Indrani Guzman Das discovered a passion for medicine through her parents: her mom a nurse, her dad a doctor. They instilled in her the importance of giving back to the community and modeled healthcare delivery as one way to achieve that.

Guzman Das, 25, of New York City, also saw patient care first-hand. She lost her mom to cancer when she was 14, and her dad had a stroke while she was in college that forced him into early retirement. That experience—coupled with her very first job as a lab tech growing cells at Weill Cornell Medicine—inspired her to become a doctor. Now a first-year medical student at Weill Cornell Medicine, Guzman Das is striving to help her community, with a particular emphasis on making access to quality healthcare equal for everyone. 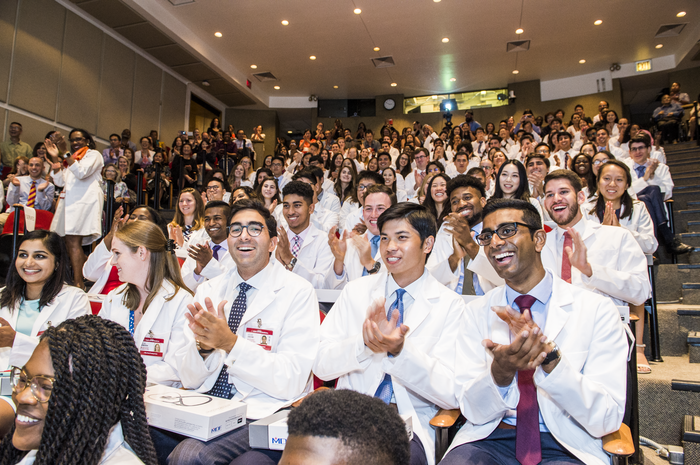 “The white coat is a symbol of us taking on our responsibilities as physician-advocates and joining this community of people serving a city I grew up in,” she said. “Being a person of color living in New York City, I want to close healthcare disparities and make healthcare more efficient.”

On Aug. 20, Guzman Das and 105 of her fellow classmates in the Class of 2023 received their short white coats during Weill Cornell Medicine’s annual White Coat Ceremony. In front of friends and family in Uris Auditorium, students joined faculty members on stage to receive their new coats and stethoscopes, supported by the Moss Family Foundation and the Paul F. Miskovitz, M.D. ’75 Stethoscope Fund for Medical Students. The ceremony officially marked the beginning of their medical education.

“When you put on your white coats for the first time today, you’ll be joining a noble profession—one that carries enormous responsibilities as well as rewards,” said Dr. Augustine M.K. Choi, the Stephen and Suzanne Weiss Dean of Weill Cornell Medicine and Cornell’s provost for medical affairs. “As doctors in training, you are on a path that seeks to relieve human suffering and to promote human wellbeing. Patients will look to you in times of need and literally put themselves in your hands. Today marks the first step in the path of learning to care for patients.”

The White Coat Ceremony is as much a rite of passage for aspiring physicians as it is a time for them to reflect on the journeys that led them to medical school and the responsibilities they will take on as doctors.

First-year medical student Shabnam Eghbali, 24, of San Diego, explored various approaches to a career in the life sciences before arriving at medicine. After graduating from the University of Pennsylvania with bachelor’s degrees in biology and finance, Eghbali spent two years working in biopharmaceutical mergers and acquisitions. The experience exposed her to the art and science of drug development, clinical trial design, and how drugs ultimately reach patients, she said.

“I began to understand the importance of patient interaction and of understanding the patient’s perspective when trying to cure the disease,” said Eghbali, who chose Weill Cornell Medicine for its urban environment and New York City’s diverse patient population, the medical college’s small class size, and its “unparalleled” research opportunities.

The Class of 2023 adds to Weill Cornell Medicine’s diverse community. Its students, nearly two-thirds of whom are bilingual, hail from 16 countries. Women comprise more than half the class, and 23 percent are from groups that are underrepresented in medicine. Four students are graduates of the institution’s summer premedical programs, which seek to expose minority and economically disadvantaged undergraduate students to science and medicine. Nine students are Cornell graduates and another nine have earned master’s degrees. Now as Weill Cornell students, they are joining a storied history of exemplary patient care, groundbreaking biomedical research and innovative medical education. 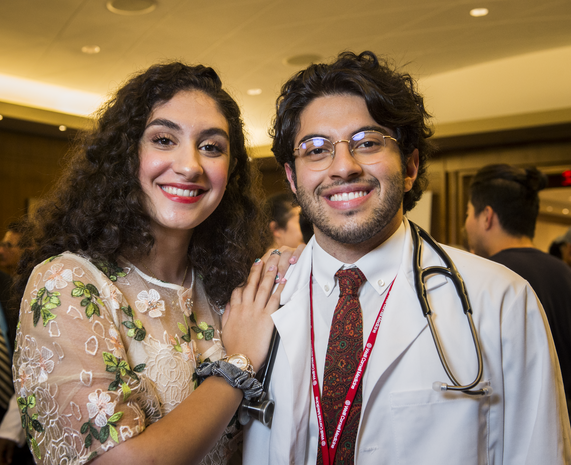 “Please remember that although the white coat is the uniform of our profession, there will not be uniformity in what you do,” said Dr. Yoon Kang, acting senior associate dean of education and the Richard P. Cohen, M.D. Associate Professor of Medical Education. “You, members of the Class of 2023, bring an unparalleled combination of diversity of thought and experience, intellectual firepower, and unlimited curiosity to Weill Cornell Medicine—and we are committed to you. You are the future of medicine.”

As they pursue their medical and scientific studies, keynote speaker Dr. Philip Stieg urged the students to keep in mind key attributes that make a great doctor: integrity, collegiality, compassion and resilience.

“Find for yourselves where you can grow and expand these virtues personally and as a group,” said Dr. Stieg, chairman of the Department of Neurological Surgery at Weill Cornell Medicine and founder of its Brain and Spine Center. “It is my hope that you will find in medicine, other students, residents, mentors and, most importantly, your patients, the insight into your intellectual and spiritual soul that will enable you to continue to grow throughout your life.”

As a high school student in Iran, Arsalan Haghdel read a historical novel about an ancient Egyptian physician who after his medical training returned to his community to help those in need.

“That’s the first time I realized the role a doctor has in society, and it resonated with me and who I wanted to become in the future,” said first-year medical student Haghdel, 23, who moved from the Iranian city Shiraz to the United States when he was 16. “I hope to become a leader in global medicine and help people in need so that they can live their lives to the fullest. To study at an institution that is a world leader in the field is an exceptional opportunity.