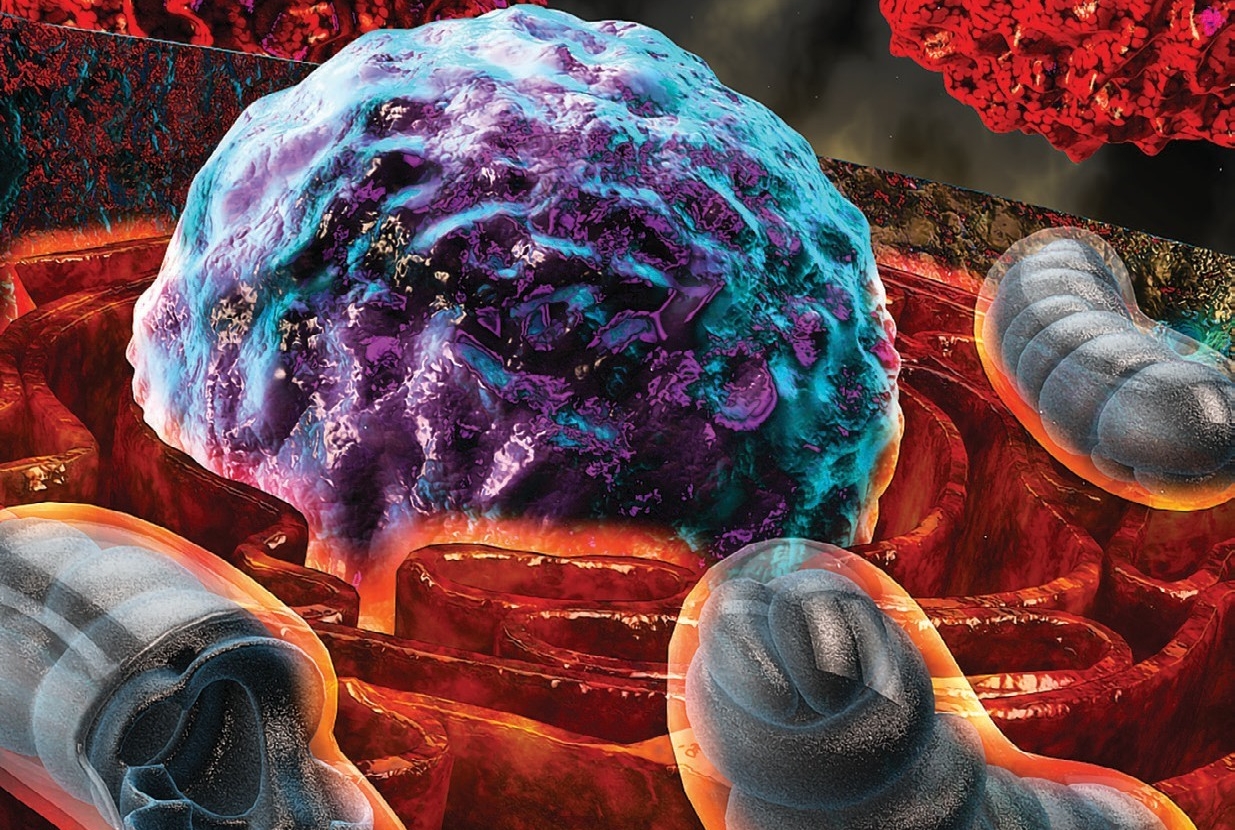 Dr. Juan Cubillos-Ruiz got his first look at ovarian cancer early in his doctoral research, which focused on understanding how the microenvironment of a tumor affects a patient’s immune system. “It was one of my first experiments,” recalls Dr. Cubillos-Ruiz, now an assistant professor of microbiology and immunology in obstetrics and gynecology at Weill Cornell Medicine, where he is also a member of the Sandra and Edward Meyer Cancer Center. “I got a specimen from a patient to analyze, and I was absolutely shocked by what an ovarian tumor looks like. It’s a monster.”

As Dr. Cubillos-Ruiz explains, ovarian tumors tend to grow especially large, both because the cancer grows quickly and because diagnosis is often delayed. Early symptoms—such as fatigue, bloating and irregular menstrual periods—can be vague enough to go unnoticed. In the vast majority of patients, the cancer has already metastasized by the time it’s identified, so traditional treatments like chemotherapy are much less effective. Despite recent advances against many other cancers, the five-year survival rate for metastatic ovarian cancer still hovers around 27 percent, and has for decades.

It’s a grim figure—but recent work by Dr. Cubillos-Ruiz and his team at Weill Cornell Medicine is deepening scientists’ understanding of the complex interaction between the immune system and this highly aggressive malignancy. Their work with mouse models of disease and analyses of human ovarian tumors, including a recent study published in Nature, is already informing the development of new treatments that are currently being tested pre-clinically. “Right now, if a woman is diagnosed with late-stage ovarian cancer, she has a very bad prognosis,” says Dr. Cubillos-Ruiz. “But this brings a beacon of hope.” 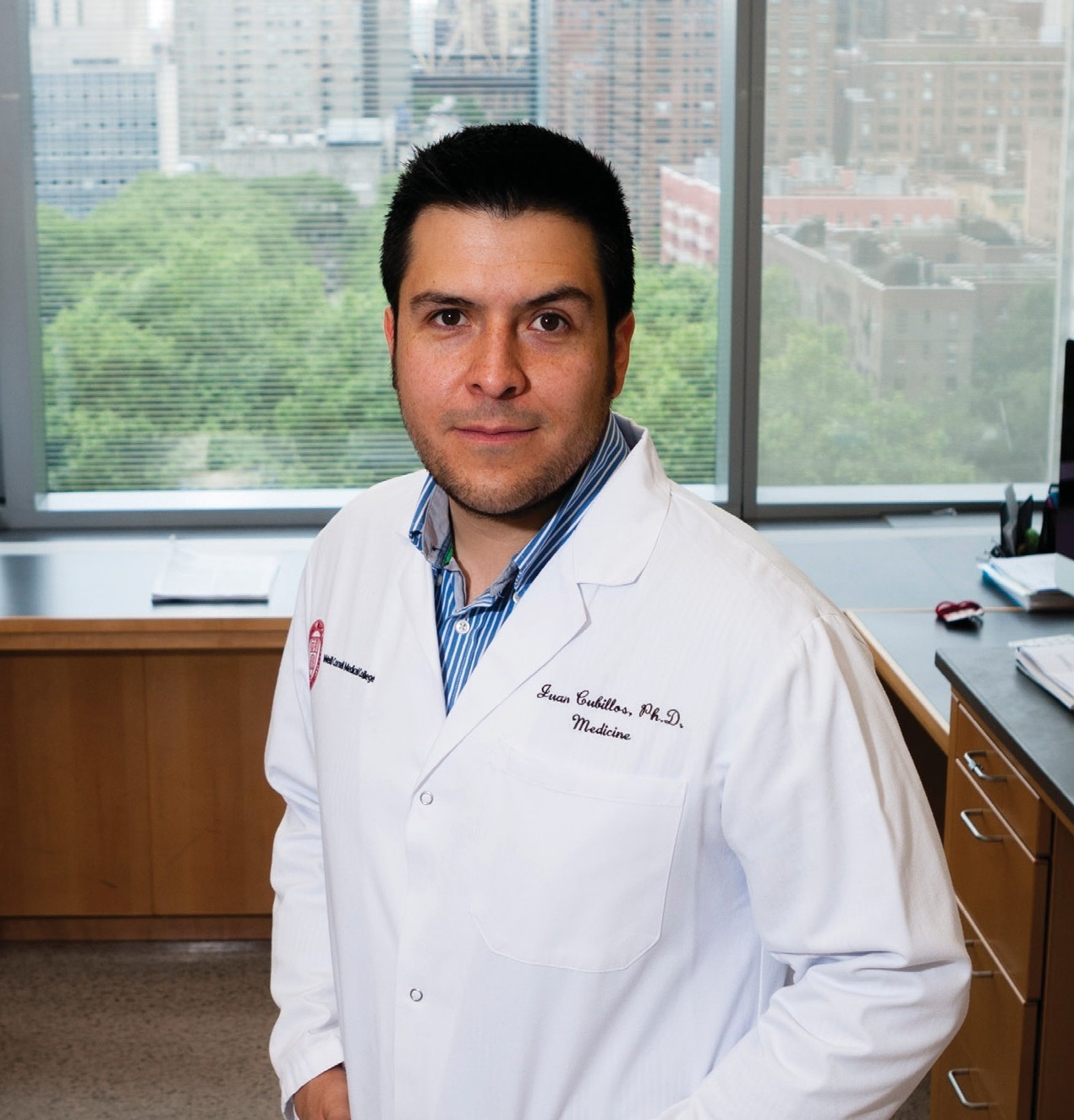 One reason why ovarian cancer has remained so frustrating is that it resists one of oncology’s most promising new tools. Immunotherapy essentially takes the brakes off a patient’s immune system, allowing it to hunt down and destroy cancer cells. In various cancers, including melanoma and lung cancer, immunotherapy has saved the lives of patients who just a few years ago might have been considered terminal. It’s often much more effective than standard treatments like chemotherapy—and if it could be made to work in ovarian cancer, it could save thousands of women’s lives. “Immunotherapy is an incredible breakthrough,” Dr. Cubillos-Ruiz says. “But ovarian cancer has evolved multiple strategies to inhibit the protective function of immune cells.”

For more than a decade—first through his PhD work at the Geisel School of Medicine at Dartmouth, then during postdocs at Harvard and Weill Cornell Medicine and finally in his own lab, which he started in 2015—Dr. Cubillos-Ruiz has sought to understand why ovarian cancer is so different and immune-suppressive. The answer, it seems, has to do with its microenvironment—the mix of cells, the presence or absence of different compounds and other conditions inside a tumor—and its effect on an intracellular structure called the endoplasmic reticulum, or ER. “The endoplasmic reticulum is tremendously important,” Dr. Cubillos-Ruiz explains, “because it’s involved in the synthesis of all the proteins that will be located on the surface or secreted out of the cell.”

One crucial job of the ER is the folding of proteins, which can’t function correctly if their three-dimensional configuration is altered. Improperly folded proteins accumulate in the ER, like broken widgets jamming the works of a factory. This induces a state known as “ER stress,” which prevents the cell from fulfilling its role in the body. Dr. Cubillos-Ruiz and his team have shown that in ovarian cancer, the lack of nutrients inside the tumor alters the protein-folding ability of the ER within T-cells, the immune cells that destroy invaders. “Immune cells need nutrients to properly form and fold proteins in the ER,” Dr. Cubillos-Ruiz explains. “If, for example, cancer cells are stealing glucose from immune cells, that will immediately trigger ER stress because there’s an accumulation of those misfolded proteins. We discovered these adverse conditions inside the tumor are constantly triggering ER stress in the T-cell, which acts as a brake that blocks their protective anti-cancer activity.”

This new understanding of how ovarian cancer affects the immune system could point the way to treatments that prevent or control the ER stress response within T-cells, which could in turn unleash a patient’s immune system to fight the tumor. This could involve genetic tools that silence the expression of ER stress sensors within T-cells, or new drugs that could bind to and block those sensors. Dr. Cubillos-Ruiz is a co-founder of and scientific adviser to a start-up biotech company, Quentis Therapeutics, which was established around core technology arising from his research, under agreements generated and negotiated by both Cornell’s Center for Technology Licensing at Weill Cornell Medicine and Weill Cornell Medicine’s Office of BioPharma Alliances & Research Collaborations. Quentis is already working to develop drugs that target a cellular pathway Dr. Cubillos-Ruiz and his team have identified. “Developing these new forms of immunotherapy will be challenging,” he says, “but we’re very excited.”