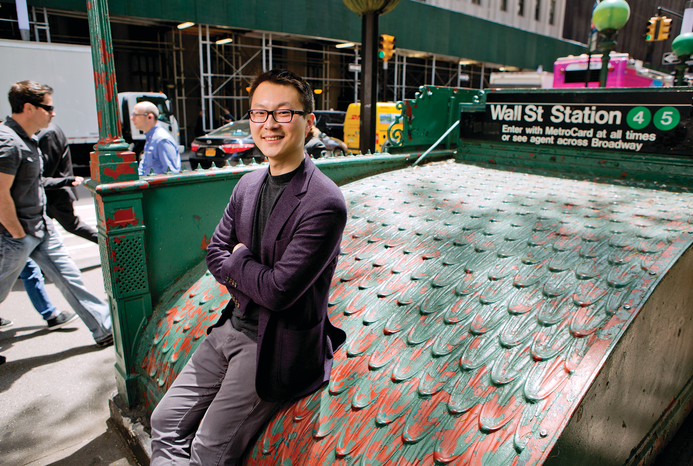 As a student in immunology and microbial pathogenesis at the Weill Cornell Graduate School of Medical Sciences, Dr. Ting Jia published eight papers in top journals, including four as first author. Working with Dr. Eric Pamer—a member of Memorial Sloan Kettering Cancer Center, where he serves as head of the Division of Subspecialty Medicine and the Enid A. Haupt Chair in Clinical Investigation—Dr. Jia explored how immune cells and signaling proteins migrate from bone marrow to points of inflammation. Not only did he graduate in just four years and three months, he produced research results that have been cited more than 2,200 times in other publications.

Dr. Jia (who goes by the nickname “T.J.”) went on to do a postdoc in the Pamer laboratory at Sloan Kettering, and he was clearly on track to run his own lab one day—so his professors, classmates and family were surprised when he opted to pursue a career in finance. “My father is a marine chemist and my mom’s a physician, so I guess part of them always wanted me to be a scientist or a doctor,” says Dr. Jia, who grew up in China and earned his bachelor’s degree in biological sciences at Sun Yat-sen University in Guangzhou. His shift to the business world, he says, “was uncharted territory for them.”

Dr. Pamer, who is also a professor of medicine at Weill Cornell Medicine, confesses to being surprised when Dr. Jia announced his career plans. “Ting is super smart, and he had a lot of potential as an immunologist,” he says. “His work made a real impact. I still see him as a scientist.” To Dr. Jia, however, the move made sense—because he, too, still sees himself as a scientist. But instead of making advances in the lab, he uses his background to inform decisions about whether biotech and life science ventures have the potential to become profitable companies, and whether the therapeutic advances they’re developing will ultimately benefit patients. “In healthcare or biotech investments, the value of a company is really reflected by its clinical data—and one predictive factor of clinical outcome is the underlying biology,” he says. “My PhD and postdoc training equipped me to thoroughly understand the biology in a short period of time. For example, if I meet with a new company and they say, ‘We’re working on a particular target, a protein called ABC,’ I can immediately—even while I’m still in the meeting—go on PubMed, read through key articles quickly, extract information, synthesize it and ask thoughtful questions on the spot.”

Dr. Jia’s first job after graduation was as a management consultant with McKinsey & Company, where he learned as much as he could about pharmaceutical R&D and biotech mergers and acquisitions. He then joined the private investment firm BVF Partners in San Francisco before spending three years building up the New York office of Hillhouse Capital, a Hong Kong-based investment management firm. This fall, he founded his own healthcare-focused fund, dubbed Octagon Investments. The numeral “8”, he notes, symbolizes “fortune” in Chinese culture—and when turned on its side, it resembles an infinity sign. Says Dr. Jia: “I want to support infinite innovation in the biotech space and generate handsome returns for my investors.” The new fund will not only invest in companies in the United States and Europe, but explore potential opportunities in China. “When I look at the trend in healthcare, undoubtedly innovation becomes more and more globalized,” he says. “I believe a lot of value can be unlocked by exploring synergies between the West and the East.”

How does Dr. Jia decide if a company is worthy of investment? He and his team pore over journals, attend medical and scientific conferences, and steep themselves in the research upon which each promising start-up is based. “We like to invest in companies that have a strong biology rationale—for example, where a gene has been identified that is linked strongly with the targeted disease,” he explains. Dr. Jia is also careful to examine the reputations and qualifications of a company’s leaders, trying to understand how they think and work. Dr. Jia notes that while his research background has been useful when evaluating immunology-related ventures, he often taps a broader skill set he developed at Weill Cornell Medicine. “PhD training is more than just knowledge in a specific area,” he says. “It’s about logical and critical thinking.”

Dr. Jia says he sometimes misses life as a bench scientist, but has no regrets about leaving academia. He notes that PhD research consists of “digging into a very, very specialized project,” whereas his current work allows him to think more broadly. “The way my brain is wired is more about collecting information from a vast field, then processing it and connecting the dots,” he says. “Investing is a perfect blend of people, science, business and finance. I hope my experience and skill set will allow me to make investments in innovations that improve patients’ lives.”