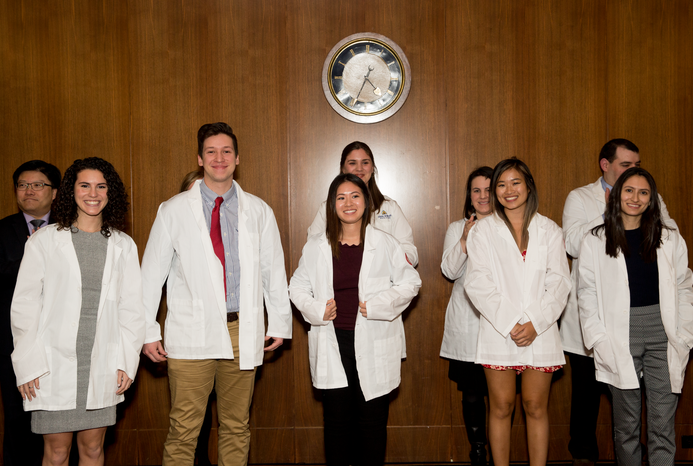 Melissa Steadman is not new to healthcare: The Massachusetts native attended pharmacy school for a year and worked as an EMT after college. But it was a volunteer job at a free clinic that made her realize that she wanted a more hands-on role in patients’ lives as a physician assistant.

“At the clinic I saw that I made a real impact on people’s lives,” she said. “I realized that I want to work directly with patients, be there for them. PAs make a real connection with patients, so this was a natural choice.”

Now she’s pursuing her passion as a student in Weill Cornell Graduate School of Medical Science’s Master of Science in Health Sciences for Physician Assistants program. On Feb. 25, Steadman was one of 42 students in the Class of 2021 to earn their short white coats during the annual white coat ceremony, launching the next phase of their medical careers. 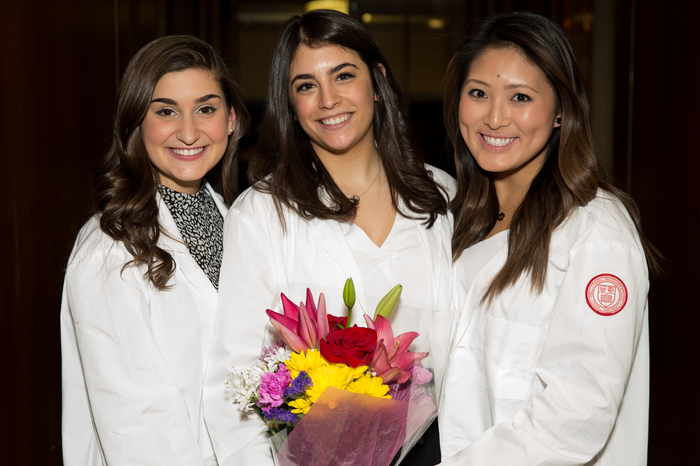 The PA role is historically grounded in that connection to patients. PAs date to the 1960s in the United States, when the position was created to relieve a nationwide primary care shortage. Today, more than 100,000 PAs practice across the country in specialties ranging from primary care to surgery, and programs graduate increasing numbers of PAs every year. In fact, the Bureau of U.S. Labor Statistics projects that the number of PAs will increase 37 percent from 2016 to 2026. At the same time, the country is expected to have a shortage of physicians, related in part to the increasing life expectancy of the population as a whole, making the training of PAs even more important to the workforce.

Weill Cornell Medicine’s program reflects that trend, says Dr. Gerard Marciano, co-chair and director of the Physician Assistant Program at the Weill Cornell Graduate School of Medical Sciences. “In 2017, we started increasing student enrollment from 32 up to 52 over the next four years, so we’re increasing each class by five students to hit that number.”

The rigorous 26-month program prepares graduates to work in any specialty they prefer on completion. An elective track allows them to tailor their training to their interests, but the program’s strength in general medicine allows for career flexibility into the future.

PA and 2017 graduate Sophia Corrigan was attracted to the idea of the medical field in part for the flexibility. “Going to medical school would have meant choosing a specialty and staying with it for the rest of my career,” she said. “Becoming a PA has an enormous amount of flexibility in comparison.”

Corrigan now works at Johns Hopkins Medicine in orthopedic surgery, where she cares for inpatients during the post-operative period of their recovery and assists in surgery several times a month. “I get the best of both worlds,” she said. “I spend time with patients, educating them and attending to their needs in the hospital, but I also am challenged to expand my skills in the OR.”

Everyone benefits from that rigor; the presence of PAs in a healthcare setting is good for patients, too.  Indeed, more than 400,000 patients each year in the United States interact with a PA and 92 percent of them credit PAs with greater ease of getting an appointment. And a 2017 study in the journal Medical Care found that there was no difference in the quality of care provided by primary care physicians versus PAs, but PAs were also more likely to offer health education and counseling to their patients.That flexibility, combined with the potential for lateral mobility within the profession, is a huge draw for many applicants, said Lisa Doron, PA, an instructor of physician assistant studies in Medicine, and a 2009 graduate of the program who pursued a PA degree after starting her career as a dietitian. After graduation, Doron worked for almost a decade in internal medicine at NewYork-Presbyterian/Columbia University Medical Center, then at Memorial Sloan Kettering Cancer Center, before joining the Weill Cornell Medicine faculty full-time last year. “PA training is hard, but that intensity means that we are trained to do anything, really,” she said. “It’s such a great profession.”

“We provide critical personal care for patients,” Doron said. “I could not have chosen a better profession for making a difference.”