Dr. Carl Nathan, chairman of the Department of Microbiology and Immunology at Weill Cornell Medicine, has been awarded the institution’s Joan and Sanford I. Weill Exemplary Achievement Award.

The Weill Award was established in 2018 to celebrate the 20th anniversary of the medical college’s renaming in honor of Weill Cornell Medicine’s foremost benefactors, Joan and Sanford I. Weill. The Weill Award recognizes outstanding faculty members whose transformational work enhances health and healthcare worldwide. Dr. Nathan accepted the award during a gala on March 5.

“I’m truly humbled by this award,” said Dr. Nathan, the R.A. Rees Pritchett Professor of Microbiology and Immunology and director of the Abby and Howard P. Milstein Program in Chemical Biology and Translational Medicine at Weill Cornell Medicine. “It’s baffling to be rewarded for having fun— and it has been great fun being curious about how molecules work in people and how people work in teams. But chiefly, the main feeling is gratitude for the people in the teams I’ve worked with and the opportunities I’ve had at Weill Cornell Medicine.”

A scientific legend, Dr. Nathan is one of the world’s leading authorities on tuberculosis and an outspoken proponent of the need to develop new antibiotics. He was the founding director of the Tri-Institutional M.D.-Ph.D. program between Weill Cornell Medicine, Memorial Sloan Kettering Cancer Center and The Rockefeller University, and led the planning team for the Tri-Institutional Therapeutics Discovery Institute (Tri-I TDI), where he is now a member of the board of directors. 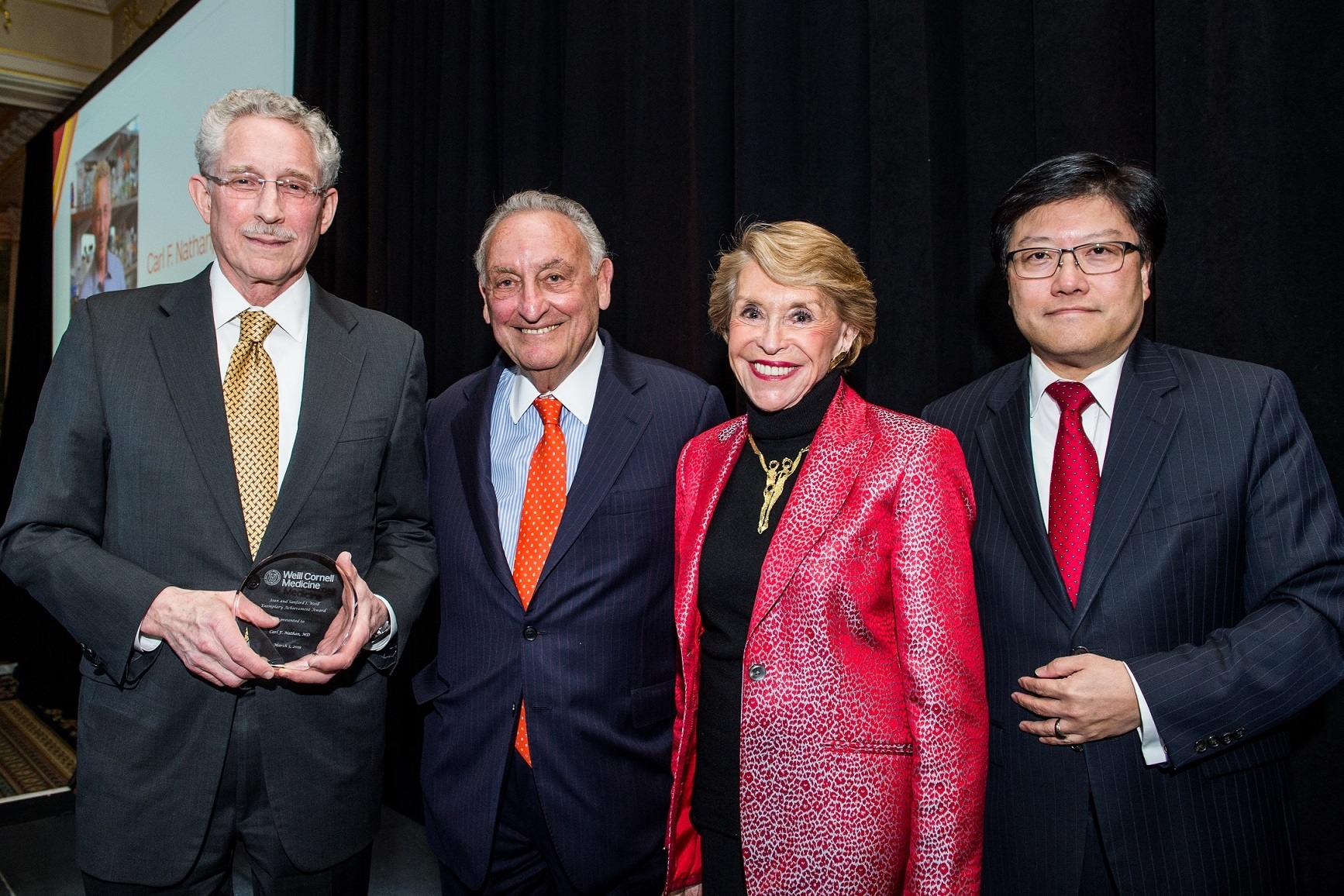 Dr. Nathan began his research as a medical student and oncology fellow, and continued when he led his own group within a laboratory at The Rockefeller University. The Nathan Lab at Weill Cornell Medicine, established in 1986, is multidisciplinary and highly collaborative.  Much of its work with academic and industrial partners takes place via the Bill & Melinda Gates Foundation’s TB Drug Accelerator program and the NIH-funded Tri-Institutional TB Research Unit, for which Dr. Nathan is the principal investigator. Dr. Nathan’s research findings have improved scientists’ understanding of how the immune system works in infectious disease, cancer and metabolism.

“Carl has been one of Weill Cornell Medicine’s most accomplished scientists for more than 30 years – a highly regarded leader who exemplifies our mission to care, discover and teach,” said Dr. Augustine M.K. Choi, the Stephen and Suzanne Weiss Dean of Weill Cornell Medicine. “He has been a mentor to many, including myself, and has helped to steer our institution’s course and make it a leading academic medical institution.”

The Weill Award carries a $50,000 cash prize, which Dr. Nathan gifted to Weill Cornell Medicine in support of two programs. The gift will establish a fund that provides stipends to high school students conducting research in laboratories at Weill Cornell Medicine and Weill Cornell Graduate School of Medical Sciences. It will also support the work of GHESKIO Centers in Port-au-Prince, Haiti, which provides HIV/AIDS care, primary and prenatal care, and treatment of tuberculosis and cholera. Its director, Dr. Jean William Pape (MD ’75), the Howard and Carol Holtzmann Professor of Clinical Medicine, was the inaugural Weill Award recipient.