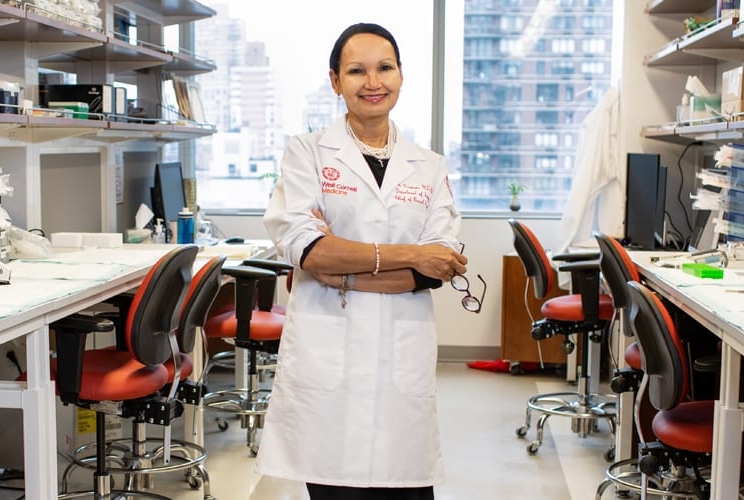 I have many fond memories of watching the soap opera General Hospital with my mom after school. The character of Dr. Lesley Webber became a role model for me. She always seemed sharp, focused and capable no matter how much chaos and drama surrounded her.

I was extremely fortunate to have been raised in a family of hardworking and highly principled individuals, but there were no physicians in the family, and so General Hospital was my first exposure to medicine. In a country that is characterized by the strength of diversity, an unfortunate reality is that minorities such as African-Americans and Latino Americans are underrepresented in medicine; inspiration to pursue a career in healthcare can originate from unique sources.

My parents always encouraged commitment to community as well as family, and I couldn’t imagine a profession more gratifying than one where each day brings an opportunity to help others. My mom and dad lived the Harlem version of the American dream. My older sister, younger brother and I have always loved hearing our parents recount stories of how their work ethic, and family values were rewarded by success after starting with very few resources. My maternal grandfather died at a young age because he could not afford treatment for pneumonia, leaving his wife to raise three daughters on her own. My paternal grandparents both immigrated as teenagers to New York City through Ellis Island from the tiny Caribbean island of Dominica, and they met in Harlem through a Dominican civic association.

My dad was the youngest of the five; he was rather rambunctious and ended up dropping out of school. But then he met my mom — an incredibly strong, gorgeous woman who recognized something special in this young man and provided exactly the kind of guidance that he needed. My father obtained his GED while serving in the U.S. Marine Corps and was then able to go to college on the GI Bill. He went on to attend Brooklyn Law School, supported by my mother’s work as a secretary.

As my father’s law practice became more successful, we left New York City, and I went to public school on Long Island. At some point, I became determined to attend Harvard University. I was extremely studious but remained active with a variety of extracurricular activities such as volunteer work and cheerleading. My four years at Harvard were absolutely phenomenal, and my soap opera-inspired interest in medicine never wavered. This career goal was amplified by my experiences with volunteer work at Massachusetts General Hospital. After graduation, I returned to New York to attend medical school at the State University of New York Downstate Medical Center in Brooklyn.

I discovered my love for surgery in medical school. I enjoyed all of my clinical rotations, including pediatrics, internal medicine and obstetrics-gynecology, but once I set foot in the operating room, I could not consider any other career path. To identify a problem and then be able to fix it surgically is exhilarating and tremendously gratifying, as is the close relationship that develops between the surgeon and patient, as well as that patient’s family and support system.

The intensity of these relationships is heightened in the field of oncology. The sense of responsibility that accompanies caring for patients when they are dealing with a new cancer diagnosis is especially daunting. Fortunately, however, we have made many exciting advances in oncology, and especially in the management of breast cancer. One of the best aspects of my job is that I can tell the majority of my breast cancer patients that with proper treatment, they can expect a terrific outcome.

After graduating from medical school, I pursued residency training in general surgery at SUNY Downstate, and then remained on staff with the department of surgery there. In the 1990s, during my early years as a general surgeon in Brooklyn, with its diverse patient population, I became very disturbed by some of the patterns that I was noticing in my breast cancer patients. My African-American patients were typically younger than my white American patients, and they also tended to have larger, bulkier tumors; most tragic was that they were also more likely to have cancers that were resistant to the standard treatments available during that era.

At that time, we did not have quite as clear an understanding of the heterogeneity of breast cancer subtypes that we have now. We therefore had not yet documented some of the facts that are now well-established with national data, that African-American women are indeed more likely to develop cancers that are biologically more aggressive, and at younger ages. I wanted to be involved with research that would explain these variations, and this motivated my pursuit of additional training in surgical oncology, as well as in epidemiology. This led to my fellowship training at the MD Anderson Cancer Center in Houston, where I subsequently joined the faculty, and to my Master of Public Health from Harvard.

Eventually, I was able to establish the International Center for the Study of Breast Cancer Subtypes. This program, now headquartered at Weill Cornell Medicine and NewYork-Presbyterian, studies breast tumor biology associated with the complex genetics of globally diverse racial/ethnic groups while also investing in the health services of impoverished communities in Africa. Our mission is to reduce the global breast cancer burden through advances in research and delivery of care to diverse populations worldwide.

Through our research, we have found that one particularly aggressive breast cancer pattern known as triple-negative breast cancer, meaning that the three most common types of receptors known to fuel breast cancer growth are not present on the tumor, is indeed associated with African ancestry and is specifically associated with Western Sub-Saharan African ancestry. We are currently funded to further explore this hypothesis through the development of a field of research that we have named oncologic anthropology. Our breast cancer research group is now in the process of identifying the actual genetic features that account for the international variations in breast cancer risk that we have observed.

Our research is vital in the effort to understand breast cancer disparities between diverse populations here in America, and it is also relevant to the broader goal of characterizing the root causes of breast cancer, an effort that is clearly meaningful throughout the world.

Our clinical team includes renowned experts in all breast oncology disciplines, who join forces with our colleagues in nursing oncology, nurse navigation, genetic counseling, gynecology/fertility preservation, cardiac oncology and psych-oncology to provide the highest quality treatment while also addressing the personal goals and needs of each patient.

Every aspect of breast cancer care has advanced; as a result, these treatments have improved outcomes, and they are also better-tolerated. I am confident that breakthrough advances will continue. Through the collective endeavors of our multidisciplinary team working in partnership with researchers and guided by insights from survivor advocates, as well as support provided by gracious funding agencies and donors, we can ensure that fewer women and men will suffer from breast cancer in the future.

One of the primary reasons I was drawn to NewYork-Presbyterian and Weill Cornell Medicine is the beautiful, robustly diverse patient population of this hospital system, including locations in Queens, Lower Manhattan and Brooklyn. This has been the ultimate homecoming experience for me, as a native New Yorker returning to the city where my parents and grandparents thrived through hard work and discipline, and now being able to strive toward making my own contributions to the community. I am enormously grateful for the incredible opportunities that I’ve had. My aim for each day is to be deserving of these blessings. I wake up every morning knowing that I have the honor of going to the greatest job in the world.

A version of this story first appeared in NewYork-Presbyterian's Health Matters.