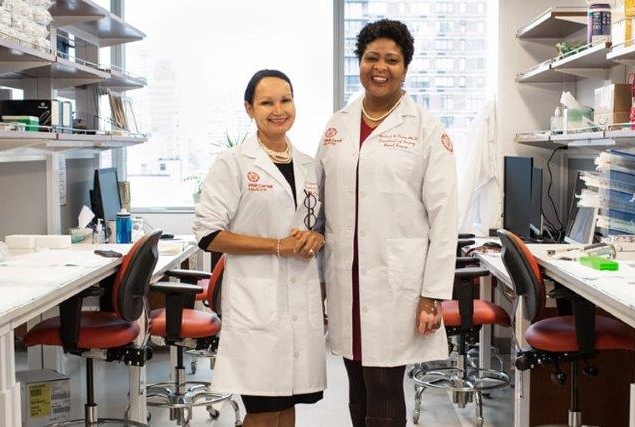 Dr. Lisa Newman (left) with her colleague, Dr. Melissa Davis, a geneticist who was recruited to Weill Cornell Medicine as an associate professor of cell and developmental biology research in surgery. Credit: NewYork-Presbyterian

Early in her career as a surgeon in Brooklyn, New York, Dr. Lisa Newman became concerned about the patterns of breast cancer in her African-American patients.

“They were typically younger than my white American patients, and they also tended to have larger, bulkier tumors,” she says of the African-American women she treated in the 1990s. “Most tragic was that they were also more likely to have cancers that were resistant to the standard treatments available during that era.”

These observations compelled her to pursue research looking into disparities in breast cancer between black and white women. What resulted was the establishment of the International Center for the Study of Breast Cancer Subtypes (ICSBCS), now headquartered at NewYork-Presbyterian and Weill Cornell Medicine, and tasked with enhancing breast cancer prevention and treatment through advances in research and delivery of care to diverse populations worldwide.

In her role there as founding medical director, Dr. Newman and her multidisciplinary research team study how and why breast cancer outcomes vary by patients’ race and ethnicity. One focus is the genetics of aggressive breast tumors, including triple-negative breast cancer, which does not respond to commonly available targeted therapies. It accounts for 15 to 20 percent of all breast cancer cases but occurs with greater frequency among African-American and younger women. Her group’s research is therefore uncovering genetic factors related to the root causes of breast cancer, particularly among premenopausal women. She also examines how socioeconomics affect early detection and access to treatment.

Dr. Newman says these patterns make sense if you look at maps of the slave trade from several hundred years ago.

“The trans-Atlantic slave trade brought Africans from West Africa across the ocean to serve as slaves in the colonies, but slave trade from East Africa mainly went further eastward, to the Mideast and to Asia,” she says. “And so, as African-Americans, we have more shared ancestry with Western Sub-Saharan Africans, including present-day Ghanaians, but not so much shared ancestry with East Africans. So, if there is something related to African ancestry as an inheritable marker of aggressive breast cancer, which is the premise of our research, it makes sense that the African-American women will have breast cancer patterns that are more similar to those of Ghanaian women, compared to the patterns that we see in Ethiopian women.”

This field of study is called oncologic anthropology, and Dr. Newman’s work involves a network of physicians and researchers in Ghana, Ethiopia, Nigeria, Uganda, Haiti, Barbados and Canada. These teams are conducting further investigations to try to identify what it is about Western Sub-Saharan African ancestry that predisposes African-American women to these patterns of breast cancer.

Much of this research is led by Dr. Melissa Davis, a geneticist recruited by Dr. Newman to Weill Cornell Medicine as an associate professor of cell and developmental biology research in surgery. Currently, Dr. Davis, who also serves as scientific director for the ICSBCS, is looking at circulating chemokines, tiny proteins secreted by cells, and their association with cancer development. She compares this balance of chemokines with genetic markers that are specific for women of Sub-Saharan African ancestry compared to women with other types of geographically defined ancestry.

“We are actually identifying some truly fascinating patterns that may not only explain race-associated variation in breast cancer, but the root causes of disease progression as well,” says Dr. Newman.

Dr. Lisa Newman has been an expert advisor to various associations, and is currently an advisory board member for the Susan G. Komen Breast Cancer Foundation.

A version of this story first appeared in NewYork-Presbyterian's Health Matters.