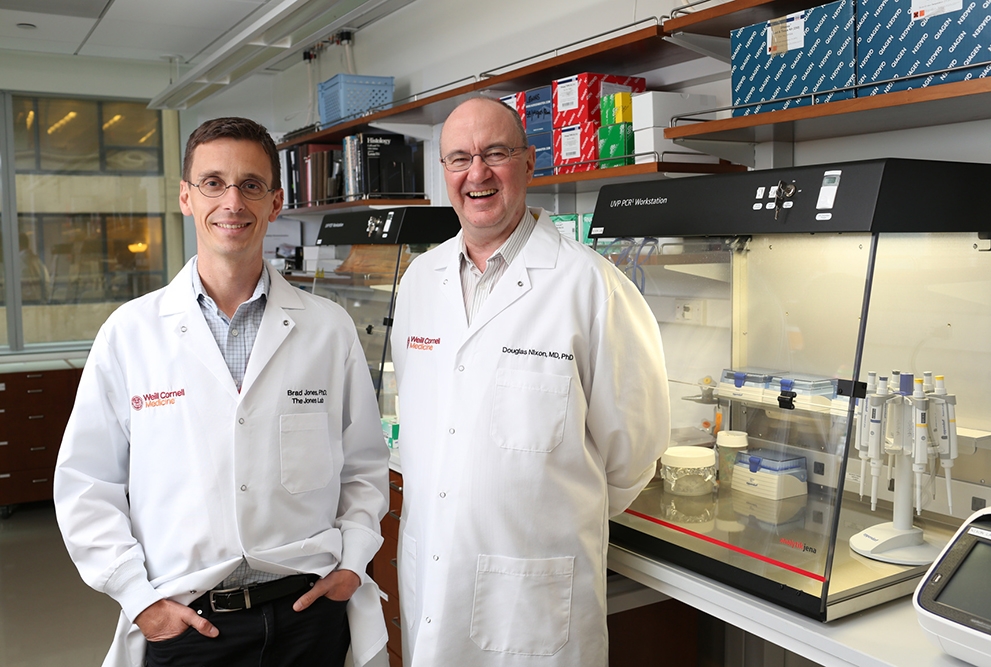 As therapies for HIV infection have advanced to help many patients control the infection as a chronic disease, investigators and patients have set their sights on a new goal—finding a cure. Leading HIV researchers Dr. Douglas Nixon and Dr. Brad Jones have recently joined Weill Cornell Medicine in the hopes of accelerating that hunt.

“We are nationally known for our HIV clinical research and our outstanding clinical care of people with HIV infections,” said Dr. Roy Gulick, chief of the Division of Infectious Diseases and principal investigator of the Cornell HIV Clinical Trials Unit at Weill Cornell Medicine. “Drs. Nixon and Jones expand that to bring an element of cutting-edge laboratory research.”

Together Drs. Nixon and Jones, who most recently worked at George Washington University in Washington, D.C., bring decades of experience studying the basic mechanisms that allow for human immunodeficiency virus to avoid the immune system. Now, they hope to collaborate with Weill Cornell Medicine clinicians and scientists to test their ideas in clinical trials.

“It’s a powerhouse for clinical trials for HIV in particular,” said Dr. Jones, an assistant professor of immunology in medicine. “That was a huge draw.”

Weill Cornell Medicine’s more than 30 years of HIV/AIDS clinical trial expertise will be particularly helpful in advancing work the team is doing with the Believe in a Cure Martin Delaney Collaboratory funded by a $28 million grant from the National Institutes of Health. The NIH awards the highly competitive grant to investigators with proven experience in innovative vaccine and immunotherapy research. Dr. Nixon is the principal investigator of the project and he and Dr. Jones collaborate with more than a dozen other scientists from Mexico, Canada and Brazil to find and advance the most promising approaches to an HIV cure.

Existing therapies for HIV can keep the virus in check and eliminate many of the symptoms associated with advanced AIDS, but if patients stop taking the medications the virus and symptoms come back. A cure would completely eliminate the virus or prevent it from causing symptoms, and may allow patients to discontinue HIV medications and avoid their side effects.

“We need a cure for HIV for a number of reasons that span from scientific to economic, but also to remove stigma from people living with HIV,” said Dr. Nixon, who was recruited to Weill Cornell Medicine as a professor of immunology in medicine in the Division of Infectious Diseases. Patients with HIV continue to face violence and discrimination in much of the world, he said, and even with successful treatment they may experience side effects or have shortened lifespans. Additionally, the cost of antiviral drug treatments poses a financial burden in many parts of the world.

Given the urgency of the need for a cure, Dr. Marshall Glesby, director of the Weill Cornell HIV Clinical Trials Unit, said he hopes his team’s experience with numerous multi-center trials through the AIDS Clinical Trials Group and their deep ties with the diverse population of people living with HIV in New York City will help expedite the development of a cure.

“We've been well established in HIV clinical research, but having these elite scientists who are working on the laboratory end of things right here at Weill Cornell is really a tremendous asset,” said Dr. Glesby, who is a professor of medicine in the Division of Infectious Diseases and a professor of healthcare policy and research. Drs. Glesby and Gulick are also speakers for the International Antiviral Society-USA. “We'll really be able to expand the breadth of what we are doing at Weill Cornell.”

“The study of HIV has been incredibly important in the study of human immunology because, by understanding the interaction between HIV and the immune system, we've learned more about the human immune system than we ever knew before,” Dr. Nixon said.

Drs. Nixon and Jones have several lines of research underway to meet the unique demands of the collaboratory. Investigators participating in the collaboratory are all trying multiple approaches and together they decide which should advance to clinical trials. This encourages some friendly competition to have your idea tested in a clinical trial, Dr. Nixon said, and also helps the program keep up with the rapidly evolving field of HIV research.

“We are charged with constantly responding to the newest advances in the field and refocusing our research priorities accordingly,” said Dr. Jones, who was recently selected to give a plenary lecture about HIV cure and vaccine research at the International AIDS Conference in Amsterdam in July.

The team is preparing to launch a preliminary clinical trial of a cell-based therapy for HIV in which a patient’s own immune cells are trained to target vulnerable parts of the virus in the laboratory and then infused back into the patient. That trial will begin this year in Washington, D.C., through the Children's National Research Institute, Whitman-Walker Health—a non profit community health center that serves the gay, lesbian, bisexual and transgender communities and individuals with HIV—and George Washington University.

They are also working to develop more effective “kick and kill” approaches to eliminating HIV. Dr. Robert Furler, the Believe Collaboratory grant’s project manager who also has joined Weill Cornell Medicine as assistant professor of immunology in medicine, explained that HIV is able to hide in a latent state in the body, avoiding detection and destruction by the immune system and antiretroviral drugs. So, many in the field have been studying ways to stir the virus out of latency to destroy it.

“One approach in the field is to use chemicals that reverse latency while enhancing the immune system through vaccination, antibody treatment or cell therapy,” Dr. Furler said. “Researchers in BELIEVE are testing several latency reversing agents in combination with cell therapies or addition of broadly neutralizing antibodies to HIV.”

“I want to keep kind of that pipeline going and keep expanding that,” he said, “so that there's a constant stream of things that can be tested.”