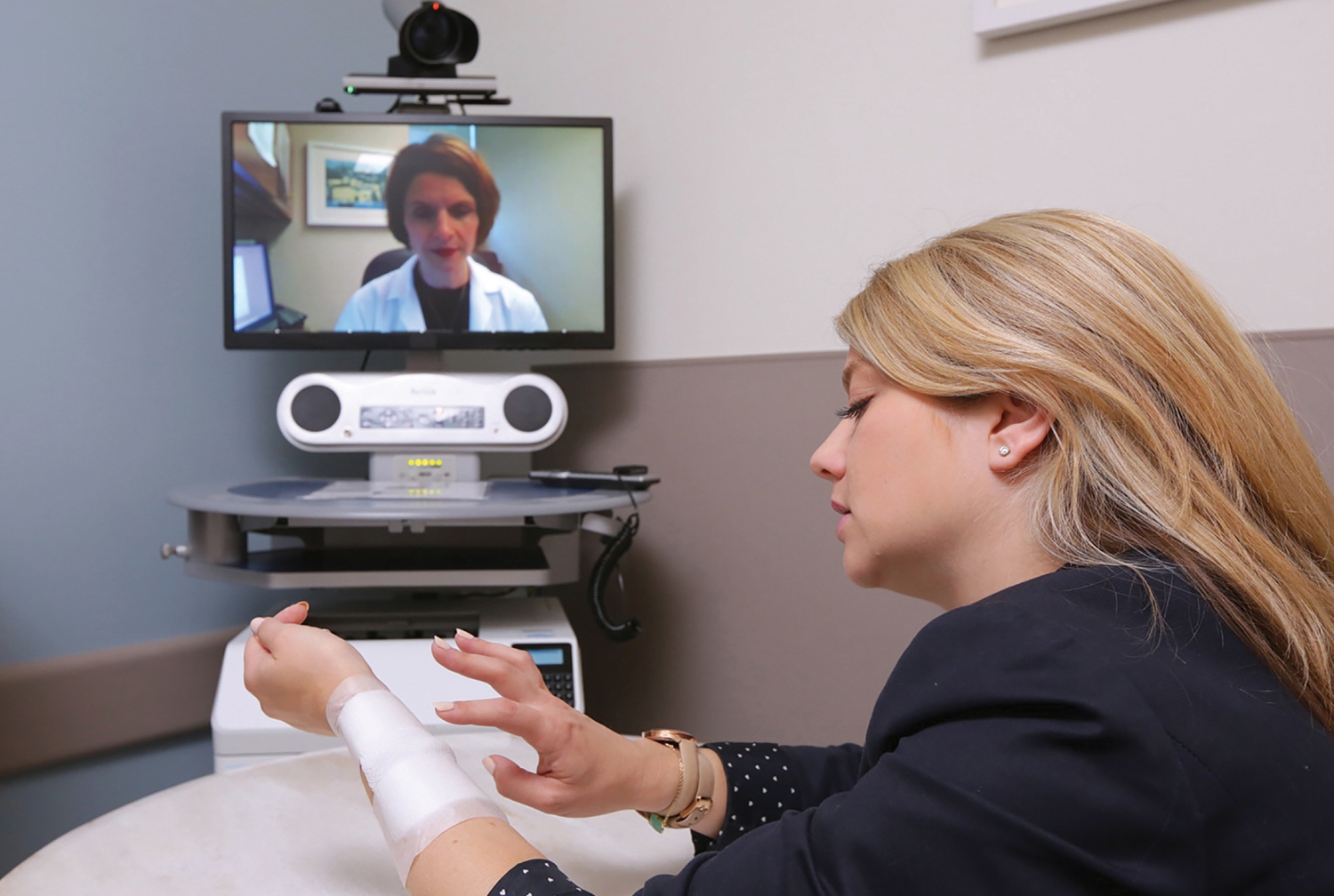 Bronx resident Andrea Ablack and her family are longtime patients of NewYork-Presbyterian/Weill Cornell Medical Center. Not only do they come to the hospital for routine care, but she was born there—as were her four sisters—and she gave birth to her own daughter there four years ago. So when the 28-year-old childcare worker stopped by the emergency department for treatment of some flu-like symptoms in early March, she thought she knew what to expect—including the fact that because her illness was relatively minor, she might have to wait a few hours to see a doctor.

But after checking in and seeing a physician assistant—who conducted a brief exam and noted Ablack’s symptoms, which included a sore throat, swollen lymph nodes, a headache and chills—she was given a surprising option: instead of waiting, she could be seen in a matter of minutes. The twist was that she wouldn’t be consulting with a physician in person, but rather by video conference. She agreed and was escorted to a private room, where she and a board-certified emergency medicine doctor—located in another building on campus—communicated over webcam. “It went well,” she recalls. “He knew everything that was going on with me before I got in the room, so all I had to do was explain how I was feeling. It was very detailed, very helpful.” Ablack was swiftly diagnosed with an upper respiratory infection and given a prescription for prednisone—she has asthma, and her illness had triggered some wheezing—as well as a recommendation for over-the-counter cough medicine. “At the end, the discharge papers were printed right there in front of me,” she marvels, “which I thought was very cool.”

Ablack is among the more than 5,000 patients who have used the ED’s new telemedicine system, NYP OnDemand Express Care, since it was launched in July 2016. Designed for patients with non-life-threatening conditions—colds, minor rashes, sprains and the like—the system has proved highly popular. According to Dr. Peter Greenwald, the ED’s co-director of emergency medicine telehealth services and director of emergency medicine telehealth quality assurance, more than 95 percent of patients who are offered the service opt for it. Last fall, Express Care was honored with the 2017 Emergency Care Innovation of the Year Award, presented at the American College of Emergency Physicians Scientific Assembly in Washington, D.C. “When we were first planning this, many people, myself included, were quite skeptical,” says Dr. Greenwald, an attending physician in the ED and an assistant professor of medicine at Weill Cornell Medicine. “But patients have been remarkably happy with these encounters. Satisfaction has been as good or better as with comparable patients in the emergency department.” And while planners originally assumed that Express Care would primarily appeal to a younger demographic, that hasn’t held true. “This has been readily embraced by patients over 60; we’ve had quite a few over 90—and two who were 99,” Dr. Greenwald says. “We’ve gotten comments like, ‘I can’t wait to tell my friends I did this.’ It’s been surprising.”

Dr. Rahul Sharma, emergency physician-in-chief at NewYork-Presbyterian/Weill Cornell Medical Center and chair of the Department of Emergency Medicine at Weill Cornell Medicine, likes to compare Express Care’s role in the ED to that of ATMs in the banking world. When the machines first appeared decades ago, he says, many people doubted their usefulness, since cash could be obtained from a teller. “But when was the last time you went to a teller to get cash?” asks Dr. Sharma, also an associate professor of clinical medicine and of clinical healthcare policy and research. “You go to the teller if you have a question or a problem with your account. We have the same approach in terms of the low-acuity patients in our emergency department. This is not for people with chest pains or stroke symptoms.” And fears that onscreen interactions would seem impersonal have proved unfounded. “It’s actually a more intimate encounter,” Dr. Sharma says. “You’re one on one with the patient, in a private room, and there are fewer interruptions.” Dr. Greenwald adds that although nothing can replace a hands-on exam, clinicians can learn a surprising amount through virtual means. “I’ve been practicing for almost 20 years, and it’s interesting to exercise a new set of muscles,” he says. “You’d think this would be purely talking, but the amount of information you can get visually is impressive. You can get a good skin exam, look in the back of someone’s throat, count their breathing. You can get people to examine their own wrist or ankle, press on their own belly, take their own heart rate.”

Drs. Greenwald, Sharma and colleagues are currently conducting research on Express Care, including studying how the system affects the length of time spent in the ED; exploring whether there are differences in antibiotic prescribing rates when patients are seen via telemedicine or in person; and comparing the experiences of younger versus older patients. All told, Dr. Sharma says, Weill Cornell Medicine faculty have published some twenty articles and abstracts on telemedicine topics over the past year and a half. In February, he co-authored an essay in JAMA with Dr. Michael Nochomovitz, assistant professor of clinical medicine (courtesy), coining a term for a potential new specialty: the “medical virtualist.” The essay noted that by 2022, telemedicine—which began as a way to reduce geographic barriers to healthcare in rural areas—is expected to grow into a $12.1 billion industry worldwide.

Given telemedicine’s increasing role in healthcare, Dr. Sharma stresses that it’s vital for future physicians to get specialized training. In fall 2017, the Medical College launched a two-week elective in telemedicine, one of the first of its kind in the country. Open to fourth-years as well as visiting students and interested residents, it includes sessions with standardized patients—professional actors trained to participate in simulated medical encounters—at the Margaret and Ian Smith Clinical Skills Center. “Telemedicine, and technology in general, is creating a new need for communication skills training in medical education,” says Dr. Yoon Kang, the center’s director and the Richard P. Cohen, MD, Associate Professor of Medical Education. “Given the growth of telemedicine in clinical practice, the national boards may also consider an assessment of students’ skills at using a technological platform for patient communication in the near future.”

At the Smith Clinical Skills Center, all physicians-in-training receive a checklist for patient encounters that includes calling people by name, avoiding leading questions and letting patients speak without interruption. Now, there’s a telemedicine version, which adds guidelines such as making sure that the background is uncluttered and professional-looking; staying in the camera frame; maintaining eye contact; and speaking loudly and clearly enough to be understood through the microphone. The two-week elective in telemedicine also includes guidance on techniques for optimal “webside” manner—so physicians can convey the same warmth and compassion over a video screen as they can in person. Says Dr. Sharma: “You can’t just put someone in front of a monitor and expect them to do a good job.”

Express Care is just one of several ways in which Weill Cornell Medicine and NewYork-Presbyterian/Weill Cornell Medical Center are harnessing technology to better serve patients—and in many cases, they don’t even need to come to the hospital. Using an online system, for example, patients can have a “virtual visit” with their physician or request a second opinion without leaving home. Through a collaboration with Walgreens, customers can see a doctor using kiosks in private rooms at several drugstores in New York City. And instead of going to an urgent care center, non-emergent patients can be seen by an emergency physician through an app or Web browser from 8 a.m. to midnight, seven days a week. The suite of services, some of which require out-of-pocket fees that may be reimbursable under individual insurance plans, is being offered under NewYork-Presbyterian’s umbrella program, NYP OnDemand; it also includes a system for specialists—in such fields as psychiatry, pediatrics and stroke medicine—to quickly consult with each other across the NewYork-Presbyterian system. “The most important take-home is that if patients didn’t like this, it wouldn’t have gone anywhere,” Dr. Sharma says. “They’re the ones who are really driving this.”

A version of this story first appeared in Weill Cornell Medicine, Summer 2018 issue.