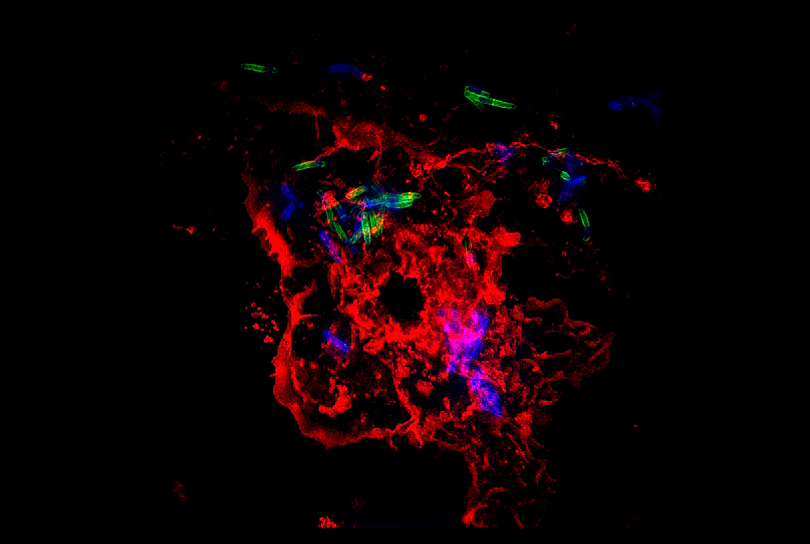 By sabotaging one of the tuberculosis bacterium’s defenses against antibiotics, Weill Cornell Medicine investigators may have found a way to accelerate treatment for the disease and possibly overcome growing resistance to existing therapies.

In a study published April 25 in Science Translational Medicine, Dr. Dirk Schnappinger and colleagues found a way to subvert the waxy coating surrounding Mycobacterium tuberculosis (Mtb), the bacterium that causes TB, making it easier for antibiotics to get inside and kill them.

The investigators, including those from a National Institute of Allergy and Infectious Disease Tuberculosis Research Unit – a six-institution multidisciplinary collaboration led by Weill Cornell Medicine – tested the strategy in culture with an experimental drug and in mice that were infected with genetically manipulated Mtb. The group found that the approach made a known TB drug more potent, potentially speeding up treatment.

It takes several months to treat TB with existing antibiotic combinations. Many patients quit taking the drugs too soon because they begin to feel better even though they are not yet cured or because they can’t obtain continuous treatment, said Dr. Schnappinger, an associate professor of microbiology and immunology at Weill Cornell Medicine.

“A patient who feels better can be tempted to stop treatment,” Dr. Schnappinger said. But stopping too soon contributes to the emergence of antibiotic-resistant strains of TB. In fact, strains of Mtb that are resistant to many or all existing TB drugs are a growing global threat.

In their study, the investigators first demonstrated that an experimental drug called Bio-AMS kills TB bacteria grown in lab conditions simulating human infection. Bio-AMS, an experimental drug developed by study co-author Dr. Courtney Aldrich, a professor at the University of Minnesota, works by binding to an enzyme called biotin protein ligase (BPL) and preventing the assembly of fats that make up the waxy envelope surrounding TB bacteria. This coating protects the bacteria, making it naturally resistant to several antibiotics.

Unfortunately, experiments in mice have shown that Bio-AMS breaks down so quickly in the body that it doesn’t kill the infection at tolerable doses. However, Dr. Schnappinger and his colleagues were able to turn off BPL by genetically engineering TB bacteria with a built-in off switch for the enzyme. They then tested existing TB drugs on mice with the genetically engineered TB bacteria.

The experiments showed that the antibiotic rifampicin is more potent against the bacteria when BPL was turned off, most likely because the waxy coating surrounding the TB bacteria becomes more porous when BPL is missing, which may allow more rifampicin to infiltrate and kill the bacteria.

“Targeting the BPL pathway has potential to shorten TB chemotherapy, because rifampicin becomes more potent and faster acting at the same dosage,” Dr. Schnappinger said. While such a drug is still a long way from clinical use, he said, the investigators are now working to develop a BPL inhibitor that lasts long enough in the body to be effective.