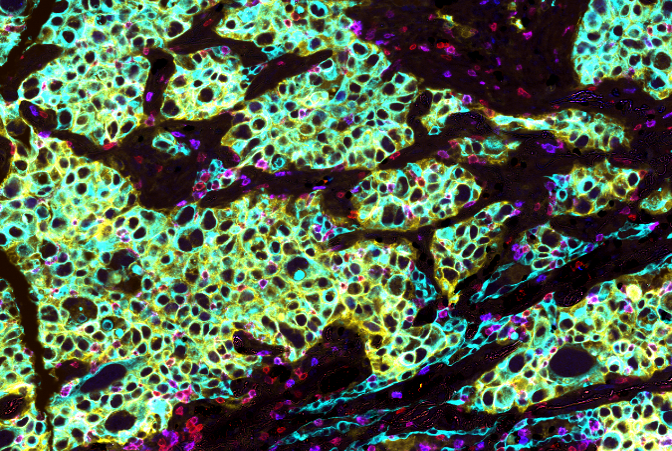 The study, published July 12 in JCI Insight, suggests that immunotherapy that blocks PD-1 – a protein that inhibits immune response to tumors – could be successfully incorporated into early-stage non-small cell lung cancer (NSCLC) treatment. Currently, the U.S. Food and Drug Administration has approved these drugs, called immune checkpoint inhibitors, only for late-stage NSCLC cases either alone or in combination with chemotherapy. Treatment is based on the proportion of tumor cells expressing PD-L1, a protein that together with PD1 triggers the deactivation of the immune response. By initiating this therapy earlier in the disease course, clinicians can take advantage of patients’ healthier immune systems before tumors progress or other treatments physically weaken patients.

“The standard of care for early-stage lung cancer is surgery, and removing a localized tumor has a therapeutic benefit. But 50 percent of patients relapse eventually,” said senior author Dr. Vivek Mittal, a professor of cell and developmental biology in cardiothoracic surgery, and director of the Neuberger Berman Foundation Lung Cancer Laboratory at Weill Cornell Medicine. “If we could do something in the early stages to generate an active immune response, we might be able to prevent recurrence in the future.”

NSCLC comprises about 80 percent of all lung cancers, with a five-year survival rate of only 15 to 20 percent. About 20 to 25 percent of the 220,000 people diagnosed with NSCLC in the United States each year present with early-stage disease.

Checkpoint inhibitor drugs are designed to release the immune system’s built-in brakes, known as checkpoints, which impede the immune system’s ability to attack cancer cells. “Integrating these drugs into the treatment of patients with early-stage lung cancer, preferably before surgery, can result in a powerful immune response that may persist even after the tumor is surgically removed,” said co-senior author Dr. Nasser Altorki, chief of the Division of Thoracic Surgery at Weill Cornell Medicine and NewYork-Presbyterian/Weill Cornell Medical Center and the Gerald J. Ford-Wayne Isom Research Professor in Cardiothoracic Surgery at Weill Cornell Medicine. “This will hopefully reduce or prevent the chance of future recurrence of the cancer after surgery.”

The study aimed at testing the utility of these drugs in early-stage NSCLC was completed in two parts. First, Dr. Mittal and his colleagues evaluated molecular components of the immune system in early-stage NSCLC by comparing tumor and healthy lung tissue samples taken from 20 NSCLC patients treated at Weill Cornell Medicine. All of the patients had been diagnosed with stages 1 through 3A of the disease – considered early-stage cases – and hadn’t yet undergone non-surgical treatment. The team found that tumor tissues contained large numbers of cancer-killing immune cells, called T cells, indicating an anti-tumor immune response. However, that immune response was rendered ineffective when the checkpoint proteins, PD1 on the T cells and PD-L1 on the tumor cells, interacted. This indicated immune suppression in patients – even at this early stage of cancer development.

The team found that immune cells called CD4 T cells, which coordinate the immune response by signaling other T cells to collectively fight invaders, grew in number and activity with checkpoint inhibitor treatment. They discovered that treatment also increased the number of CD8 T cells, which directly kill tumor cells. They further showed that loss of both populations led to a diminished response to the drug and enhanced tumor progression. Their data demonstrated that these checkpoint inhibitors are affecting not only the CD8 T cells that do the killing but also the CD4 T cells that coordinate the response, and more importantly, they work together, which has yet to be appreciated.

Few other scientists nationwide are examining the role of checkpoint inhibitors in early-stage NSCLC, Dr. Mittal said, and clinical trials in humans are already underway at Weill Cornell Medicine.

“For early-stage lung cancer patients, there’s a lot of excitement to begin to look into the effectiveness of immune checkpoint inhibitors,” he said. “We need to refine the use immunotherapies, preferably in combination with other therapies to hopefully stop the cancer from coming back.”