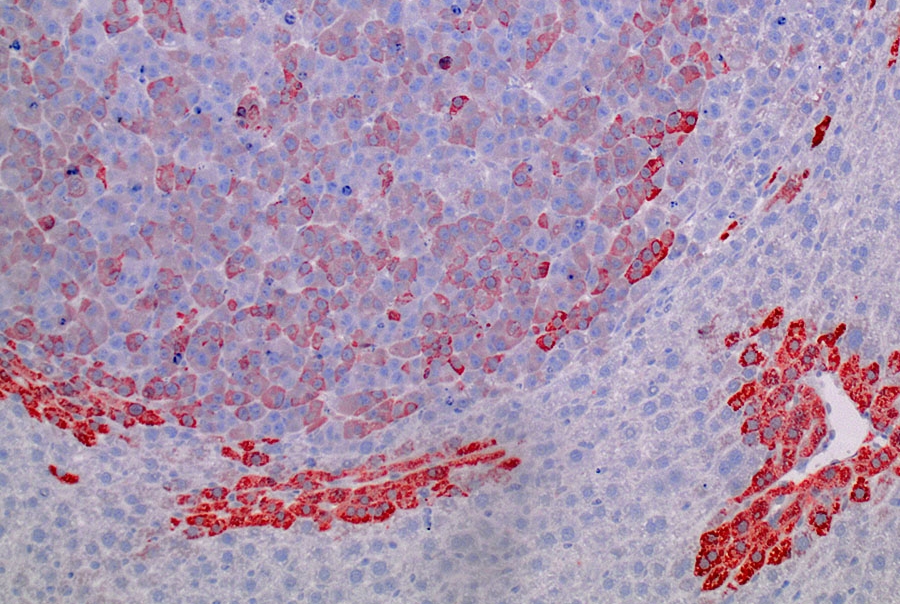 Image shows a common form of liver cancer, called hepatocellular carcinoma, produced in mice following the introduction of a tumor-causing mutation in the beta-catenin gene by CRISPR base editing. The staining shows expression of a gene (Glutamine Synthetase) that is activated by mutant beta-catenin in tumors.

New molecules engineered by Weill Cornell Medicine researchers can enable rapid, direct “editing” of genes in a wide range of cell types, creating an array of research and therapeutic possibilities.

The molecules, known as base editors, can attach to a target DNA sequence and chemically alter a single nucleobase or DNA letter. Base editing is widely seen as having great potential as a scientific tool and a strategy for curing genetic diseases, but first-generation base editor molecules have not worked efficiently in many mammalian cell types and were even more challenging in animal model systems. The new base editors, described in a paper published July 3 in Nature Biotechnology, largely overcome these drawbacks, paving the way for a much broader and more ambitious use of the technology ranging from bench to clinic.

“These new base editors allow us to model and study diseases such as cancer in new ways, but they really have applications all the way across biomedical research,” said senior study author Dr. Lukas Dow, an assistant professor of biochemistry in medicine and a member of the Sandra and Edward Meyer Cancer Center at Weill Cornell Medicine, and a paid advisory board member for Mirimus, Inc., a company focused in genome editing technologies to develop animal models.

Base editing technology, just two years old, derives from the better known CRISPR/Cas9 genome-editing technology. CRISPR/Cas9 molecules allow scientists to cut almost any piece of DNA in a cell and thereby disable or remove a gene. By contrast, a base editor molecule, using essentially the same DNA-targeting mechanism, chemically modifies a gene rather than cutting it out.

Base editing is better suited for making or correcting single-base “point mutations” in DNA—the cause of many inherited diseases and cancers—and in principle involves less risk of causing collateral DNA damage. However, first-generation base editors operate efficiently in relatively few cell types. “In many cell systems, we and other scientists have struggled to make them work,” said Dr. Maria Paz Zafra, a postdoctoral fellow at Weill Cornell Medicine and lead author of the study.

Together, the team systematically re-engineered the principal existing set of base editors, known as BE3, BE4Gam and xBE3, to boost their production in cells—low production had been a problem in many cell types. The scientists also improved the editor proteins’ ability to home in on the DNA-containing nucleus of cells.

Dr. Dow and his colleagues showed that the optimized editors, unlike their first generation counterparts, work efficiently in a wide variety of cell types and model systems, including mouse and human cell lines, “organoid” assemblages of cells that mimic the intestine, and even liver cells in live mice.

The Weill Cornell Medicine scientists now plan to use the new editors for several research applications, including the investigation of mutations associated with cancers to find suitable targets for therapies. “There is a huge list of cancer-linked mutations whose precise roles in cancer are unknown, and now with these optimized tools we can study them affordably and in a feasible time frame,” Dr. Dow said.

The optimized editors are also being disseminated to researchers working on other applications, including potential therapies for genetic diseases.