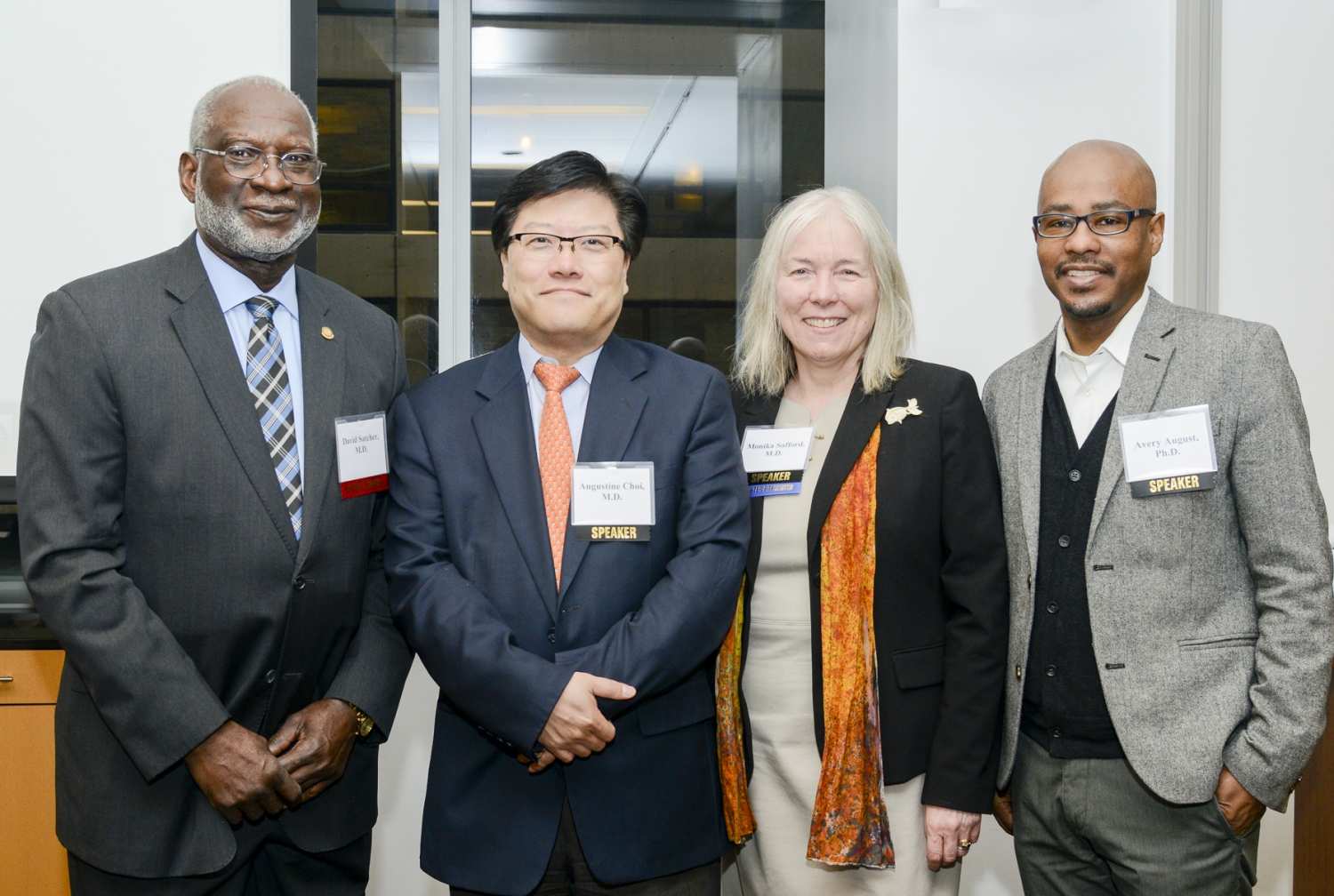 Researchers at Weill Cornell Medicine and Cornell's Ithaca campus have established a new center to better understand why health outcomes vary among demographic groups. Through partnerships with communities in New York City and central New York, the Cornell Center for Health Equity will generate new evidence on how to eliminate such differences with the goal of achieving health equity for people locally, regionally and nationally.

Working with local organizations and providers, the center will study the causes of health disparities—which include unequal healthcare access and quality, as well as social influences—among minority communities. Investigators will use their findings to develop new interventions that can surmount adverse health outcomes caused by that imbalance. They will also train the next generation of researchers who can tackle this critical public health issue. A symposium on March 15 and 16 at Weill Cornell Medicine officially launched the center.

“The Cornell Center for Health Equity is a perfect reflection of our land-grant mission to develop and disseminate knowledge for the public good,” said President Martha E. Pollack. “It also aligns with our focus on leveraging the strengths of our upstate and downstate campuses through collaborations that yield high-impact research, educational opportunities and benefits for local, national and global communities.”

“As physicians, it is our responsibility to ensure that everyone – regardless of where they live, their backgrounds and economic status – has access to quality healthcare so that they can live full, productive and healthy lives,” said Dr. Augustine M.K. Choi, the Stephen and Suzanne Weiss Dean of Weill Cornell Medicine and provost for medical affairs of Cornell University. “The Cornell Center for Health Equity is an important step in ending healthcare disparities that affect the most vulnerable among us.”

“Despite extraordinary medical advances in recent decades, what medicine has not done is close the gap in giving care to underrepresented communities, so the disparities continue,” said Dr. Monika Safford, co-director of the Cornell Center for Health Equity and chief of general internal medicine at Weill Cornell Medicine. “We want to drill down on this issue, so we are partnering with communities to understand their priorities and perspectives, collaboratively developing interventions based on science as well as community realities, and partnering with community organizations to sustain those interventions.”

The center’s work will focus on health disparities in New York City and in upstate New York, and will equip undergraduate students on the Ithaca campus, including underrepresented minority students and those from backgrounds who are underrepresented in medicine, with tools to conduct research on health equity. Dr. Avery August, co-director of the center and an immunologist based in Ithaca, will serve as a critical role model for minority students and researchers.

“The recent generation of students is more socially aware, so they recognize the inequities, and one of the advantages we have is that they’re excited to work to address those inequities,” said Dr. August, who is also vice provost for academic affairs at Cornell. “The center is a great opportunity and vehicle to focus those energies on the issue of health equity.”

The center will address disparities in heart disease, stroke and cancer outcomes in disadvantaged minority communities in the diverse, urban New York City area, as well as in more rural regions of New York state. Working with organizations and providers deeply engaged in their communities, including caregivers and local health centers, the investigators will analyze the role of policy, societal biases, socioeconomic status, educational attainment, healthcare providers, and the home and family environment in overcoming these disparate health outcomes.

For one of its projects, the center is engaging with Afro-Caribbean communities that increasingly use NewYork-Presbyterian Brooklyn Methodist Hospital. Using data showing higher prevalence of hypertension among populations of African descent, center investigators are working with colleagues at NewYork-Presbyterian Brooklyn Methodist to plan events that encourage residents to be screened and receive treatment for hypertension. They hope that these activities will also motivate residents to be screened for common cancers – including breast, colon and prostate cancers – that are also of higher prevalence in African-descent communities.

Along with that work, the center hopes to use data collected by Dr. Margaret McNairy, the Bonnie Johnson Sacerdote Clinical Scholar in Women’s Health and an assistant professor of medicine at Weill Cornell Medicine, on the prevalence of emerging cardiovascular diseases in Haiti. Her work may become useful in identifying and promoting treatment of cardiovascular diseases in Haitian communities in New York City, Dr. Safford said.

In another project at the center, Dr. Laura Pinheiro, an assistant professor of health services research in medicine at Weill Cornell Medicine, is facilitating a mammography screening program for women in underrepresented communities, including Spanish-speaking patients. With the help of an electronic medical records team and in collaboration with the New York State Department of Health, Dr. Pinheiro identified locations where residents lived below the federal poverty line and, working alongside a bilingual patient navigator, conducted outreach. Since starting the program in July, the team has screened hundreds of women.

In Ithaca, Dr. Rebecca Seguin-Fowler, an associate professor of nutritional sciences in the Colleges of Human Ecology and of Agriculture and Life Sciences, is seeking to reduce heart disease risk factors among women in the central, upstate and Finger Lakes regions of the New York. In one project, called Strong Hearts, Healthy Communities, Dr. Seguin-Fowler is collaborating with Cornell Cooperative Extension educators and the Bassett Healthcare Network’s Center for Rural Community Health to implement and evaluate a six-month cardiovascular disease risk-reduction program for overweight or obese women who are sedentary. The first phase of this community-randomized trial demonstrated effectiveness in reducing multiple disease risk factors, including weight loss and improved physical activity.

As the initiative grows, students in New York City and Ithaca will conduct research and work with fellow scientists and staff members across the two campuses. This aligns with one of Cornell’s strategic priorities, which emphasizes a connection between the medical school and other parts of the university through a distinct focus, in this case improving health equity.

Looking forward, officials hope the Cornell Center for Health Equity can follow the lead of similar initiatives at Johns Hopkins University and the University of Alabama at Birmingham and cultivate a strong regional presence, working with communities across Cornell’s sphere of influence in New York City and New York state.

“Cornell has such a broad reach,” Dr. Safford said. “While we’re at the very beginning stages of our center, tapping into that Cornell community and potentially making an impact regionally is really exciting.”