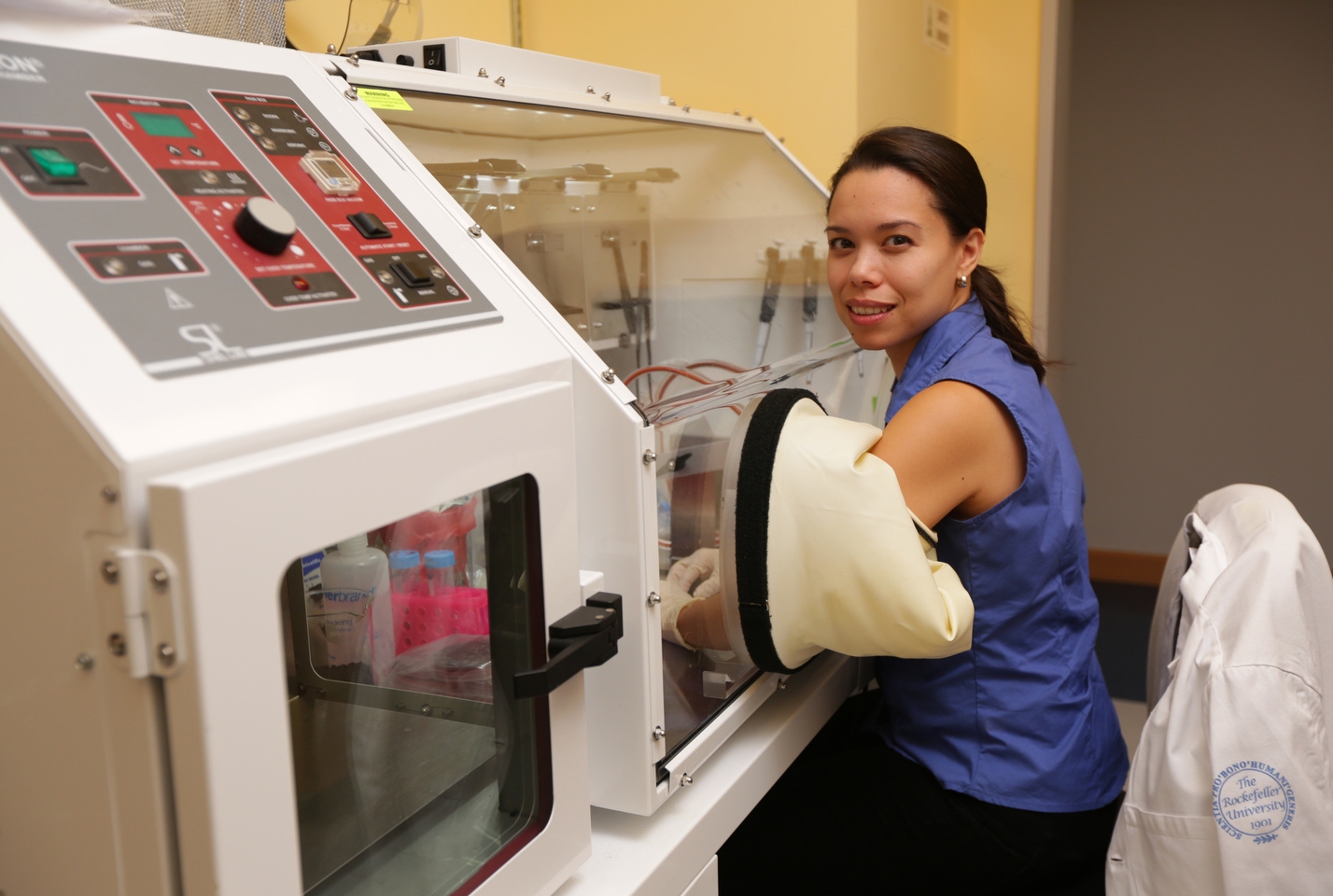 Some students enter the Weill Cornell Graduate School of Medical Sciences straight from undergrad; others spend a few years working in a lab before applying to master’s or doctoral programs. But it’s safe to say that few, if any, have taken the same route as Dr. Virginia Pedicord—a path traced by dramatic, rhythmic steps set to music.

Before matriculating at the graduate school, Dr. Pedicord was a professional dancer in New York City, primarily performing with two contemporary dance companies. During her PhD studies in immunology and microbial pathogenesis, she set her creative pursuits aside—but over the past five years, while doing a postdoc at The Rockefeller University, she has managed to balance art and science by taking regular dance classes and performing in occasional shows. “Having a creative outlet and being able to step away from the lab really reinvigorates you,” she says. “When you’re able to think in a different way for a couple of hours, you can come back to the question or problem with a bit of a different perspective.”

Dr. Pedicord’s holistic view has been more than vindicated: in early 2018, she moved to the United Kingdom to start her own lab at the University of Cambridge, supported by a five-year grant of about $1.6 million from the Wellcome Trust. There, she’ll continue her research on the mechanisms by which the everyday bacteria residing in the human gut help protect against dangerous intestinal pathogens such as Salmonella and Clostridium difficile. She’ll also continue dancing, taking classes in Cambridge and London. “There are people who are more the stereotypical performing artist—those who love to be onstage and are very ethereal, emotional and expressive,” Dr. Pedicord observes. “At some level I’m those things too, but I have another side that really wants rational thinking, factual information and empirical evidence.”

A Texas native, Dr. Pedicord came to dance relatively late in life. Although she was always interested in it—“I would dance around the living room when I was a kid, even though I didn’t know what I was doing”—her family couldn’t afford lessons. But after performing in a production of “Oklahoma!” her junior year of high school, the dance bug bit her hard, and she funded her own ballet and jazz classes with money earned by babysitting. As an undergrad at Minnesota’s Carleton College, Dr. Pedicord studied both biology and contemporary dance with equal fervor. “College is a time when you don’t have to choose,” she says, “which is fantastic.” Faced with the choice of which to pursue after her graduation in 1999, Dr. Pedicord opted for the artistic route. “Carleton is intense and academically rigorous, so I was happy to take a bit of a break from science,” she explains. “And I knew that if I wanted to explore how far I could go as a dancer, my body wouldn’t let me do it later in life. It wasn’t even a struggle, because the decision seemed clear.”

Dr. Pedicord danced professionally for five years, supplementing her income by bartending and teaching exercise classes. Among her higher-profile performances was a playful 2003 piece entitled “Gophoria,” in which she was one of a quintet of women channeling frolicsome woodland animals; a New York Times critic praised the piece, part of a show of one choreographer’s work at a theater in Manhattan’s Morningside Heights neighborhood, as “a syncopated, uninhibited romp danced with infectious comic abandon.” Eventually, though, the lure of the lab was too strong. “I missed it a lot, and there’s only so much you can get out of reading pop science articles,” she says. “I missed having a question to investigate and answer. So as time went on, I realized that although I loved dancing, I didn’t feel a strong need to do it as my career, and I felt drawn to come back and do my PhD.”

Her next step, of course, was to apply to programs—but Dr. Pedicord found that at most institutions, her time away from academia was regarded as a strike against her. At Weill Cornell Medicine, though, her interviewers had the opposite reaction. “When people have a breadth of experience in areas outside medicine or science, that often indicates a broad view that’s conducive to creativity and to having new ideas,” says one of those interviewers, Dr. Carl Nathan, the R.A. Rees Pritchett Professor of Microbiology and chair of microbiology and immunology, who was appointed graduate school dean last year. “And young people who are multitalented often have trouble deciding which avenue to pursue; they try one and then choose another. So I didn’t regard her sojourn in dance as a negative. Given how well she had done academically and how good her recommendation letters were, I actually saw it as a positive.”

During her doctoral studies in the lab of Dr. James Allison (who has since left Weill Cornell Medicine to become chair of immunology at the University of Texas’s MD Anderson Cancer Center), Dr. Pedicord didn’t pursue dance at all. In retrospect, she says, that was a mistake—both for herself and for her work. “Partially because I had been out for five years, I felt a lot of pressure to catch up, get back up to speed and be really productive, so I just worked in the lab all the time,” she says. “I told myself that I didn’t have time to dance and that I couldn’t lose focus. But I really did miss it.”

Dr. Pedicord resolved to carve out a more balanced lifestyle as a postdoc. During the nearly five years she spent splitting her time between two labs at Rockefeller, she took dance class about twice a week and performed with Alvin Ailey Extension, the prestigious troupe’s educational arm. “In many ways, New York is the perfect place to do both science and dance, because the city offers so many of those opportunities,” she says, then adds with a laugh: “But I’m 40 and I haven’t danced professionally for a long time—so my leg definitely doesn’t go where it used to.”

This story first appeared in Weill Cornell Medicine, Vol. 17. No. 1