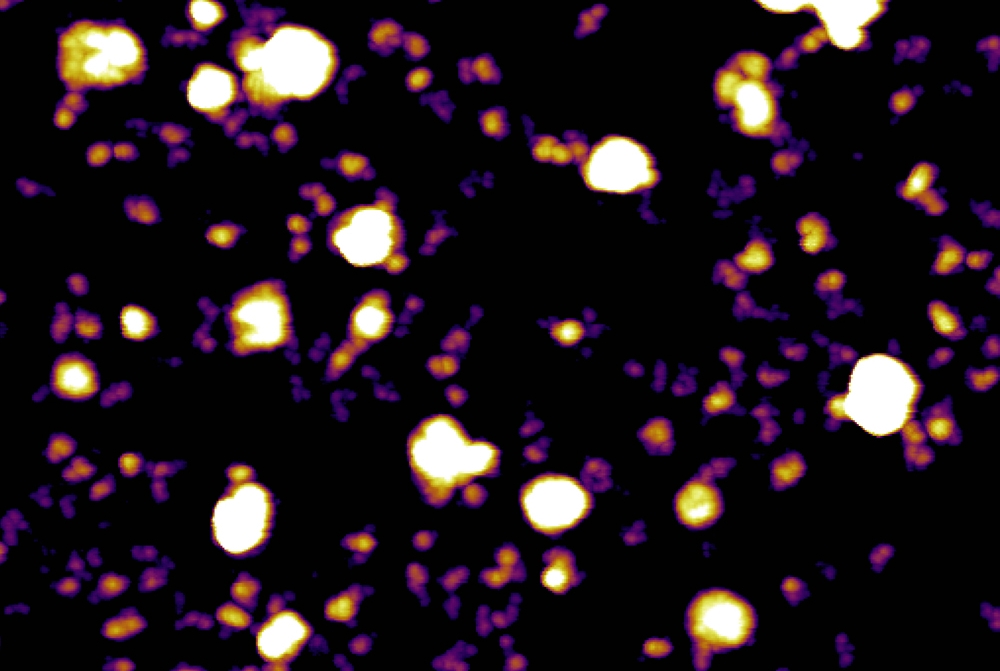 A new cellular messenger discovered by Weill Cornell Medicine scientists may help reveal how cancer cells co-opt the body’s intercellular delivery service to spread to new locations in the body.

In a paper  published Feb. 19 in Nature Cell Biology, the scientists show that a cutting-edge technique called asymmetric flow field-flow fractionation (AF4) can efficiently sort nano-sized particles, called exosomes, that are secreted by cancer cells and contain DNA, RNA, fats and proteins. This technology allowed the investigators to separate two distinct exosome subtypes and discover a new nanoparticle, which they named exomeres.

“We found that exomeres are the most predominant particle secreted by cancer cells,” said senior author Dr. David Lyden, the Stavros S. Niarchos Professor in Pediatric Cardiology, and a scientist in the Sandra and Edward Meyer Cancer Center and the Gale and Ira Drukier Institute for Children’s Health at Weill Cornell Medicine. “They are smaller and structurally and functionally distinct from exosomes. Exomeres largely fuse with cells in the bone marrow and liver, where they can alter immune function and metabolism of drugs. The latter finding may explain why many cancer patients are unable to tolerate even small doses of chemotherapy due to toxicity.”

Exomeres clock in at less than 50 nanometers in diameter, compared with small exosomes (Exo-S), which range from 60 to 80 nanometers in diameter, and large exosomes (Exo-L), which are 90 to 120 nanometers in diameter. “Exosomes and exomeres also have different biophysical characteristics, such as stiffness and electric charge, that likely affect their behavior in the body,” said lead author Dr. Haiying Zhang, an assistant professor of cell and developmental biology in pediatrics at Weill Cornell Medicine. “The more rigid the particle, the easier it is likely taken up by cells, rendering exomeres, which are stiffer than exosomes, the more effective messengers of transferring tumor information to recipient cells.”

Exosomes and exomeres also differ in the way they influence cancer. Exomeres carry metabolic enzymes to the liver, an organ that is central to the breakdown of drugs into nontoxic forms. The finding suggests that exomeres target the liver to “reprogram” its metabolic function to favor tumor progression. Exomeres also carry blood-clotting factors to the liver, where they may prohibit the liver's normal function in regulating clotting. By contrast, the study suggests that Exo-L may promote metastasis to lymph nodes, while Exo-S may support distant metastasis.

“Cancer is truly a systemic disease that requires multi-organ involvement to progress,” Dr. Lyden emphasized. “Our finding that tumor cells secrete these three distinct nanoparticles, that then target cells in different organs reflects this important aspect of the disease.”

Cornell University has filed a patent application on the technology that is described in the Nature Cell Biology paper. Researchers will now study how these different types of messengers develop, exactly what molecules each of them carry, and what their functions are at their target organ sites. “Understanding these characteristics may help scientists better understand how exomeres and exosomes help cancers grow and spread to other organs, as well as what role they may play in other diseases,” Dr. Zhang said.

Exosomes and exomeres are also detectable in bodily fluids such as lymphatic fluid, which might allow development of biomarkers for early detection of cancer or other pathological conditions. “Based on our findings, the next phase will be to measure exosomes and exomeres in plasma samples to help predict organs that may be targeted for metastasis during tumor progression,” said Dr. Lyden. “This will help us better understand the biology of cancer, guide therapeutic decisions and develop novel therapies.”

“Lastly, the technique we have pioneered will likely be a valuable tool for scientists and clinicians studying the biology of complex nanoparticle populations,” Dr. Zhang said, “and may aid in the development of diagnostic tests using them as biomarkers.”