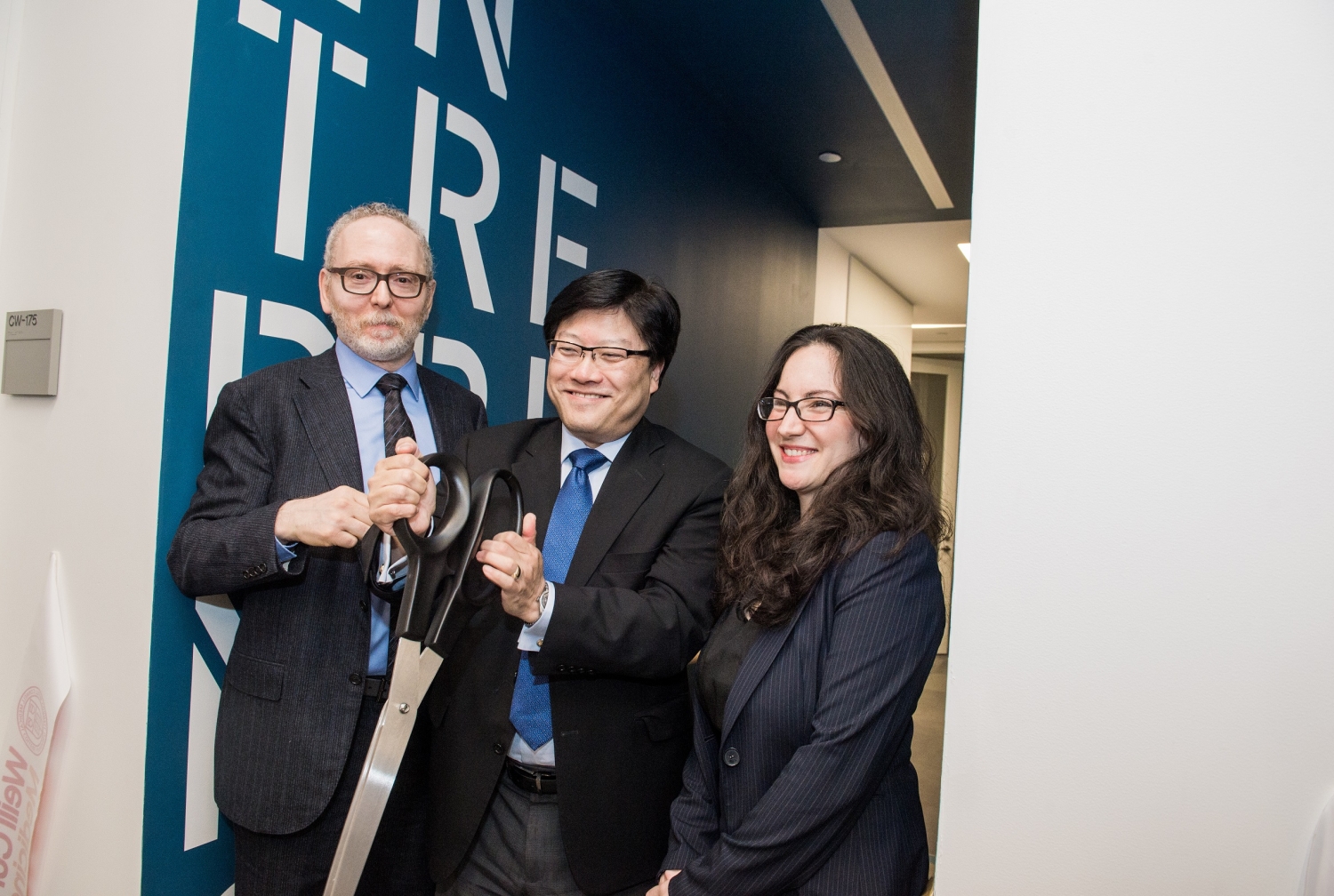 As second year medical students, Nathan Liu and David Westfall had a recurring problem when they studied together: how to describe what they were seeing on X-rays and other images if they weren’t working side-by-side.

To prevent any miscommunication, they used editing tools to add text to their images before sharing them, but quickly realized they needed a simpler and easier to use solution. Soon after, they developed Pixorize, a browser-based online platform that allows users to annotate and share images within minutes.

While they saw a larger market for this technology, they didn’t know how to expand their business or launch a company. That is, until they stumbled upon Weill Cornell Medicine’s BioVenture eLab, a hub of the institution’s entrepreneurial activity that celebrated a milestone on Jan. 23: the official launch of its new name and the opening of its dedicated space at 1157 York Ave. Excited by the resources the eLab offers, Liu and Westfall signed up this fall for its flagship 12-week intensive entrepreneurship crash course, called the Bench-to-Bedside Initiative, a program created and run by Dr. Sarah Kishinevsky, director of the BioVenture eLab.

“Having the opportunity to refine our product each week and receive feedback from people who work in the startup world was really helpful,” said Chenura Jayewickreme, a fourth-year doctoral candidate who joined the Pixorize team in September. “The product grew immensely over those three months.”

Thanks to the eLab, Westfall said, the company he and Liu co-founded is now incorporated, and the team is looking for seed funding. “We’ve now taken steps to turn this idea into a legitimate business.”

A growing demand for space and services

The Bench-to-Bedside Initiative, or BBI, which helps students and faculty translate promising ideas for biomedical devices, diagnostics, therapeutics or software to the commercial world, is one of several programs that the BioVenture eLab offers. There are also workshops in electronics and computational biology; 3D printer training; regular networking events; and the Biomedical Business Plan Challenge, which offers $100,000 in funding plus $35,000 in legal prizes from Wilson Sonsini to the team that writes the most compelling business plan and grant proposal for its product.

“All of our programs are meant to educate or provide resources, with the hope that some of these early-stage companies become real businesses,” said Dr. Kishinevsky, who works with inventors and startup teams, and runs and creates programs for the BioVenture eLab. The eLab was launched and is overseen by the Office of BioPharma Alliances and Research Collaborations, led by Managing Director Larry Schlossman.

Because students and faculty are increasingly interested in entrepreneurship, the eLab has expanded since its March 2016 launch. That growth is most clearly reflected in its new space at 1157 York Ave., where there are three offices, a bullpen, a shared conference room and kitchen, and a makerspace—perfect for prototyping ideas using electronics and the 3D printer, Dr. Kishinevsky said.

The Weill Cornell community celebrated the space on Jan. 23 with a ribbon-cutting ceremony. The next day, the eLab held their second annual Startup Symposium, which included six presentations, and a poster and networking session showcasing 27 early-stage technologies and startups in the biomedical and healthcare space.

“This was a great opportunity for inventors, entrepreneurs, investors and industry collaborators to connect with each other,” Dr. Kishinevsky said, noting that the eLab offers other networking events throughout the year, as well as ongoing mentorship arrangements.

A path to success

So far, the BioVenture eLab’s approach of offering both educational and mentorship opportunities has paid off.

At least five companies have been launched since the opening of the eLab last year; at least three teams from the 2017 BBI class are incorporated. Additionally, at least two other companies—iDu Optics LLC and OneThree Biotech—have launched because of the Biomedical Business Plan Challenge. Last year’s prize winner Du Cheng, an MD-PhD candidate in the Tri-Institutional MD-PhD Program between Weill Cornell Medicine, Memorial Sloan Kettering Cancer Center and The Rockefeller University and owner of iDu Optics who also won BBI in 2016, has been particularly successful. He now sells his iDu LabCam microscope adapter on Amazon and Shopify, and shares his newfound expertise during 3D printer training in the eLab’s new makerspace.

But even when BBI and Business Plan Challenge winners don’t immediately form a company—not because they don’t have the drive, but because the science isn’t ready for prime time yet—the entrepreneurship ecosystem that the BioVenture eLab promotes is still having a positive effect on the institution, Dr. Kishinevsky said.

Case in point: Drs. Edouard Mullarky and Ana Patricia da Silva Gomes, post-doctoral associates on the BBI-winning Ikaria Therapeutics team in December, who said that the training and mentorship offered by the eLab has helped them understand the business side of science much more than they did before. They think their team will be ready to approach the commercial world for funding in a year or two.

“I had basic ideas about some of the things the class touched on,” said Dr. Mullarky, “but now I have a more complete and nuanced picture of how to start a company.” Dr. Mullarky works in the lab of Dr. Lewis Cantley, the Meyer Director of the Sandra and Edward Meyer Cancer Center, who himself is an entrepreneur as the scientific co-founder of several companies, including Agios, a publicly traded company for which he also serves on its board of directors, and Petra Therapeutics, a new company started by Weill Cornell Medicine that raised a $48 million Series A financing upon closing the deal with the institution.

Dr. Mullarky also said he has a better understanding of how to communicate about complicated scientific topics to investors in a short amount of time—vital to capturing an audience’s attention and getting private funding.

This is exactly the point of the eLab, Dr. Kishinevsky said. “Our goal is to set up members of the Weill Cornell Medicine community for success,” she said, “and to build the next generation of leaders in the life sciences, who have the tools to launch new ventures that might have a positive impact in biomedicine.”