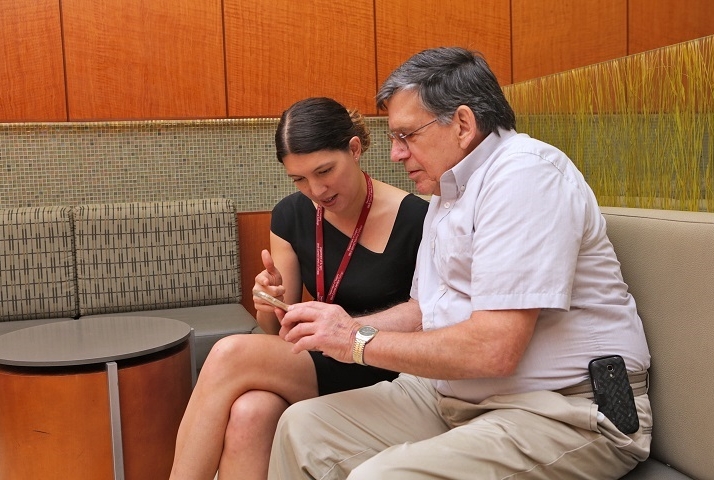 Following major surgery, the aftercare instructions that patients need to follow can be complex. They must remember to stay hydrated, take their medications and change their bandages, among other requirements. If they don’t follow these guidelines closely they risk serious complications prompting hospital readmission—which, unfortunately, is relatively common. “Monitoring patients’ recovery period is critical,” says Dr. Heather Yeo, the Nanette Laitman Clinical Scholar in Healthcare Policy and Research/Clinical Evaluation, an assistant professor of surgery at Weill Cornell Medicine and a surgical oncologist at NewYork-Presbyterian/Weill Cornell Medical Center specializing in colon and rectal surgery. “We have been able to do so successfully inside the hospital, but traditionally, it’s been harder and more resource-intense to keep track of patients when they go home.”

Dr. Yeo wanted to change that. So she worked with Cornell Tech to develop an iPhone app, dubbed mHEALS (for mobile app Helping Engage Adults after Surgery), that allows patients to input information about their health and habits, then sends it to doctors; it also generates reminders to help patients stick to their aftercare regimens. Well aware of the need to protect patient privacy and security in the digital world, she tapped the expertise of Dr. Deborah Estrin—a professor of computer science at Cornell Tech and of healthcare policy and research at Weill Cornell Medicine who is a pioneer in mobile healthcare technology—who offered advice on available software frameworks that use state-of-the-art techniques and encrypt data while remaining user-friendly.

The app works like this: Just prior to surgery, doctors gather patients’ baseline fitness and health data for input into mHEALS. Afterward, when patients are recovering in their rooms, they’re trained on how to use it. Once they’re home, the app tracks fitness levels by counting patients’ daily steps and queries them with surveys meant to monitor everything from surgical incisions to water consumption to bowel habits. “It’s like having access to your physician throughout the day,” says Dr. Yeo. “If a patient’s survey responses are abnormal, the app will prompt them to call the hospital right away and sends a notification to their doctor.”

Dr. Yeo reports that the results of a pilot run—which comprised 32 colon surgery patients and was completed last December—are encouraging. Most of them were excited to use mHEALS, she says, and initial results suggest it helped prevent readmissions. “The app provided an impetus for me to focus on drinking water, walking and doing breathing exercises, and I was more cognizant of my progress,” says David Matthews, a 73-year-old retired home inspector living in Marlboro, New Jersey, who adds he was motivated to participate “because of the ability of the modern technology to communicate valuable information to my doctors continuously, in real-time, and with such ease.”

To further measure the app’s effectiveness, Dr. Yeo is currently enrolling several hundred NewYork-Presbyterian/Weill Cornell Medical Center surgery patients for a randomized control trial that will run for two to three years. Funded with a $450,000 grant from the Damon Runyon Cancer Foundation, it will focus on surgeries for gastrointestinal cancer, which can pose a comparatively high risk of postoperative complications and subsequent hospital readmissions—making appropriate aftercare especially vital. But Dr. Yeo notes that eventually, the app could be tailored to a variety of procedures and conditions. “This technology has enormous potential,” Dr. Yeo says. “I can imagine a future where all doctors are using a simple but effective mobile app to keep a close eye on their recovering patients outside the hospital.”