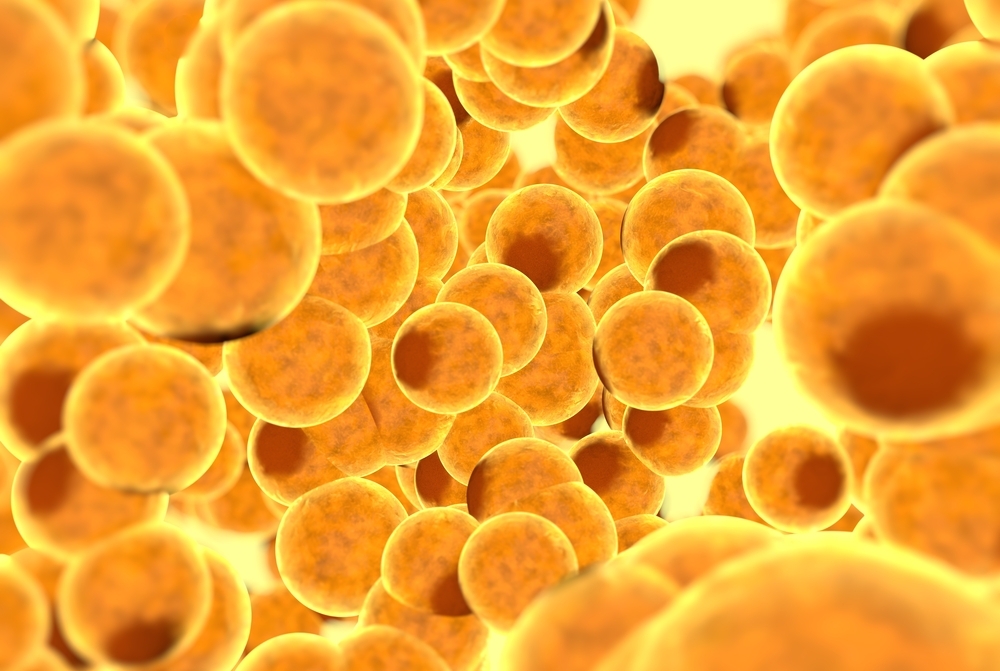 A signaling pathway in cells that regulates fat production could become a new target for cancer drugs, according to a finding by Weill Cornell Medicine researchers.

The discovery of the signaling pathway, reported Nov. 16 in Cell, represents a significant advance in understanding how cells regulate their growth in health and disease. The pathway involves signaling through a previously little-understood enzyme called SRPK2.

“This SRPK2 pathway is likely to be overactive in many cancers where reprogramming of metabolism to promote cell growth and survival is commonly observed,” said principal investigator and senior author Dr. John Blenis, the Anna Maria and Stephen Kellen Professor of Cancer Research at Weill Cornell Medicine. “It thus makes sense to start thinking about the development of SRPK2-specific drugs.”

The finding arose from Dr. Blenis’ longstanding research program on cell metabolism and, particularly, on a complex of proteins called mTORC1 that serves as a central metabolic processor in cells. The complex dials up the production of proteins, lipids and other biological molecules when nutrient and energy levels are sufficient. By contrast, when metabolic conditions are poor, mTORC1 becomes inactive and the production of proteins and other molecules drops. In healthy cells, mTORC1’s activity is in balance, but in 70 to 80 percent of cancers, it is boosted to excessive levels to permit runaway cancerous growth. There is evidence, too, that chronic excessive food intake can trigger diabetes in part by deregulating mTORC1 activity. Even aging has been linked to mTORC1 activity—inhibiting the complex has been found to extend lifespan in multiple animal species.

Dr. Blenis and colleagues published a 2011 study in Science revealing many of mTORC1’s likely downstream signaling partners. For the new study, he and his team, including postdoctoral researcher Dr. Gina Lee who conducted most of the experiments, followed up on one of those leads: SRPK2.

The scientists discovered that mTORC1 induces the activation of SRPK2 through one of the known mTORC1 signaling partners, S6K1. Once activated in a cell, SRPK2 moves into the cell nucleus, where its activity promotes the production of lipids—water-phobic molecules (including ordinary fats) that store energy, form building blocks for cellular structures, and have many other functions necessary for cellular activity and proliferation. 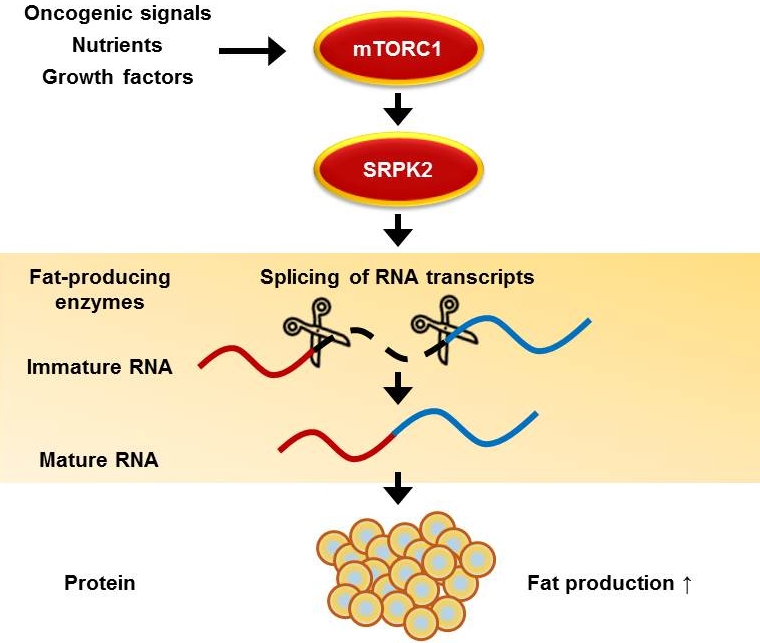 This schematic outlines the signaling pathway by which a protein complex, called mTORC1, abets cancer cell growth. mTORC1 induces the activation of the enzyme SRPK2. Once activated in a cell, SRPK2 moves into the cell nucleus and ensures that RNA is sliced and re-spliced to boost the expression of enzymes that make water-phobic molecules called lipids. These lipids store energy, form building blocks for cellular structures, and have many other functions necessary for cellular activity and proliferation. Image credit: Dr. Gina Lee

Drs. Lee and Blenis and their colleagues found that SRPK2 promotes lipid production by boosting the expression of lipid-making enzymes. However, it doesn’t do this in the expected way, by increasing the synthesis of these enzymes’ gene transcripts. Instead SRPK2 boosts the chance that the transcripts for these genes will be translated into the proteins they encode. The gene transcripts, which are made of RNA and called messenger RNAs (mRNAs), have to be sliced and re-spliced properly in order to be translated, and SRPK2’s activity permits that proper splicing.

“mTORC1-S6K1-SRPK2 signaling and its control over transcript splicing represents a major and entirely novel pathway for regulating lipid production in cells,” said Dr. Blenis, who is also a professor of pharmacology at Weill Cornell Medicine and a member of its Sandra and Edward Meyer Cancer Center.

The scientists found that chemically inhibiting the activity of SRPK2 or rendering its gene inactive in cultured cells sharply reduced the production of many lipids, including cholesterol. Blocking SRPK2 activity also markedly slowed the growth of various cancer cell lines, both in lab dish cultures and in tumors transplanted into mice.

Thus, he and his colleagues now are hoping to discover potent and selective SRPK2 inhibitors with the help of translational research organizations. The Weill Cornell Medicine scientists are also engineering mice that lack working copies of the SRPK2 gene to facilitate the study of this signaling enzyme’s role in healthy metabolism as well as in cancer, diabetes and obesity.