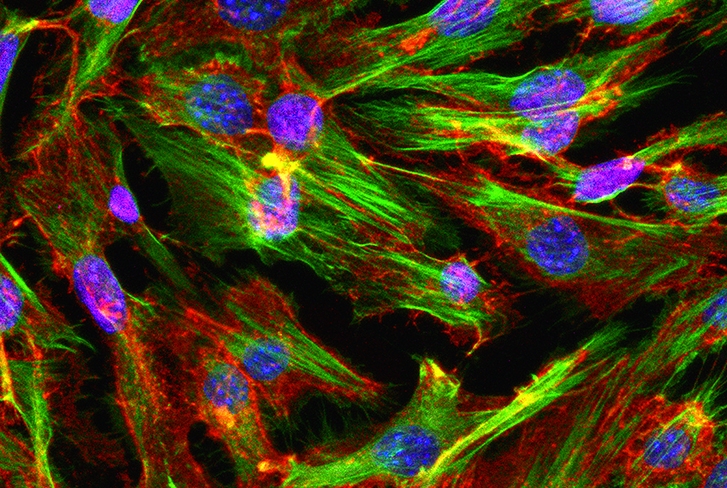 Blood stem cells, also known as hematopoietic stem cells (HSCs), are located within the bone marrow and give rise to all mature blood cells in the body throughout a person’s life. As people age, their HSCs age as well, leading to greater numbers of poorly-functioning blood cells, a decline in the ability to fight infections, and a predisposition to blood cancers like acute myeloid leukemia (AML), which is characterized by an excess of immature blood cells.

“Elderly people are more prone to cancers, especially AML,” said senior author Dr. Jason Butler, an assistant professor of regenerative medicine at Weill Cornell Medicine. “In addition, their aged blood stem cells make it hard for them to recover after cancer treatments like chemotherapy and radiation therapy that destroy blood cells. We’re trying to figure out how we can rejuvenate blood stem cells in order to help people recover faster from these treatment regimens.”

In a study published online on Oct. 16 and appearing in the November issue of The Journal of Clinical Investigation, Dr. Butler and his colleagues report that the age of blood vessel cells in the bone marrow strongly influences the function of blood stem cells. Additionally, they found a way to harness cells from young mouse blood vessels to rejuvenate old blood stem cells and restore their function.

The researchers isolated young and old blood vessel cells from the bone marrow – called bone marrow endothelial cells — and grew them in petri dishes with young or old HSCs. “We found that when we culture old HSCs with young endothelial cells, we can rejuvenate the mouse stem cells,” Dr. Butler said. When transplanted back into mice, these stem cells grew and functioned better and created healthy blood systems.

The investigators then transplanted young blood vessel endothelial cells into mice that had been given a strong dose of whole body radiation. They noted that the blood systems in the mice recovered quickly, indicating that the young endothelial cells boosted the function of the blood stem cells.

In another experiment, mice received radiation therapy, similar to what patients undergo prior to bone marrow transplant. Dr. Butler’s team then transplanted very low numbers of bone marrow cells into mice, some of which also received young endothelial cells. “We found that when we transplant endothelial cells with this limited number of bone marrow cells the mice survived and recovered faster,” said lead author Dr. Michael Poulos, an instructor of regenerative medicine at Weill Cornell Medicine. “This approach is appealing because endothelial cell infusions can potentially supplement a number of currently available bone marrow transplantation therapies to improve the overall clinical outcomes in both young and aged patients.”.

These observations lay a foundation for developing strategies to improve bone marrow transplants and blood cancer treatment regimens in an aging population. “It has broad applications for protecting the normal blood system from every cancer therapy that we have, because they are all detrimental to some extent,” Dr. Butler said. “If we can protect the normal system, we can make therapies more effective and lower the relapse rate for older patients."