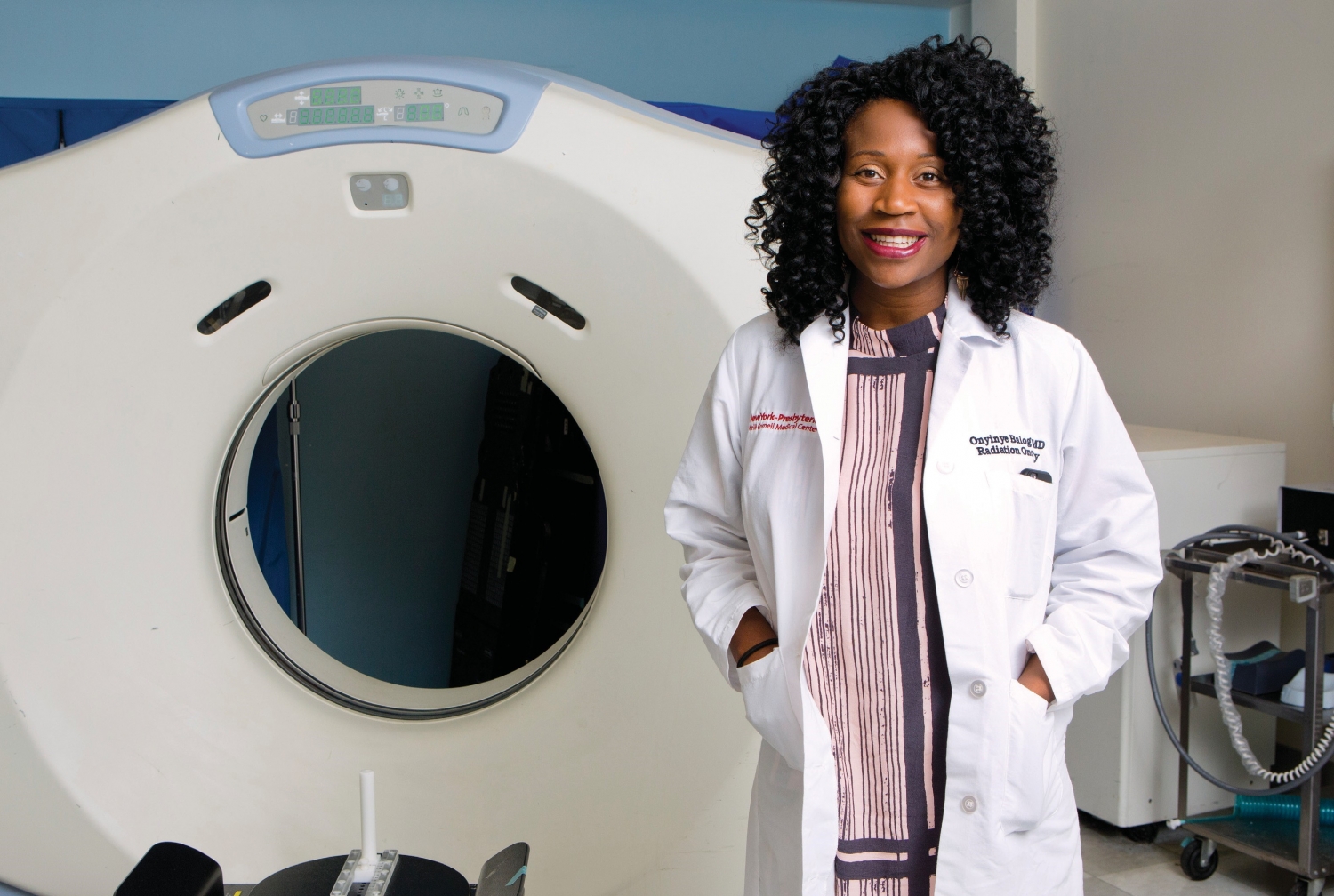 Dr. Onyinye Balogun with a CT machine in the Stitch Radiation Oncology Center at NewYork-Presbyterian/Weill Cornell Medical Center; she uses it to take images of cancer patients that will help shape their therapeutic plans. Photo credit: John Abbott

When Dr. Onyinye Balogun was a young girl, her father’s only sister was diagnosed with breast cancer back home in their native Nigeria. Dr. Balogun had recently immigrated to the United States with her parents, but on a return visit the severity of her aunt’s disease became clear. “She showed me her scars from the radiation treatment, and it left a big impact on me,” recalls Dr. Balogun, now an assistant professor of radiation oncology at Weill Cornell Medicine and a radiologist at NewYork-Presbyterian/Lower Manhattan. “Her skin was really dark, and she had some open wounds.”

Her aunt ultimately died of the disease, having only lived into her early 40s — and that loss sparked in the future physician a fierce desire to spare other patients the same fate. “I have a vendetta,” Dr. Balogun says. “Cancer took someone special away from me.”

In the quarter-century since Dr. Balogun’s aunt passed away, radiation technology has become safer and more precise, early diagnosis has become easier, and death rates for many cancers have fallen precipitously. But those gains have been largely confined to wealthy western countries, and in much of the world, cancer remains a death sentence. Dr. Balogun has long been haunted by the idea that patients like her aunt are dying when they might be saved by access to modern treatments — and when she arrived at Weill Cornell Medicine in 2015, she found herself in a position to help change that.

Today, through a partnership with the International Cancer Expert Corps (ICEC) — a Washington, D.C.-based nonprofit established in 2013 to improve cancer care in the developing world and in underserved communities in high-income nations — Dr. Balogun is creating a Weill Cornell Medicine hub of global outreach for cancer treatment. She has already visited the former Soviet Republic of Armenia, where she is implementing a curriculum to train medical staff at the National Center of Oncology. Later this year, she plans to travel to the central African nation of Gabon to help set up a breast cancer training program.

Historically, when it comes to providing medical aid to less developed nations, communicable diseases like malaria and HIV have attracted more funding, time and effort from international healthcare providers. But in 2011, the United Nations called for a new focus on non-communicable diseases, which are responsible for two-thirds of deaths worldwide each year. “That carries a lot of weight,” says Dr. Silvia Formenti, chairman of the Department of Radiation Oncology and the Sandra and Edward Meyer Professor of Cancer Research at Weill Cornell Medicine, radiologist-in-chief at NewYork-Presbyterian/Weill Cornell Medical Center and an ICEC board member. Despite the U.N.’s decree, funding to combat these diseases remains inadequate, she says, but “what we can do, through our work, is to go to those countries and help them use the resources and expertise that we can provide them.” Noting that Dr. Balogun was recently awarded a $35,000 competitive grant from the Department of Radiation Oncology to support her international outreach, Dr. Formenti adds, “We’ll do whatever we can to support her and help her realize this dream.”

The disparities Dr. Balogun hopes to confront are stark — especially when it comes to radiation therapy, which more than half of all cancer patients require at some point during their illness. “In New York City alone, we have at least seven centers where you can get radiation therapy,” Dr. Balogun notes. “In developing countries, they may have one, if that. About 27 African countries have no radiation therapy services whatsoever — and there are millions of people in each of those countries. Radiation is good for helping to reduce pain; what do they do for palliation? There are some cancers you cannot cure without radiation; what do they do for a cure?”

Some obstacles to radiation therapy are common across the developing world. In addition to a shortage of equipment, many countries have no insurance system, forcing patients to pay hefty expenses out of pocket. There are rarely enough qualified physicians, medical physicists or radiation therapists. And when radiation equipment exists, the technology is often decades old. “In Armenia they were still using machines from the Soviet era,” Dr. Balogun says. “In Nigeria, I realized that their machine had been commissioned back in the 80s — it was a cobalt machine rather than a modern linear accelerator. But it’s a matter of money. A linear accelerator costs millions of dollars.”

Dr. Balogun and her colleagues at ICEC are approaching manufacturers about offering radiation equipment at a discount to developing countries, establishing long-term payment plans, or creating affordable versions of their devices for use in places where the cost would otherwise be prohibitive. Meanwhile, she says, each country has its particular challenges. Something as basic as reliable electricity — a rarity in some sub-Saharan countries — can affect the availability of radiation treatment, Dr. Balogun says, and it may make sense to delay upgrading to newer technology, which is more vulnerable to power supply disruptions. Volatile political situations can also affect cancer care; in fact, Dr. Balogun was forced to postpone her Gabon trip, initially planned for September 2016, because of instability following an election. The delay has been frustrating, but she’s hopeful she’ll be able to go before the end of this year. She also plans to return to Armenia and launch a training program in gynecologic oncology, and will set up a weekly teleconference with doctors in both countries, so she can continue to advise them from her base in New York.

Throughout her travels, Dr. Balogun often reflects on her aunt’s case. If she’d had access to early screening, if her radiation treatment had come sooner and been delivered by better-trained medical staff, perhaps the outcome might have been different. “If she were in a developed country, would she have survived?” Dr. Balogun wonders. “I do think about that from time to time. I’ve met a number of women who remind me of my aunt and that I have to keep going, keep pushing. I couldn’t save her, but maybe I can save them.”