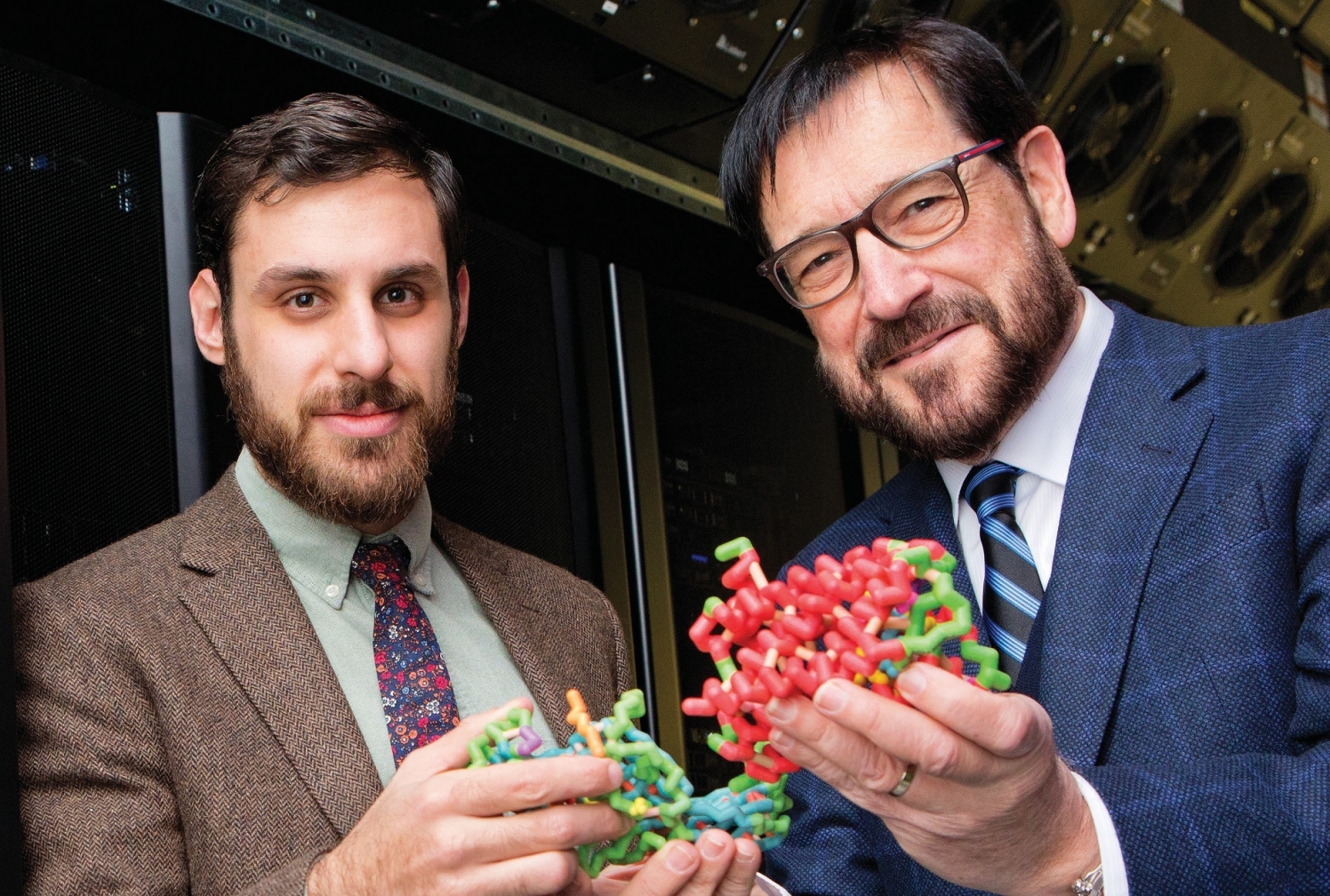 Dr. Michael LeVine, (PhD ’16), grew up in Taunton, Massachusetts, a city about 40 miles south of Boston. One of the oldest towns in the United States — founded in the 1630s — Taunton in recent decades has suffered through a very modern scourge: the staggering opioid epidemic that has devastated so many communities nationwide. As a high school student in the mid-aughts, Dr. LeVine saw first-hand the societal costs of addiction. “I was friends with a lot of people who had drug abuse problems,” says Dr. LeVine, an instructor in physiology and biophysics and a junior fellow in Weill Cornell Medicine’s HRH Prince Alwaleed Bin Talal Bin Abdulaziz Al-Saud Institute for Computational Biomedicine. “That got me interested in what I could do to make a dent in this crisis.”

In college, Dr. LeVine gravitated toward psychology, thinking that if he learned about depression and how drugs impact behavior, he could eventually treat people with addiction disorders. But he soon realized that he was more interested in how drugs target mechanisms in the brain, so he began studying neuroscience, then shifted to molecular biology. He finally settled on biophysics, where he became fascinated by how certain proteins in the brain — each one 100 million times smaller than a human cell, and with its own function — receive and transmit chemical signals. Dr. LeVine now aims to help people with a wide variety of diseases and conditions: his research into the fundamentals of how these machines work could have broad implications beyond drug addiction, informing the development of targeted therapies for depression, brain injury and more.

Dr. LeVine focuses on tiny machines called receptors, which reside in the membranes of brain cells; there, they interact with chemical information outside the cells, bind to that information and bring those messages inside. Addictive drugs, like opioids, and drugs of abuse, such as hallucinogens, impact the brain and behaviors by interacting with receptors. Hallucinogens like LSD, for example, interact with the serotonin receptor, while opioids like heroin target the opioid receptor. “When you hijack the natural process of what receptors are meant to do, it can have far-reaching effects on the body,” Dr. LeVine says — adding that understanding exactly how receptors work could help clarify the mechanisms behind drug abuse and lead to better therapeutic agents to halt them.

As a PhD candidate, Dr. LeVine worked under Dr. Harel Weinstein, the Maxwell M. Upson Professor of Physiology and Biophysics and chairman of the department, who remains a collaborator and mentor. It was in Dr. Weinstein’s lab that Dr. LeVine, supported by a grant from the National Institute on Drug Abuse, made significant advancements in understanding how two chemicals that bind to the same receptor can have very different effects. He specifically looked at the serotonin 2A receptor, which typically binds to serotonin — a chemical in the brain that helps regulate mood — but can also bind to hallucinogens, which interfere with the brain’s natural communication processes. “Knowing that both serotonin and hallucinogens target the same receptor told us that these molecular machines are much more complicated than they first seemed,” Dr. LeVine says.

Working with Dr. Weinstein, Dr. LeVine also advanced what scientists know about a phenomenon called allostery, without which proteins wouldn’t function. Allostery occurs in a protein when two parts of the molecule, separated by a significant distance, move in tandem because of unseen forces. To illustrate this, Dr. LeVine compares a receptor being activated to the process of flipping a light switch; the resulting action — the light turning on — occurs almost instantaneously, but relatively far away. The same thing happens in a protein. If a chemical signal binds to a receptor, an action occurs in a different part of the protein almost simultaneously. Without this form of communication, the molecular machines wouldn’t function, Dr. LeVine says. Dr. LeVine learned more about how this process works by using statistical mechanics, probability theory and other computer modeling tools. “Michael is a genuine star in biophysical sciences — he is exceptionally talented and highly motivated,” says Dr. Weinstein. “His work represents a clear scientific evolution, and is an example of why it’s so important to have young, creative people in this field, who look at problems with a fresh perspective.”

The next step — one that Dr. LeVine and others are now pursuing — is to build a synthetic protein from scratch, a feat that would have great relevance in biomedicine and biotechnology because it would enable the development of more efficient and accurate medical tests and more targeted therapies. “Anyone who is trying to understand how molecular machines work probably has the aspiration of building one of their own someday,” Dr. Weinstein says. “It’s definitely the future.” While there aren’t many success stories yet, in December 2014 researchers from UCSF and several other institutions reported in Science that they’d created a synthetic version of a type of protein called a transporter, which could move zinc from one side of the cell membrane to the other. “It was a simple machine,” Dr. LeVine says, “but it showed us that this could be done.” But building more complex machines likely won’t happen for many years, Dr. LeVine says. Among other things, the process will require highly advanced computer modeling, akin to the simulations that aerospace engineers run to ensure that a new plane will fly — and he acknowledges a great deal of trial and error lies ahead. “In the past, developing a new drug meant trying to break or disrupt the function of a molecular machine,” Dr. LeVine says. “But the ultimate goal is to build one that’s faster or stronger, or performs entirely new functions.”