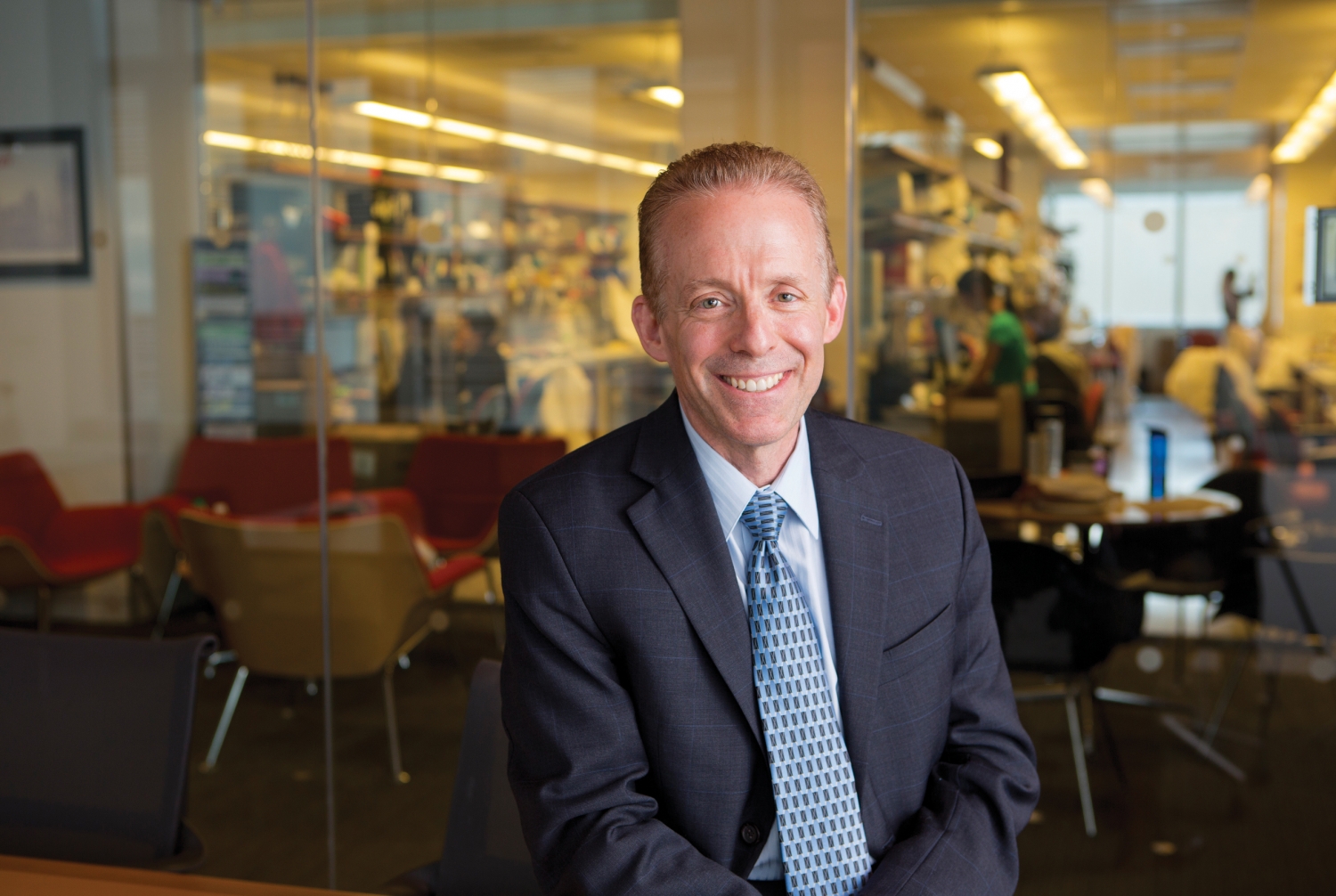 Last spring, veteran pharmaceutical executive and entrepreneur Dr. William Polvino was tapped as CEO of Bridge Medicines, a company established in October 2016 to further the development of drugs nurtured by the Tri-Institutional Therapeutics Discovery Institute. The Tri-I TDI, as it’s known, is a nonprofit that brings together Weill Cornell Medicine, Memorial Sloan Kettering Cancer Center, The Rockefeller University and Takeda Pharmaceutical Company Ltd. to support investigations into promising therapeutics pioneered by investigators on the three campuses. Headquartered in the Belfer Research Building, Bridge Medicines is a collaborative effort by the TDI partners and two investment firms, Deerfield Management and Bay City Capital.

Dr. Polvino has more than a quarter-century of experience in pharma, having held senior positions at firms such as Merck and Wyeth and served as president and CEO of Veloxis Pharmaceuticals and Helsinn Therapeutics. An alumnus of Rutgers Medical School, he trained in internal medicine at Massachusetts General Hospital and did a fellowship in clinical pharmacology at the NIH.

It’s early days for Bridge Medicines, but how is it going so far?

It’s wonderful. We’re extensively reviewing the portfolio of molecules that are maturing out of the Tri-I TDI and meeting a number of the promising investigators at the three institutions to develop closer ties and let them know about the resources available at TDI and Bridge Medicines. So I spend a lot of my time walking back and forth across the street; it’s only two blocks, but I know every crack in the sidewalk.

Why are enterprises like Bridge Medicines and TDI essential to today’s drug-development pipeline?

Almost all drugs get their start from a discovery or invention, often in a university setting. But for many investigators, aspects of drug development are costly, time-consuming distractions from what they’re best at. TDI and Bridge Medicines put the skill of a biotechnology or pharmaceutical company on the campuses of three great institutions. This enables a fast path and high level of communication between inventors — the clinicians and scientists who are brilliant at what they do — and people who have devoted their careers to navigating the drug development, regulatory and clinical trial paths.

Could you describe how Bridge Medicines takes TDI into subsequent steps of drug development?

By the time a product leaves TDI, the molecule is essentially defined and its pharmacology has been demonstrated to be active in a relevant animal model. Bridge Medicines picks up from there; we manufacture a sufficient quantity of drug at high purity, with quality controls in place such that it can be used to open an investigational new drug (IND) application, which is filed with the FDA to enable you to do clinical studies. Our job, in short, is to move a drug from the candidate stage to the IND stage, and hopefully into early clinical trials as well. We view TDI and Bridge Medicines as a relay race, where the second runner has to be at full speed when the first one hands off the baton. Everything is on a clock defined by the patent law, which provides a fixed amount of time during which you can recover the costs of transforming an invention into a new medicine. That clock starts ticking the day you file the invention patent — even though you may be years away from a product — and it continues to run whether or not you’re making progress. So if something is not moving forward, it’s losing value.

How does Bridge Medicines fit into 21st century academic medicine? Why would bench and translational scientists want to be part of it?

Bridge Medicines is a revolution. It’s something that has never existed before — a pre-fueled racecar, if you will, ready to go with the inventions as they come out of academia, and funded to do the work. I’ve been a CEO for two other companies and have raised several hundred million dollars in my career; it is extremely time consuming and you can’t move projects forward as quickly as you would like, simply because there’s no gas in the tank. And Bridge Medicines, by design, is extremely lean — at full capacity it will be in the neighborhood of 20 employees — with a focused mission on a finite period of the drug-development path.

What particular areas, types of drugs or diseases will Bridge Medicines focus on, if any?

It’s a broad vision, looking across therapeutic classes. Our only requirement is that because the move from TDI to Bridge Medicines is a change from a not-for-profit to a for-profit environment, we have a responsibility not only to patients but to our shareholders to develop products that ultimately return a profit.

In an era when drug costs are a major issue, can Bridge Medicines help lower prices?

Definitely. This is a collective goal of both TDI and Bridge Medicines. We are keenly focused on taking only the cream of the crop of drug candidates, keeping our staffing small and controlled, and thus managing overhead. Our goal is to move programs as rapidly as we can and ultimately launch them into new companies or as assets into existing companies. We intend to leverage our expertise to focus on the experiments and scientific steps that are most critical to deciding whether something has a probability of making it all the way.

Could you summarize Bridge Medicines’ criteria for choosing promising drugs?

We have a strong team of scientific advisers who look at candidates from a perspective of: Is it possible to manufacture it? Will it be very expensive? Do the science and the clinical program look strong? And do we have a strategy to address any gaps? Some of these considerations will be purely economic; we have to balance investment versus likelihood of success. The challenge and thrill at Bridge Medicines is that sometimes we’re working in completely innovative spaces, where we have the potential to develop a drug that may be a first-in-class molecule for a target no one has approached before.

What particular strengths do the Tri-Institutions bring to this?

There’s a tremendous amount of intellectual capability at all three, and I’m impressed by the spirit of collaboration among them. Oftentimes one investigator will point to another at a neighboring institution and say, “You should speak to him or her, since we’re working together.”

How might Bridge Medicines broaden New York City’s biotech sector, to create the kind of thriving industry that exists in Boston?

That is a key focus. Ultimately Bridge Medicines should be spinning out companies over time, and we expect and hope they will help develop a much more vibrant biotechnology and pharmaceutical hub here. Plus, I’m a diehard Yankees fan, so I love a bit of competition with Boston.

You’re a physician trained in internal medicine. Why did you choose a career in pharmaceuticals?

I grew up loving math and science and seriously considered a career in chemistry or biology; I pursued medicine because I loved the patients. But I found it frustrating that you’d often get to a point where you could manage symptoms, but patients weren’t making much fundamental progress in terms of getting better. People ask me if I miss clinical care, and on a certain level I do — but I also see what I do as an aspect of patient care. If I can help someone discover a new drug or treatment, then I’ve impacted the lives of far more patients than I would ever have been able to see personally.