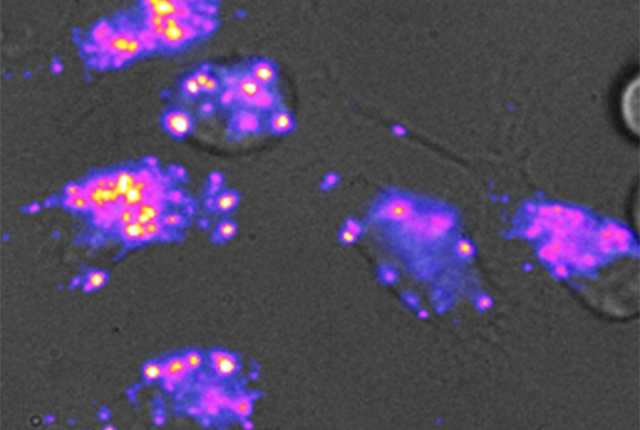 Infrared fluorescence from the lipid nano-sensor inside of live cells. All images: Heller Lab

Nano-sized sensors developed by Weill Cornell Medicine and Memorial Sloan Kettering Cancer Center researchers can measure lipids, or fat molecules, in special compartments within live cells. These sensors have important implications for the development of new therapies to treat many diseases.

Fats such as cholesterol that enter cells are normally broken down by structures called lysosomes. When lysosomes fail to clear these fats, they can accumulate and cause damage to tissues. This occurs in diseases such as fatty liver disease, atherosclerosis (in which arteries harden), neurodegenerative diseases like Alzheimer’s, and even cancer. 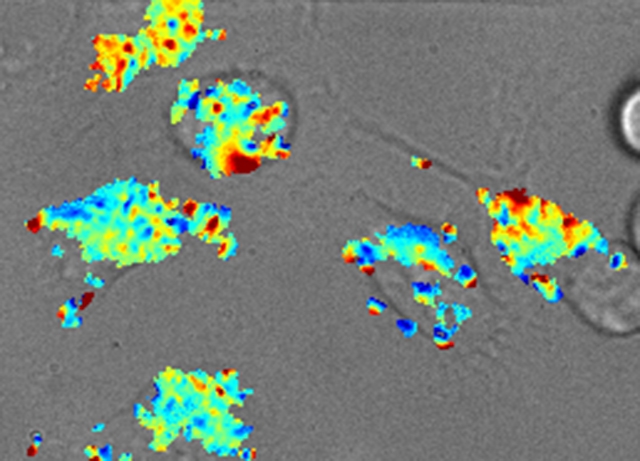 A map of fat content measured by the nano-sensor inside the lysosomes of live cells. Blue indicates fattier and red indicates less fatty.

“It is difficult to measure the amount of lipids stored within lysosomes, especially within live cells,” said senior author Dr. Daniel Heller, an assistant professor in the Pharmacology and Physiology, Biophysics and Systems Biology programs at the Weill Cornell Graduate School of Medical Sciences, and an assistant member at Memorial Sloan Kettering Cancer Center. “We think we developed a tool that will help researchers study how cells process fat.”

In a paper published Sept. 12 in the journal ACS Nano, Dr. Heller and colleagues report that they have created a nano-sensor that can accurately measure this lysosomal fat in live cells.

The sensor is made of a tiny carbon fiber, called a carbon nanotube, that is 1/100,000th the diameter of a human hair. The nanotube is wrapped in a specific sequence of DNA that makes it sensitive to lipids. Carbon nanotubes give off near-infrared light that can respond to certain stimuli, making them useful as biosensors. “We’ve engineered this nanotube to be sensitive to fat,” said lead author Dr. Prakrit Jena, an MSK research associate. “So when fat molecules come into contact with the nanotubes, the color of the light emitted by the sensor changes.”

The researchers “fed” the nanotube sensors to human cells in a petri dish. The sensors were taken up into the lysosomes in those cells. When fat was present in the lysosomes, the investigators, using a special camera, observed the fluorescent nanotubes changing color, becoming “bluer.”

“Carbon nanotubes glow in a color that your eyes can’t see, but when they bump into fat molecules, their color shifts,” said Dr. Heller, who is a co-inventor on a patent on the method and use of the nanotubes for detecting lipids.

The researchers also found that the sensors could detect when cells became less fatty. They took cells from a patient with Niemann-Pick type C, a rare genetic disorder, in which lipids accumulate in the cells of the body, and exposed them to a drug used to treat the disease. “We found that the sensor could see cells starting to expel cholesterol when treated,” said Thomas Galassi, a Weill Cornell graduate student in Dr. Heller’s lab. Importantly, the addition of the nanotube sensors had no negative effect on the cells.

The researchers believe that the nanosensors could be used to find new drugs for diseases where fat accumulation is implicated. “Many of these diseases have few treatments,” Dr. Heller said. “In the field of drug discovery and drug development, there aren’t a lot of ways to look at lipid accumulation in live cells and animals. If we want to know whether a drug is working, having that information is helpful.”