The Medical Center Archives are Home to Thousands of Historical Photos, Research Papers, Centuries-Old Patient Records and Much More 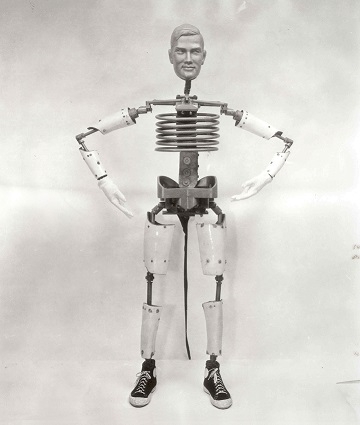 From the collected papers of automotive safety pioneer Hugh De Haven, a photo of an early crash-test dummy.

“We rarely get people who just accidentally show up,” Lisa Mix, Weill Cornell Medicine’s head archivist, says with a chuckle, “because you have to make a real effort to get here.” Located on the 25th floor of NewYork-Presbyterian/Weill Cornell Medical Center’s Baker Tower — and accessible only by a human-operated, limited access elevator — the archives are the repository of Weill Cornell Medicine’s history. Supported by NewYork-Presbyterian and Weill Cornell Medicine, they  contain  more  than  7,100  linear  feet of materials — primarily documents but also videos, sound recordings, physical objects and an estimated 20,000 photographs covering the medical college, the medical center and antecedent institutions  such  as the Bloomingdale Asylum and the Lying-In Hospital. The facility attracts researchers and scholars from both within and outside the institution, and its materials have been used in such projects as a PBS documentary on the 1918 influenza pandemic and Ken Burns’ “Cancer: The Emperor of All Maladies.”

Among the archives’ most intriguing holdings are hospital casebooks containing handwritten patient records dating from 1808 to 1932. They’re the focus of a current project by Dr. Curtis Cole, MD ’94, Weill Cornell Medicine’s chief information officer, who received a $50,000 grant from the Frank Naeymi-Rad and Theresa A. Kepic Foundation to scan the pages for the purposes of research and preservation. Dr. Cole is also overseeing an effort by a computer science master’s student at Cornell Tech to develop methods of machine-learning to transcribe the records into searchable text.

“You learn a lot of medicine by transcribing an old medical record,” Dr. Cole observes. “The ways that doctors view patients and how they conceptualize a case haven’t changed — and even much of the diagnosis is still the same.” Other gems include the archives’ oldest item: the charter from England’s King George III that established New York Hospital in 1771.

Part of Weill Cornell Medicine’s Samuel J. Wood Library, the archives are also home to the collected papers of numerous Weill Cornell Medicine researchers, chronicling their decades of discovery. The following pages showcase a sampling of those holdings, documenting work in fields from cancer to automotive safety. “The archives are a very special place,” says Dr. Cole. “It really is the crown jewel of the library.”

This story first appeared in Weill Cornell Medicine, Vol. 16. No. 2

As a research associate in the Department of Pathology in the 1940s and '50s, engineer and inventor Hugh De Haven conducted some of the earliest investigations into the survivability of automotive and aeronautic accidents — a subject in which he developed a passionate personal interest after a near-fatal crash while trying to qualify as a pilot in World War I.  In 1936, De Haven began studying free-fall accidents to learn how the body reacts to impact with such materials as pavement, car metal, soft earth and fencing. “He retained an interest in this subject and collected clippings and reports about such accidents throughout his life,” says the introduction to Weill Cornell Medicine’s De Haven papers. “His findings from these studies, and the implications they had in crash injury, were published in 1942 in an article in ‘War Medicine.’ Crash Injury research had, in effect, arrived.”

De Haven’s research, as a recent book on public health puts it, “provided strong evidence that the human body was less fragile than had been generally assumed, that the structural environment was the dominant cause of injury, and that the environment could be modified to reduce the likelihood of injury” — leading to such key safety measures as the three-point seatbelt (for which he was co-issued a patent in 1955), helmets and air bags. Prior to such investigations, he once noted, “people knew more about protecting eggs in transit than they did about protecting human heads.”

Physician-scientist Dr. Richard Silver ’50, MD ’53 (second from right in the photo above), has dedicated his career to the research and treatment of leukemia and other blood disorders, and his work on the subject stretches back to early studies on the use of chemotherapy. Dr. Silver — a “Triple Red” who also did his residency at NewYork- Presbyterian /Weill Cornell Medical Center— still serves on the faculty as a professor of medicine; Weill Cornell Medicine’s Dr. Richard T. Silver, M.D. Myeloproliferative Neoplasms Center was named in his honor in 2014.

The study described in these pages “is very important historically, because it is the first protocol for a small cooperative trial for the treatment of acute leukemia — the first cooperative trial among three institutions for any cancer,” Dr. Silver says. That concept — which, he says, facilitates much more rapid results than any single institution could achieve on its own — originated in the late '50s at the National Cancer Institute “and led to the formation of large cooperative cancer groups such as Cancer and Leukemia Group B, of which Weill Cornell Medicine was a main member.” (That group continues under a different name, led by Dr. John Leonard, the Richard T. Silver Distinguished Professor of Hematology and Medical Oncology and associate dean for clinical research.) Dr. Silver notes that the original protocol is in the Archives of the NIH; the Weill Cornell Medicine papers are a carbon copy. “I was listed on the protocol because I took care of the patients,” he says, “and knew how to type.”

Biochemist Dr. Vincent du Vigneaud spent 25 years on the Weill Cornell Medicine faculty — and after retiring with emeritus status, he taught on the Ithaca campus. In 1955, during his tenure at Weill Cornell Medicine, he won the Nobel Prize in chemistry for his studies and synthesis of oxytocin, the “love hormone” that plays a key role in childbirth and human bonding. He also did groundbreaking research on synthesizing oxytocin, penicillin and other substances. “If one views the totality of Dr. du Vigneaud’s contributions to science,” says a biographical memoir published by the National Academy of Sciences in 1987, “one recognizes a thread of continuity connecting sulfur-containing, biologically important compounds” that extends from insulin to penicillin, oxytocin, vasopressin (a hormone that regulates water retention) and more.

This memo to Dr. du Vigneaud on a key penicillin study comes from Mary Elizabeth Wright, a Weill Cornell Medicine research associate in biochemistry in the '40s; it mentions another research associate, Carl Stevens. “I have had the privilege and the thrill of following those researches that I’ve always wanted to do,” Dr. du Vigneaud once told a reporter. “I’ve always had the privilege of working on what I’ve wanted to work on. I have been accompanied in the various stages of these exploratory researches by a group of fine and loyal associates.”

Famous as the inventor of the Pap smear to detect cervical cancer, Dr. George Papanicolaou spent a half-century on the Weill Cornell Medicine anatomy faculty, where he did much of the research that led to the life-saving screening method. “Millions of women have received the Pap test, and deaths from cancer of the uterus have been greatly reduced because of the test,” says the Papanicolaou Society of Cytopathology. “It was predominantly through Dr. Papanicolaou’s efforts that cytology became accepted as a basis for diagnosis.”

While the Weill Cornell Medicine archives are primarily geared toward preserving documents and photos, its physical objects include Dr. Papanicolaou’s microscope and slides. As one journal’s biography of the man affectionately known as “Dr. Pap” notes: “Papanicolaou was a dedicated scientist, as modest as he was hardworking. He did not take vacations, worked seven days a week, and relished immersing himself in the wonders of his research.”