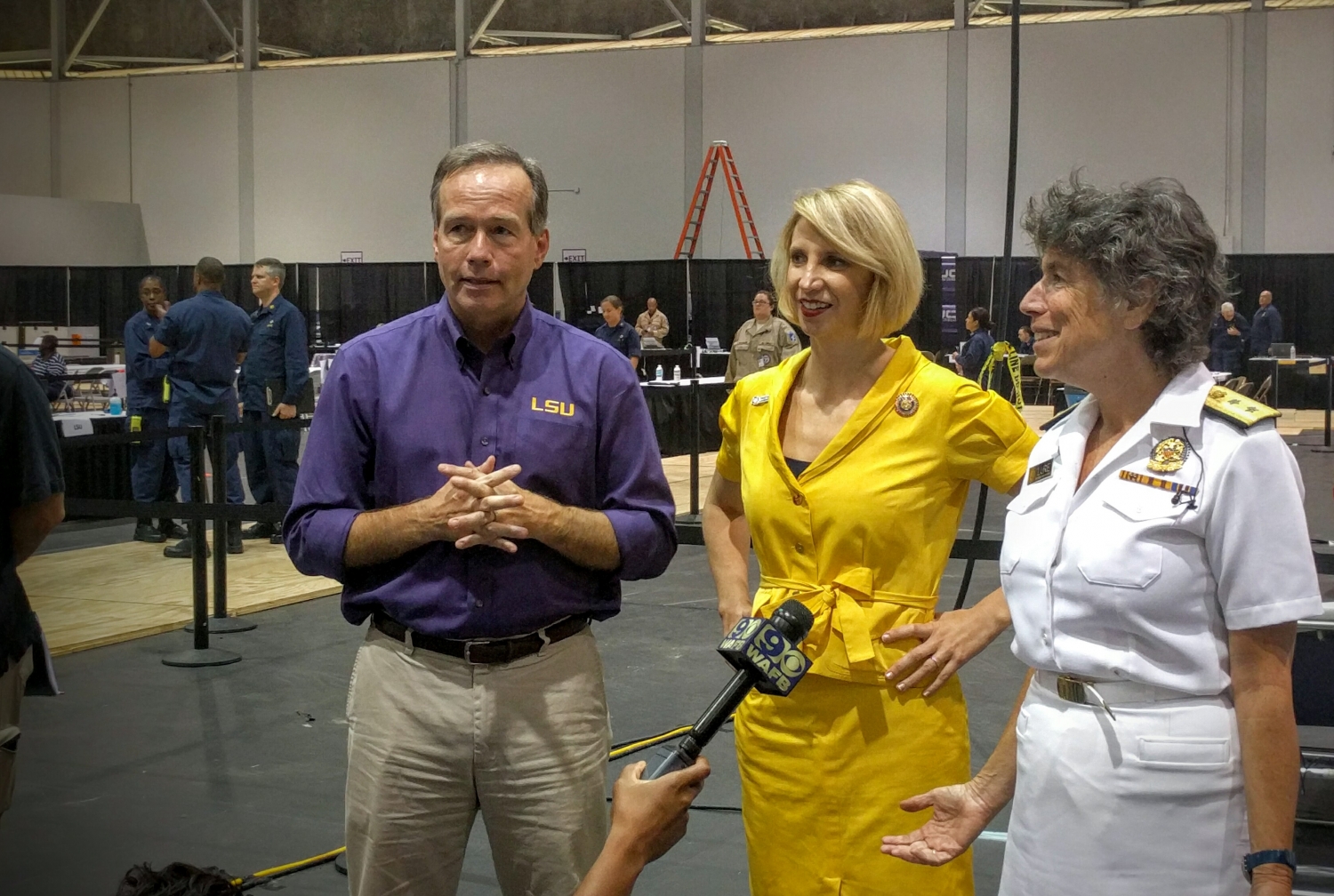 Dr. Rebekah Gee (center), F. King Alexander, president of Louisiana State University (left), and Dr. Nicole Lurie, assistant secretary for preparedness and response at the United States Department of Health and Human Services (right), speak to media at the Medical Special Needs Shelter, located on the LSU Baton Rouge campus, in August 2016. The shelter opened one day after the onset of flooding. Photo provided by the Louisiana Department of Health.

Dr. Rebekah Gee, MD ’02, is the top doctor in a state with some of the nation’s most serious health problems. Since January 2016, Dr. Gee has led Louisiana’s health department — working to improve outcomes and promote wellbeing in a state that has long been ranked at or near the bottom on such measures as obesity, infectious diseases, infant mortality, childhood poverty, smoking, and rates of cancer and heart disease. “I’ve always been drawn to places that need help,” says the ob/gyn. “Part of why I like working in Louisiana is that it has some of the greatest challenges.”

As secretary of the state’s Department of Health, Dr. Gee oversees an enterprise with some 5,000 employees and an annual budget of $14 billion at a tumultuous time for American healthcare policy. Early in Dr. Gee’s tenure, she oversaw implementation of the state’s Medicaid expansion, which enrolled more than 350,000 adults in its first six months. But as Congress threatens to eliminate provisions of Obamacare and the future of federal healthcare subsidies becomes increasingly uncertain, such gains run the risk of sliding backward. “My policy approach is that I’ll do the best I can for the largest number of people, and reduce harm,” she says. “But in my view, healthcare is a right. This is the wealthiest country on Earth, and there’s no reason why this great nation can’t provide basic primary and preventive healthcare to its people. To me, it’s an embarrassment that we’re even debating it."

Dr. Gee’s passion for medicine stems in part from personal tragedy: when she was 16, she lost her mother to breast cancer. “I was fortunate to be exposed to kind, compassionate physicians who alleviated her suffering and allowed her to die with grace and dignity, and that was a powerful example,” she says. “I also knew I wanted to be in a profession where I could be of service to others — where every day, I’m definitely helping someone. And medicine is the pre-eminent example of that.” After earning an undergraduate degree in American history and a Master of Public Health from Columbia, she matriculated at Weill Cornell Medicine, where her formative experiences included conducting research as a medical student. “She was enthusiastic, hardworking, keenly intelligent and driven to really make a difference as a doctor,” says one of her mentors, Dr. Joseph Fins, MD ’86, the E. William Davis, Jr. MD Professor of Medical Ethics, under whom Dr. Gee conducted research on palliative care. “She saw medicine as not only the care of individual patients but of society. She was bright, earnest, and idealistic, but at the same time focused on how the levers of policy could be pulled to achieve what might be lofty goals.”

Dr. Gee says she garnered many of her administrative skills by osmosis, as the only child of a prominent leader in higher education. Her father, E. Gordon Gee, is currently president of West Virginia University; he previously led Brown, the University of Colorado, Vanderbilt and Ohio State. “I grew up as a fly on the wall, watching someone who was leading a big organization in a very political role,” says Dr. Gee, a Utah native. “To some extent, that type of job is in my DNA.” When she took the post as secretary, her dad advised her “to have nerves like sewer pipes” — meaning that she should let the negative parts flow through her and not take them to heart. It’s been sound advice for navigating a highly visible administrative position in a political era when civility is often in short supply. “Things become very personal; it’s no longer just policy disagreements, but vicious attacks on individuals — and frankly, that’s on both sides of the aisle,” says Dr. Gee, whose résumé includes serving on the U.S. Health and Human Services transition team under President Barack Obama. “But I’m running the equivalent of a Fortune 500 company that’s half of our state budget, so I have to be willing to be the target.”

After a residency in ob/gyn at Harvard, Dr. Gee earned a Master of Science in health policy research from Penn as a Robert Wood Johnson Clinical Scholar. It was during that time that another life-altering tragedy struck her family. While riding a Vespa scooter with her husband — an endocrinologist whom she had wed just 18 months earlier — they were struck by an SUV. Her husband died after two weeks in a coma; Dr. Gee narrowly survived, suffering 18 broken ribs, a fractured femur and a temporarily paralyzed left arm, among other injuries. She spent three months in a wheelchair and had to learn to walk again. “I’ve had multiple surgeries, I’ve been in an ICU and a rehab hospital, I’ve had home healthcare — so I certainly understand the patient experience,” Dr. Gee says. “And I’ll tell you, I learned to appreciate nurses in a way that I didn’t before, because when you’re a patient, your nurse is your hero. It certainly informs how I think about patients and what’s important to them.”

Dr. Gee met her second husband, an attorney and Louisiana native, while visiting New Orleans for a jazz festival. She eventually relocated there and took a position as director of the state’s Birth Outcomes Initiative, during which she spearheaded a campaign to end elective deliveries before 39 weeks of gestation — which required driving all over the state to convince often-skeptical obstetricians with her evidence-based argument about the negative outcomes associated with the practice. Those and other efforts ultimately led, she says, to statewide drops of more than 85 percent in early elective deliveries, of 25 percent in infant mortality and of 10 percent in admissions to the neonatal ICU. She later served as the state’s director of Medicare and Medicaid before being named secretary by Governor John Bel Edwards, a Democrat.

Now a mother of five, with three stepchildren and 4-year-old twin daughters, Dr. Gee lives in New Orleans and commutes an hour and a half to the capital in Baton Rouge. She stills sees patients (“not as much as I like to, but I think it’s important”) — something she insisted on when taking the job. Dr. Gee notes that while she’d never be taken for a native Louisianan, she has tremendous affection for the state — and especially for New Orleans, which she describes as a mash-up of her two favorite foreign cities, Paris and Havana. Plus, she says, her outsider status has its advantages. “Sometimes if you’ve grown up and lived in a system your whole life, it’s more difficult to see the flaws,” she says. “Not being from here, I can see the snags in the wool — I can call them out and work to change them.” Dr. Fins, her medical school mentor, lauds Dr. Gee as a prime example of why he’s in academic medicine, calling her precisely the sort of national healthcare leader that Weill Cornell Medicine aims to train. “Too often, policy is driven by expediency,” he says. “But if you start with a conceptual frame that respects and values people, it can help point your compass to an ethical North Star — and Rebekah always had a good compass.”

This story will appear in Weill Cornell Medicine, Vol. 16. No. 3