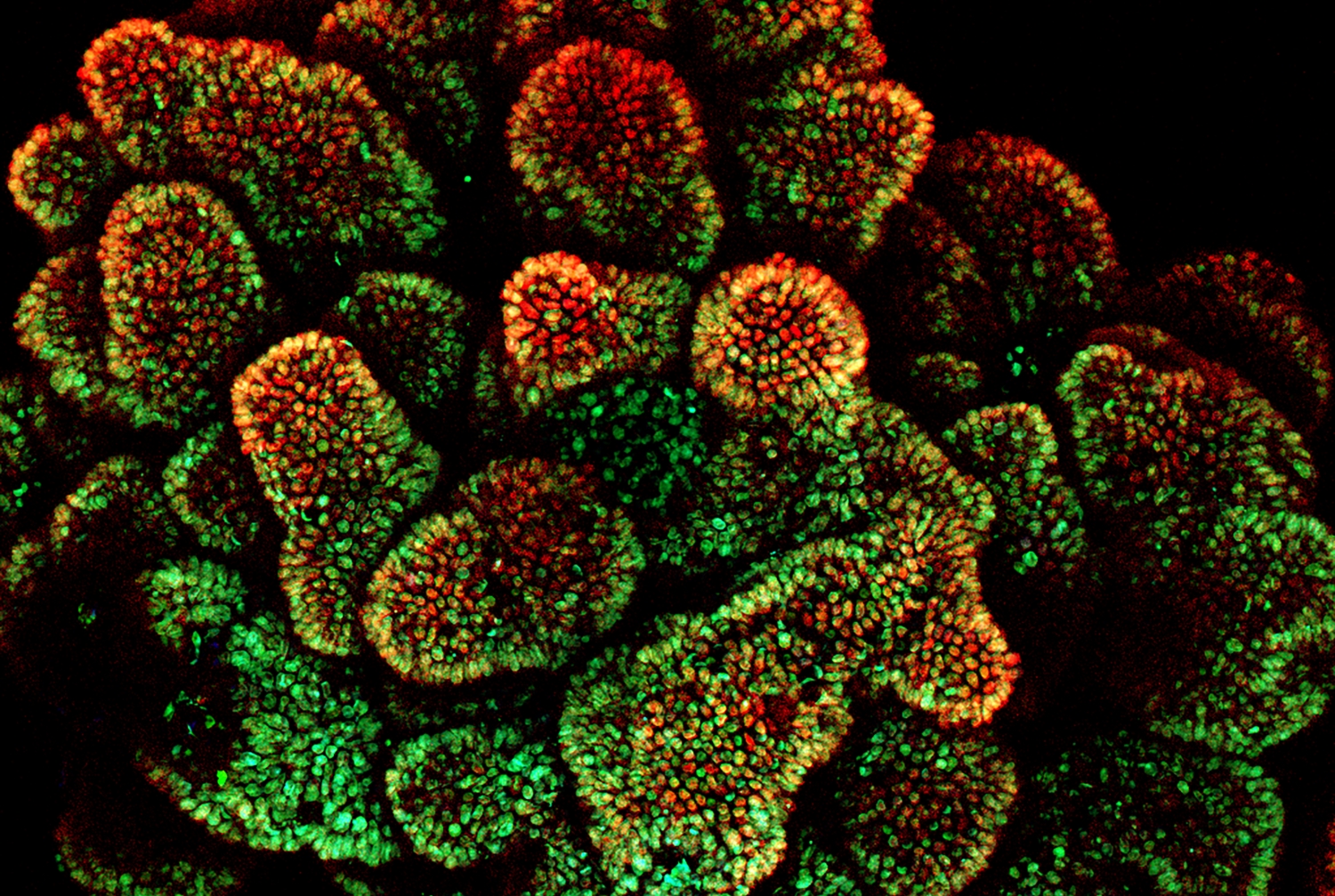 This is a projection image displaying all of the colon organoid layers. The red color represents cells that line the colon called epithelial cells and the green color represents an increase in the number of cells that are proliferating. The organoids are derived from induced pluripotent stem cells, which can differentiate into any type of cell in the body, derived from a patient with a colorectal disease called familial adenomatous polyposis (FAP). Photo credit: Dr. Miguel Crespo.

The first-ever “disease in a Petri dish” platform that models human colon cancer derived from stem cells has been developed by Weill Cornell Medicine investigators, allowing them to identify a targeted drug treatment for a common, inherited form of the disease. The discovery also overcomes a longstanding challenge of using mice to research this form of cancer, as they do not typically develop the disease.

In the study, published June 19 in Nature Medicine, the scientists used human-induced pluripotent stem cells (iPSCs), which can in principle differentiate into any type of cell in the body, that were derived from the skin of two patients with an inherited form of colorectal disease called familial adenomatous polyposis (FAP). With FAP, large intestine cells develop into numerous polyps that for these patients eventually become colon cancer. Using iPSCs, they developed 3D structures called colonic organoids that closely represented large intestine tissue systems and then performed drug testing.

“Creating an effective testing platform for human colon cancer has been a challenge for the entire field,” said co-senior study author Dr. Todd Evans, the Peter I. Pressman, M.D. Professor in Surgery, and a professor of cell and developmental biology in surgery at Weill Cornell Medicine. “The protocols for modeling human colon disease for drug testing just weren’t there until our team developed a stem-cell-based large intestine tissue system.”

Colon and rectal cancers are the second-leading cause of cancer deaths in America. In 2017, it is estimated that 50,260 people will die from the disease and 135,430 new cases will be diagnosed.

The investigators confirmed through a variety of steps including genomic DNA sequencing and gene expression profiling that they had grown large intestine cells with either of two different FAP mutations, FAP8 or FAP9, and that a gene that when mutated allows FAP cells to grow out of control, called APC, was inactivated. They also created colonic organoids using stem cells derived from a person without FAP for comparison.

Next, they tested the colonic organoids with drugs to measure response. The researchers found that two drugs, XAV939 and rapamycin, significantly curbed cell proliferation; but also, significantly decreased growth in the organoids developed without FAP, suggesting that those drugs could harm healthy colon tissue. Another drug, geneticin, known for its ability to rescue gene activity for some types of mutations, successfully restored normal growth in the FAP9 organoids, yet had no impact on the FAP8 or healthy control organoids.

“Our results demonstrate that we can use this platform to model colon cancer and identify precision medicines that may work to target specific genetic mutations driving the disease,” said co-senior author Dr. Shuibing Chen, associate professor of chemical biology in surgery and of biochemistry at Weill Cornell Medicine.

“The beauty is that we can make patient-specific organoids,” Dr. Evans added, “increasing the likelihood of predicting which drugs may work and learn about any undesirable effects, all before we treat the patients.”