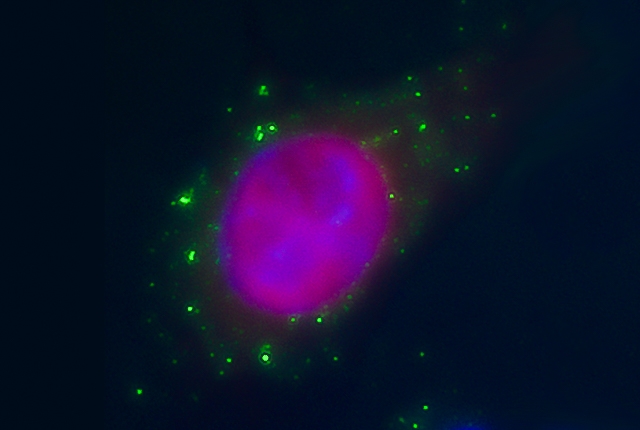 This image shows an irradiated cancer cell with small amount of DNA (green) located in the cytoplasm. The DNA’s location triggers a cellular response that mimics a viral infection, stimulating the immune system to become activated against the cancer. Image credit: Dr. Claire Vanpouille-Box

An enzyme implicated in autoimmune diseases and viral infections also regulates radiation therapy’s ability to trigger an immune response against cancer, Weill Cornell Medicine scientists found in a new study. Their discovery can help to better tailor treatment for patients.

Immunotherapy is an innovative approach to cancer treatment that unleashes the power of the immune system to fight cancer, and has revolutionized treatment for several cancers. However, only a minority of patients responds to the treatment. Radiation therapy may boost patients’ responses to immunotherapy, but the best way to achieve this effect has remained unclear.

In a study published June 9 in Nature Communications, investigators discovered in mice that radiation elicits the accumulation of DNA in a cellular compartment where it mimics the presence of a virus, eliciting molecular signals that are normally triggered by infection. The most important signal, known as interferon-beta, is required to activate immune cells that can kill virally infected cells. Thus, radiation therapy tricks the immune system to see the cancer cells as if they were infected by a virus, and by doing so, it activates the immune system against the tumor.

However, not all ways used to irradiate the tumor achieve this effect, due to the induction of an enzyme that clears the DNA, called TREX1.

“We found that the induction of interferon-beta by radiotherapy is under the control of TREX1,” said senior study author Dr. Sandra Demaria, a professor of radiation oncology and of pathology and laboratory medicine at Weill Cornell Medicine and member of the Sandra and Edward Meyer Cancer Center at Weill Cornell Medicine. “When the radiation dose used is increased above a certain threshold, TREX1 levels increase in the cancer cells, blocking the production of interferon. Intriguingly, this mechanism of escape from immune detection by cancer cells irradiated with certain doses mimics one of the ways HIV evades the immune system.”

“The findings that TREX1 is a regulator of radiation therapy ability to activate the immune system and that its induction depends on the radiation dose used is potentially practice-changing, if these results are verified in patients,” said study co-author Dr. Silvia Formenti, chairman of the Department of Radiation Oncology, the Sandra and Edward Meyer Professor of Cancer Research and associate director of the Sandra and Edward Meyer Cancer Center at Weill Cornell Medicine, and radiation oncologist-in-chief at NewYork-Presbyterian/Weill Cornell Medical Center.

For their study, the researchers treated mice with breast or colorectal cancer with different doses of radiation therapy, and also studied these treatments in human lung and breast cancer cells. They then evaluated mouse tumors and human cells in the laboratory to determine what cellular changes occurred. Importantly, they demonstrated in the mice that blocking the induction of TREX1 restored radiation’s ability to induce effective anti-tumor immune responses when used with immunotherapy.

The team is now studying whether the doses of radiation that induce TREX1 in carcinomas are similar in other types of cancers. “This is important to help guide the choice of radiation to be used in clinical trials that test combinations of radiotherapy with immunotherapy in different cancers,” Dr. Demaria said.

Dr. Formenti is leading several studies testing these combinations in patients with lung and other cancers.