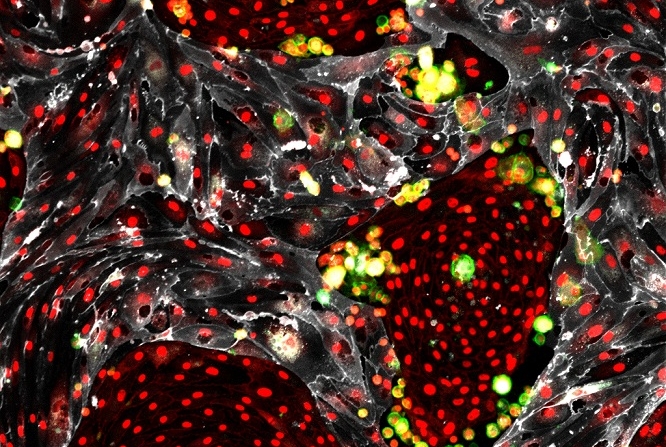 Researchers at Weill Cornell Medicine have discovered an innovative method to make an unlimited supply of healthy blood cells from the readily available cells that line blood vessels. This achievement marks the first time that any research group has generated such blood-forming stem cells.

“This is a game-changing breakthrough that brings us closer not only to treat blood disorders, but also deciphering the complex biology of stem-cell self-renewal machinery,” said senior author Dr. Shahin Rafii, director of the Ansary Stem Cell Institute, chief of the Division of Regenerative Medicine and the Arthur B. Belfer Professor at Weill Cornell Medicine.

“This is exciting because it provides us with a path towards generating clinically useful quantities of normal stem cells for transplantation that may help us cure patients with genetic and acquired blood diseases,” added co-senior author Dr. Joseph Scandura, an associate professor of medicine and scientific director of the Silver Myeloproliferative Neoplasms Center at Weill Cornell Medicine, and an oncologist at NewYork-Presbyterian/Weill Cornell Medical Center.

Hematopoietic stem cells (HSCs) are long-lasting cells that mature into all types of blood cells: white blood cells, red blood cells and platelets. Billions of circulating blood cells do not survive long in the body and must be continuously replenished. When this does not happen, severe blood diseases, such as anemia, bleeding or life-threatening infections, can occur. A special property of HSCs is that they can also “self-renew” to form more HSCs. This property allows just a few thousand HSCs to produce all of the blood cells a person has throughout one’s life. 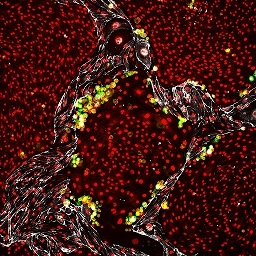 This image shows reprogrammed hematopoietic stem cells (green) that are arising from mouse cells. These stem cells are developing close to a group of cells, called the vascular niche cells (gray), which provides them with the nurturing factors necessary for the reprogramming.

Researchers have long hoped to find a way to make the body produce healthy HSCs in order to cure these diseases. But this has never been accomplished, in part because scientists have been unable to engineer a nurturing environment within which stem cells can convert into new, long-lasting cells—until now.

In a paper published May 17 in Nature, Dr. Rafii and his colleagues demonstrate a way to efficiently convert cells that line all blood vessels, called vascular endothelial cells, into abundant, fully functioning HSCs that can be transplanted to yield a lifetime supply of new, healthy blood cells. The research team also discovered that specialized types of endothelial cells serve as that nurturing environment, known as vascular niche cells, and they choreograph the new converted HSCs’ self-renewal. This finding may solve one of the most longstanding questions in regenerative and reproductive medicine: How do stem cells constantly replenish their supply?

The research team showed in a 2014 Nature study that converting adult human vascular endothelial cells into hematopoietic cells was feasible. However, the team was unable to prove that they had generated true HSCs because human HSCs’ function and regenerative potential can only be approximated by transplanting the cells into mice, which don’t truly mimic human biology.

To address this issue, the team applied their conversion approach to mouse blood marrow transplant models that are endowed with normal immune function and where definitive evidence for HSC potential could rigorously tested. The researchers took vascular endothelial cells isolated from readily accessible adult mice organs and instructed them to overproduce certain proteins associated with blood stem-cell function. These reprogrammed cells were grown and multiplied in co-culture with the engineered vascular niche. The reprogrammed HSCs were then transplanted as single cells with their progenies into mice that had been irradiated to destroy all of their blood forming and immune systems, and then monitored to see whether or not they would self-renew and produce healthy blood cells. 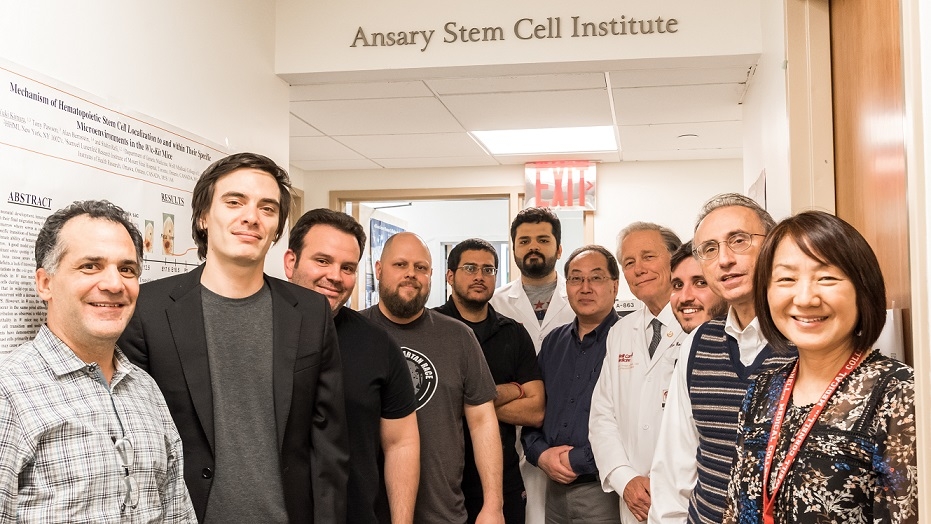 In collaboration with Dr. Olivier Elemento, associate director of the HRH Prince Alwaleed Bin Talal Bin Abdulaziz Al-Saud Institute for Computational Biomedicine, and Dr. Jenny Xiang, the director of Genomics Services, Dr. Rafii and his team also showed that the reprogrammed HSCs and their differentiated progenies — including white and red bloods cells, as well as the immune cells — were endowed with the same genetic attributes to that of normal adult stem cells. These findings suggest that the reprogramming process results in the generation of true HSCs that have genetic signature that are very similar to normal adult HSCs.Remarkably, the conversion procedure yielded a plethora of transplantable HSCs that regenerated the entire blood system in mice for the duration of their lifespans, a phenomenon known as engraftment. “We developed a fully-functioning and long-lasting blood system,” said lead author Dr. Raphael Lis, an instructor in medicine and reproductive medicine at Weill Cornell Medicine. In addition, the HSC-engrafted mice developed all of the working components of the immune systems. “This is clinically important because the reprogrammed cells could be transplanted to allow patients to fight infections after marrow transplants,” Dr. Lis said. The mice in the study went on to live normal-length lives and die natural deaths, with no sign of leukemia or any other blood disorders. 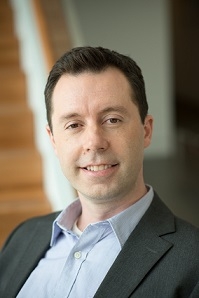 The Weill Cornell Medicine team is the first to achieve cellular reprogramming to create engraftable and authentic HSCs, which have been considered the holy grail of stem cell research. “We think the difference is the vascular niche,” said contributing author Dr. Jason Butler, an assistant professor of regenerative medicine at Weill Cornell Medicine. “Growing stem cells in the vascular niche puts them back into context, where they come from and multiply. We think this is why we were able to get stem cells capable of self-renewing.”

If this method can be scaled up and applied to humans, it could have wide-ranging clinical implications. “It might allow us to provide healthy stem cells to patients who need bone marrow donors but have no genetic match,” Dr. Scandura said. “It could lead to new ways to cure leukemia and myeloproliferative neoplasms, and may help us correct genetic defects that cause blood diseases like sickle-cell anemia.”

“More importantly, our vascular niche-stem-cell expansion model may be employed to clone the key unknown growth factors produced by this niche that are essential for self-perpetuation of stem cells,” Dr. Rafii said. “Identification of those factors could be important for unraveling the secrets of stem cells’ longevity and translating the potential of stem cell therapy to the clinical setting.”

Various study authors have relationships with Angiocrine Bioscience that are independent of Weill Cornell Medicine.