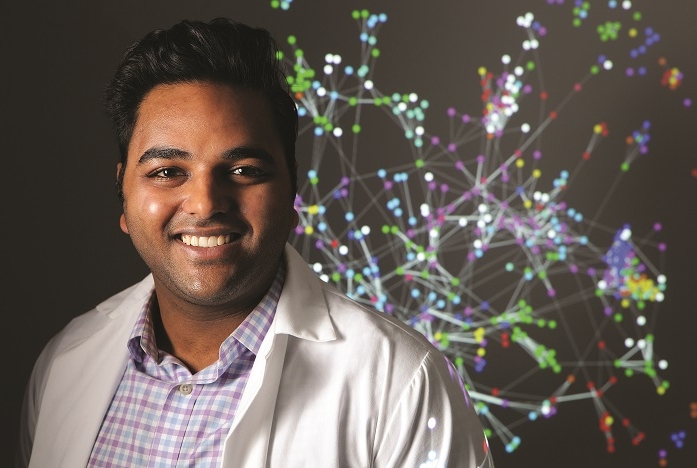 Growing up in Knoxville, Tennessee, Neel Madhukar always assumed he would become a physician. That’s what he told his high school teachers, and he pursued a premed track as an undergraduate at Emory University. But that plan shifted after his grandfather, to whom he had long been close, received a devastating diagnosis of liver cancer when Madhukar was a freshman. “There wasn’t that much they could do for it,” says Madhukar, now a fourth-year doctoral candidate in the Weill Cornell Graduate School of Medical Sciences. “I started reading up, and that’s when I realized that even the best doctor in the world can’t save every life, because so much more research needs to be done.”

It would be too late to cure his grandfather, who passed away just nine months after he was diagnosed. But today Madhukar — who ultimately opted to learn coding and pursue a PhD in computational biology — may be on his way to helping save many other lives. The 25-year-old is the lead developer of a new computational tool for drug discovery called BANDIT (for Bayesian Analysis to find Drug Interaction Targets). BANDIT, which won Madhukar a spot on Forbes’s “30 Under 30” list of young people making strides in the healthcare field in 2016, has the potential to supercharge the drug pipeline for everything from cancer to diabetes, getting new compounds into clinical trials more quickly and helping to ensure that drugs are tested in the patient populations in which they’re most likely to be effective, says Dr. Olivier Elemento associate professor of physiology and biophysics and associate director of the Institute for Computational Biomedicine, where he heads the Laboratory of Cancer Systems Biology. As a member of the Englander Institute for Precision Medicine and the Sandra and Edward Meyer Cancer Center at Weill Cornell Medicine, Dr. Elemento is Madhukar’s thesis advisor in the Tri-Institutional PhD Program in Computational Biology and Medicine. “Many potential drugs that are very promising, that could help patients, are not being pursued because their targets haven’t been found,” Dr. Elemento says. “BANDIT could greatly speed up our ability to find targets in a variety of diseases.”

The platform, which Madhukar and colleagues from the Elemento Lab unveiled in 2015 at the annual meeting of the American Association for Cancer Research, draws on recent progress in the computer science subfields of machine learning and artificial intelligence. (Among his collaborators was fellow grad student Kaitlyn Gayvert, who was named to the same Forbes list for her own work in the Elemento Lab, on a computational model to better screen drugs for toxicity.) Combining vast amounts of clinical, chemical, and genomic data from a variety of sources, BANDIT detects patterns and uses them to predict the targets of potential drugs and how the drugs will interact with human cells. When the researchers tested the platform on a set of drugs with known mechanisms, BANDIT was 90 percent accurate. And it is already leading researchers to new drugs, including an entire class of small-molecule anticancer agents called imipridones — one of which is now in clinical trials for acute myeloid leukemia, non-Hodgkin lymphoma and prostate and endometrial cancers. “It turned out this drug binds to a dopamine receptor, a protein called DRD2,” Madhukar explains. “If you know what your drug is binding to, you can better select for clinical trials, because you can seek out patients who have that protein expressed in their cancers. Right now, it takes $2.6 billion and 12 years to get one drug from the lab to the market. Our goal is to use these technologies in any way we can to accelerate that process and reduce the cost.”

To that end, Madhukar and Dr. Elemento are poised to launch a biotechnology start-up, which will partner with pharmaceutical firms that want to use BANDIT in the hunt for new drugs. Promoting his vision to venture capitalists might seem a world apart from the intensive computer coding that has occupied most of Madhukar’s short career, but he says the Bench to Bedside Initiative — which trains scientists from Weill Cornell Medicine, Memorial Sloan Kettering Cancer Center, and The Rockefeller University to develop business plans around their discoveries — has helped him hone his delivery. “It convinced us to think not only like scientists, but also like business people,” he says. “As scientists we focus arguments on numbers and specifics, but when you’re trying to talk to a broader audience, they want to hear what you care about, the most efficient way to accomplish it, and the financials behind it.”

While he is delaying the formal launch of the business until after he graduates in May, Madhukar has already settled on a name. The company will be called One Three Biotech, a nod to Weill Cornell Medicine’s address at 1300 York Avenue — and also a mission statement. “You can imagine drug development as a one, two, three process, right?” Madhukar says, offering a version of the pitch he has been giving to potential investors. “One, discover a drug. Two, research the drug. Three, get the drug approved. But we want to get from one to three much more quickly.”

This story first appeared in Weill Cornell Medicine, Vol. 16. No. 2.