Researchers Identify a Drug that Blocks Some Blood Cancers 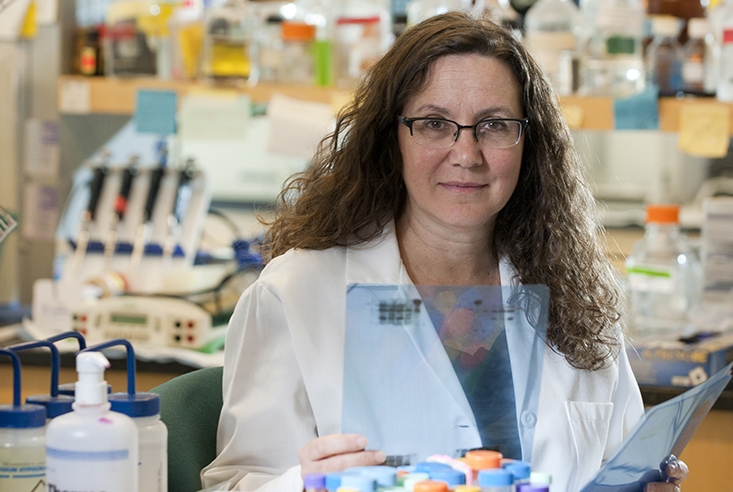 A compound identified by Weill Cornell Medicine scientists inhibits the growth of a rare blood cancer found in people with HIV-AIDS. Their research, published May 15 in the Journal of Clinical Investigation, also demonstrates that the compound deters multiple myeloma, another type of blood malignancy.

Few effective treatments are available for primary effusion lymphoma (PEL), a subtype of non-Hodgkin lymphoma (NHL) that is characterized by aggressive growth of cancer in the body cavities. It accounts for 4 percent of the people diagnosed with NHL.

“There are very few cases of primary effusion lymphoma diagnosed each year, but it has a bad prognosis,” said senior study author Dr. Ethel Cesarman, a professor of pathology and laboratory medicine and a member of the Sandra and Edward Meyer Cancer Center at Weill Cornell Medicine. While patients with PEL need new treatments, the newly identified compound may one day be another approach to treating multiple myeloma, a more common condition, she said.

Dr. Cesarman and her colleagues used a drug discovery process called high throughput assay screening that uses robotic automation and computer software to analyze the biochemical activity of a large number of compounds.

With this process, they identified a small molecule called 6-ethylthioinosine (6-ETI) that could potentially inhibit PEL. 6-ETI is a class of drug called a nucleoside analog; other types of nucleoside analogs are commonly used to treat leukemia and other blood cancers.

The researchers used 6-ETI to treat PEL cells derived from patients, as well as those from other forms of non-Hodgkin lymphoma, and examined them using laboratory methods that measure whether cells are alive. They found that 6-ETI caused PEL cells to die. They also found that 6-ETI treatment cured mice with PEL. However, the drug did not affect the other non-Hodgkin lymphoma subtypes.

To find out why some subtypes were unresponsive to the drug, the researchers looked for genetic differences in cancer cells resistant to 6-ETI. They discovered that cancer cells that produced high levels of an enzyme called adenosine kinase (ADK) responded to 6-ETI, while cancers with lower levels of the enzyme did not respond to the small molecule. Theoretically, doctors could one day test whether patients with any type of cancer have high levels of adenosine kinase to see if they might be candidates for drug treatment with 6-ETI.

Because PEL cells closely resemble plasma cells — types of white blood cells that make antibodies and are produced in bone marrow — researchers theorized that multiple myeloma, which is also a malignancy of the plasma cells, might produce high levels of adenosine kinase. Their subsequent studies of multiple myeloma cells in the laboratory found this theory to be true. When they treated the cells with 6-ETI, they responded to the drug.

To further investigate the therapeutic potential of 6-ETI, researchers tested the compound in cells from the tumor tissue of Weill Cornell Medicine patients with multiple myeloma, and found that the cancer cells died. This drug also showed treatment responses mice with multiple myeloma.

Dr. Cesarman and her colleagues are now trying to better understand how 6-ETI works. Using studies in tissues and mice, they are also trying to determine what other cancers expressing high levels of adenosine kinase might benefit from the drug. Dr. Cesarman hopes that 6-ETI will one day be offered to patients in clinical trials. “This compound could provide a much-needed approach to treat people with some forms of plasma malignancies as well as other cancers that express ADK,” she said.