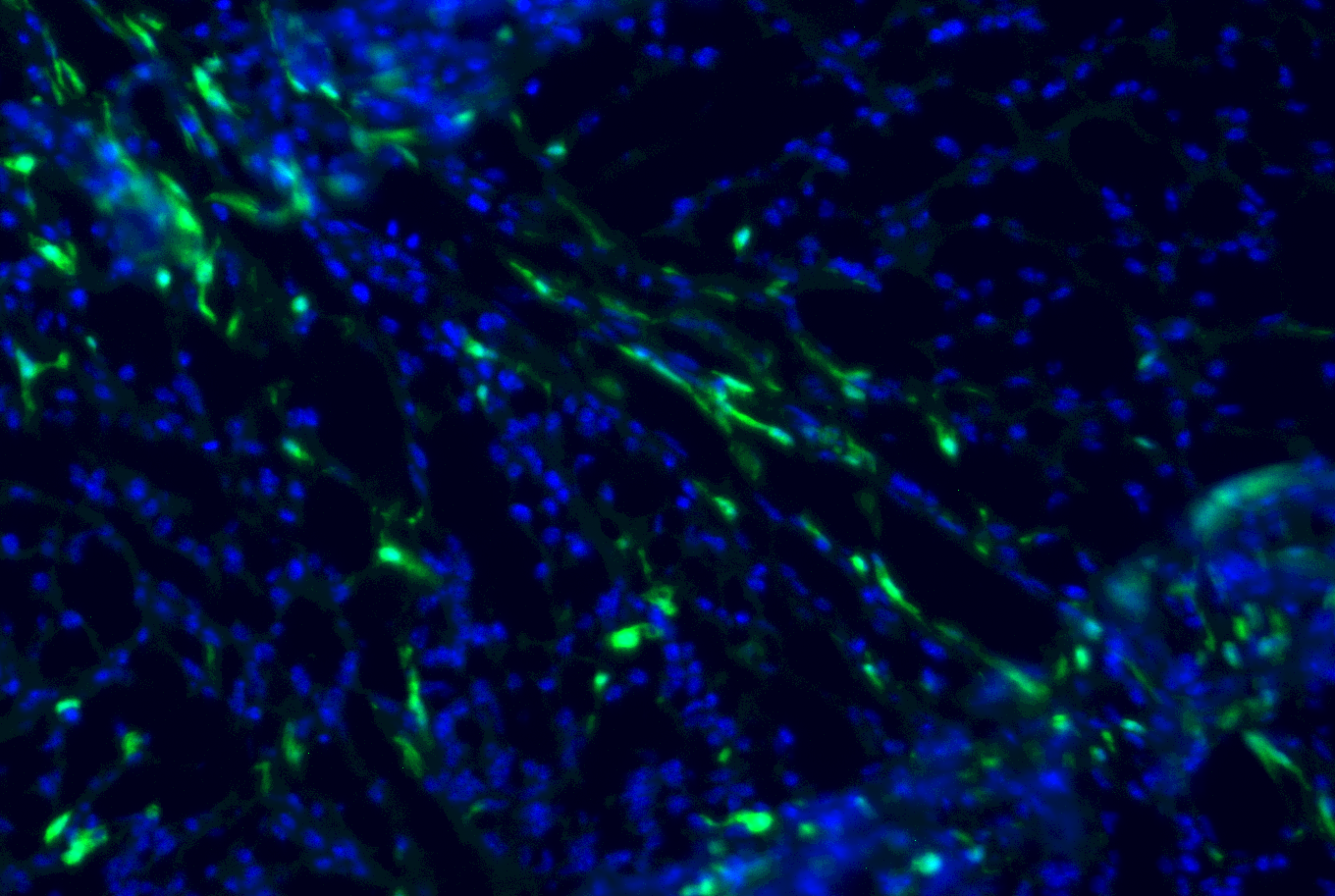 This image from fluorescent microscopy shows bone marrow-derived immune cells BMDC (green) traveling to the site of a brain tumor in mice. The tumor recruits BMDCs in order to transform into an aggressive malignancy. Image: Dr. Prajwal Rajappa.

Brain tumors recruit immune cells derived from bone marrow to transform what began as benign masses into deadly malignancies, according to two studies from Weill Cornell Medicine scientists. The findings suggest that inhibiting this cell-recruitment process can suppress tumor growth, and may offer a way to predict which patients are at greatest risk for developing brain cancer.

Brain tumors, or gliomas, are classified as either low-grade, which are relatively benign, or high-grade, which are malignant and fatal. Some patients can live with low-grade gliomas for years without issue, particularly if the tumors are in a part of the brain that doesn’t interfere with major cognitive functions. However, when the low-grade glioma develops into a malignancy, little can be done to halt or reverse tumor growth. Glioblastoma (GBM) develops in about 3 out of 100,000 people per year, and the typical prognosis is roughly 17 months. There has previously been no way to predict which low-grade tumors will become malignant—and when. 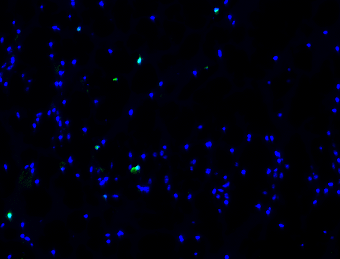 This image from fluorescent microscopy shows a decrease of BMDCs at the site of a brain tumor as mice are treated with a therapeutic agent. Photo by Dr. Prajwal Rajappa.

In two studies, published April 10 in the Journal of Clinical Investigation and Dec. 30 in Clinical Cancer Research, Weill Cornell Medicine scientists discovered that the tumor microenvironment recruits immune cells from bone marrow that normally play an important role in repairing and regenerating tissues. The team found that these cells play a critical role transforming tumors into high-grade glioblastomas. The team then identified a distinctive therapeutic target to halt this recruitment and prevent tumor growth.

“The reason our studies are unique is that we’re looking at the glioma a couple of steps before the malignant state,” said senior author Dr. Jeffrey Greenfield, an associate professor of neurological surgery and of neurological surgery in pediatrics at Weill Cornell Medicine, and a neurological surgeon at NewYork-Presbyterian/Weill Cornell Medical Center. “As a neurosurgeon I didn’t want to keep seeing incurable tumors in the operating room. Therefore, as a neuroscientist I decided to ask: ‘How can we predict which tumors will become more aggressive, and how can we intervene before it’s too late and the tumor becomes incurable?’”

The body’s immune system normally functions to fight off infection, but with glioblastoma, the tumors are able to turn the immune system against itself. In the Journal of Clinical Investigation study, the investigators discovered molecular communication between the low-grade tumors and the immune cells, called bone marrow-derived immune cells (BMDCs), which play a crucial role in the development of blood vessels. This communication reprograms BMDCs to support cancer development, the investigators found, instructing them to leave the bone marrow and travel through the bloodstream to the tumor’s microenvironment. 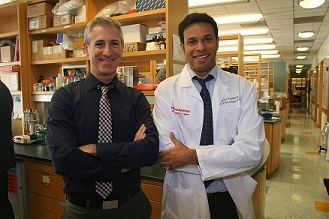 The team then developed a blood test to detect BMDCs, theorizing that an overabundance of immune cells in the bloodstream may indicate increased cell-recruitment activity. They used their assay in mice with glioblastoma and found higher levels of BMDCs in the bloodstreams of rodents whose tumors were progressing to high-grade or had already become malignant. The investigators say their findings demonstrate a new method to predict which tumors are most likely to progress and provide a more accurate prognosis (the current diagnostic standard is an MRI and tumor biopsy).

“Essentially you can take patients who look the same clinically or whose MRI scans look identical,” Dr. Greenfield said. “With this data we believe that we can predict who will progress to more aggressive disease within a shorter time frame.”

To validate this finding, the investigators in the Clinical Cancer Research study tested blood samples taken from mice with brain tumors as well as those from human patients with low and high-grade tumors, and non-tumor controls. They found an increase in BMDC production in the bone marrow and the bloodstreams of both mice and humans as the tumors progressed from low to high grade. Interestingly, rodent tumor samples also revealed a 30-fold increase of BMDCs in the actual microenvironment of the tumors between these stages.

“Our findings suggest that many of these bone marrow-derived cells may contribute to the creation of new blood vessels that support tumor growth,” said lead author Dr. Prajwal Rajappa, a fellow in neurological surgery at Weill Cornell Medicine. “Subsequent to our initial findings, our aim was to impair the recruitment of BMDCs to the tumor.”

To accomplish this, the investigators identified a cellular pathway called JAK/STAT3 that plays an important role in BMDC production and potentially in their recruitment into the tumor microenvironment. Using a JAK 1/2 inhibitor, the researchers found in mice that they could prevent the recruitment of BMDCs to the tumor site—thereby stymying malignant transformation. Mice that received the treatment lived significantly longer than those that did not.

This opens the possibility of moving forward with human clinical trials using a U.S. Food and Drug Administration-approved drug that targets the JAK/STAT3 pathway.

“If we intervene at an early stage with these tumors, we have a chance of turning this basic science progress into a clinical success reminiscent of how the script was flipped with HIV: a fatal disease turned into a chronic disease. We are hoping to keep pushing this until we can tell the story where one lives with a brain tumor that indefinitely remains benign,” Dr. Greenfield said. “With suppressive therapy, a patient could theoretically turn a prognosis of 17 months into one of 17 years.”