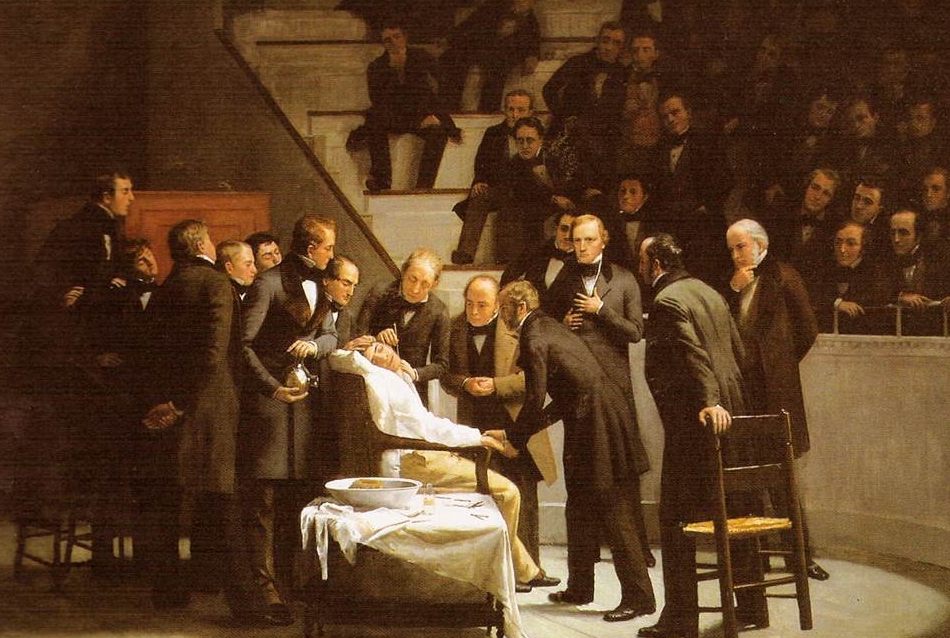 Painting from Robert Cutler Hinckley, "The First Operation with Ether,” depicting the first successful public demonstration of ether at Massachusetts General Hospital, which took place in 1846 in the “Ether Dome.”

Anesthesia induces unconsciousness by changing the function of proteins that reside on the surface of a thin membrane that forms a barrier around all cells, according to new research from Weill Cornell Medicine scientists. The findings challenge a century-old concept of how anesthetics work, and may help guide the development of new agents associated with fewer side effects.

In the study, published March 6 in the Proceedings of the National Academy of Sciences, researchers demonstrated that general anesthetics at clinically relevant concentrations do not affect the properties of the part of cellular membranes composed of fat, called the lipid bilayer, contrary to previous ideas. Their discovery strongly supports a more modern hypothesis that anesthesia interacts directly with membrane proteins — rather than indirectly through the membrane itself — to inhibit the electrical communications between neurons, triggering unconsciousness.

“We have debunked a century-old hypothesis and finally have proof that these anesthetics must have a direct effect on integral membrane proteins — and not an indirect effect on proteins through the lipid bilayer — to put patients in a coma-like state, allowing them to undergo painful procedures with no memory or pain,” said co-senior author Dr. Hugh Hemmings, chair of the Department of Anesthesiology at Weill Cornell Medicine.

Since the first successful use of ether to induce unconsciousness for surgery in 1846, scientists have simultaneously hailed general anesthesia as one of the most important advances in medicine while also striving to understand how it exerts its desired clinical effects. Two 19th-century pharmacologists hypothesized that anesthetic potency correlates with drug solubility in fats; experiments in which they dissolved anesthetic agents into olive oil confirmed their suspicions. Their findings produced the prevailing scientific explanation for anesthesia that held sway for a century: General anesthetics work by altering lipid bilayer properties and disrupting neuronal function, leading to unconsciousness. By the 1970s, some investigators began challenging that dogma, suggesting that proteins are in fact anesthetics’ targets, and a vigorous controversy ensued.

“Over time, more and more studies suggested that anesthetics interact directly with proteins, in particular with those on the surface of the cell membrane such as ion channels, which are important for cell-to-cell communication,” said first author Dr. Karl Herold, a senior research associate in anesthesiology at Weill Cornell Medicine. “This protein theory contradicted the initial lipid based hypothesis, which stated that anesthetics affect neuronal function by changing properties of the cell membrane.”

To determine the precise biological mechanism behind anesthesia, the team tested 13 anesthetic agents using a technique developed by Dr. Olaf Andersen, a professor of physiology and biophysics at Weill Cornell Medicine, and Dr. Helgi Ingólfsson, Ph.D. ’10. They formed a “model cell” surrounded by the same thin membrane in which they had placed a reporter protein, the gramicidin channel. Inside the “cell” they placed a fluorescent dye that would send a visual signal in ions that moved through the channel. Because the movement of ions through the gramicidin channel is very sensitive to changes in bilayer properties, and has no sites where drugs can bind, they were able to measure whether anesthetics alter lipid bilayer properties by monitoring the signal of the fluorescent dye. None of the anesthetics, at clinically relevant concentrations, changed the ion movements through the channel, showing that none of them affected the lipid bilayer properties.

“That was a very surprising result,” said co-senior author Dr. Andersen. “When we started conducting the experiments I was convinced we would see some effect on the bilayer. The fact that the results are as clean as they are was to me really amazing.”

Interestingly, some anesthetics did modify the lipid bilayer, but only at concentrations much higher than clinically relevant. “This might explain some of the anesthetics’ dangerous side effects,” Dr. Herold said.

General anesthetics in current clinical use are several decades old, and pharmaceutical companies have come up short in developing new agents. These new findings should help guide future drug development by providing a screen for potentially undesirable direct lipid effects.