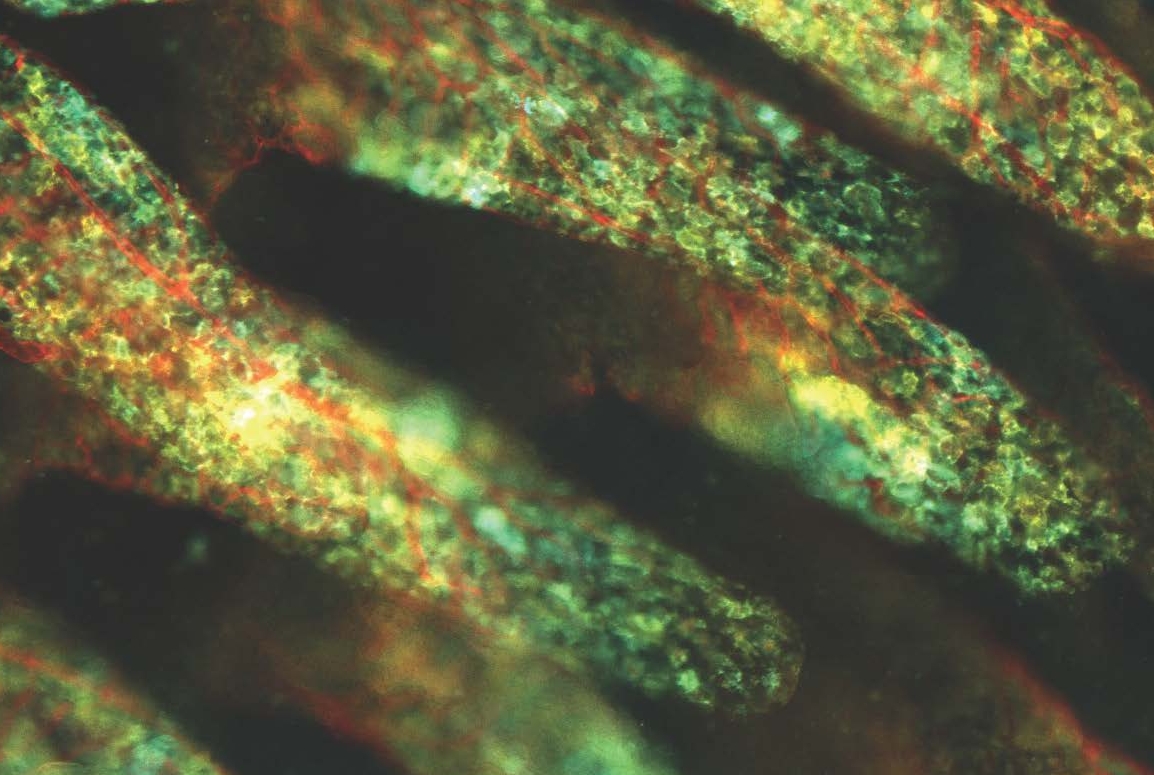 This image shows phagocytes within small, finger-like projections in the small intestine called villi. These phagocytes appear as a green-yellow network of cells among the red endothelial vasculature.  The small intestinal villi protrude into the gut lumen, increase the surface area of the intestinal epithelium, and aid in the absorption of nutrients.  The phagocytes are underneath a single cell layer of epithelial cells (not visualized) that face the lumen, forming a barrier between the phagocytes in a thin layer of loose connective tissue called the mucosa and the food and microbiota within the gut lumen. All images: J. Magarian Blander and Ryan Cummings

The natural lifecycle of cells that line the intestine is critical to preserving stable conditions in the gut, according to new research led by a Weill Cornell Medicine investigator. The findings may lead to the development of new therapies to alleviate inflammatory bowel disease (IBD) and other chronic inflammatory illnesses.

In the study, published Nov. 9 in Nature, the scientists investigated the healthy turnover of epithelial cells, which are born and die every four to five days, to better understand how the gut maintains a healthy equilibrium. Because cells, called phagocytes, can clear dying cells so quickly in the body, it had been difficult to study this process in tissues. The inability to clear dying cells has been linked to inflammation and autoimmunity. Dying epithelial cells are shed into the gut lumen, so their active clearance is not necessary and they were thought to have no role in intestinal inflammation.

The investigators sought to understand whether phagocytes can take up dying epithelial cells in the gut and, if so, how these phagocytes respond. Specifically, the study tried to ascertain which genes are expressed by phagocytes after the uptake of dead cells. To answer these questions, the scientists engineered a mouse model where they could turn on apoptosis and catch phagocytes in the act of sampling dying cells. Through a series of experiments, they found that several of the genes modulated up or down in phagocytes bearing dead cells overlapped with the same genes that have been associated with susceptibility to IBD. 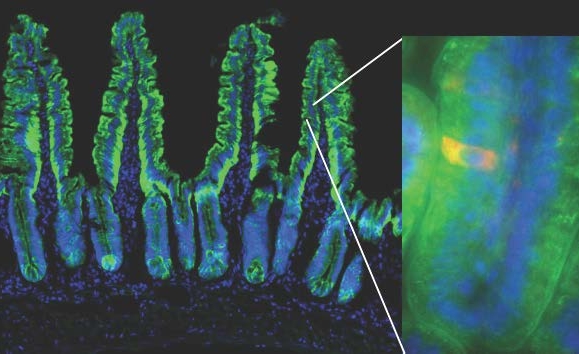 “The fact that there was an overlap shows that apoptosis must play a role in maintaining equilibrium in the gut,” said Dr. Julie Magarian Blander, a senior faculty member in the Jill Roberts Institute for Research in Inflammatory Bowel Disease at Weill Cornell Medicine who was recently recruited as a professor of immunology from Mount Sinai. “This study identified cell death within the epithelium as an important factor to consider when thinking about therapeutic strategies for patients with IBD.”

In their experiments, the scientists expressed a green fluorescent protein fused to the diphtheria toxin receptor within intestinal epithelial cells of mice, which made them visible under a microscope and sensitive to diphtheria toxin. They injected into these mice a carefully titrated dose of toxin into the intestinal walls of mice to induce cell death. Then the team examined the phagocytes that turned green after they internalized dead cells. Macrophages, one kind of phagocyte, expressed genes that help process the increased lipid and cholesterol load they acquired from dying cells. Dendritic cells, another type of phagocyte, activated genes responsible for instructing the development of regulatory CD4 T cells, a class of suppressive white blood cells. Notably, both phagocytes expressed a common ‘suppression of inflammation’ gene signature.

Because the same genes that confer susceptibility to IBD were modulated in response to apoptotic cell sampling, the research indicates that a disruption of the phagocytes’ immunosuppressive response would have consequences for homeostasis – or stable conditions – in the gut.

“We know there is excessive cell death, inflammation and microbial imbalance in IBD, so the prediction is that the immunosuppressive program in phagocytes, associated with natural cell death in the gut epithelium, would be disrupted,” Dr. Blander said. “The goal in the treatment of IBD is to enhance healing in the gut, but now we know that this also helps phagocytes restore their immunosuppressive and homeostatic functions. We think this would translate into helping patients stay in remission. There’s a lot to learn from phagocytes and we may be able to target the same pathways they use to suppress inflammation in patients with IBD.”

The study validates the importance of healing in the mucosa, or lining, of the intestine as a therapy and enhances the understanding of that process. The next phase of Dr. Blander’s research will be to investigate how the inflammatory conditions of IBD alter cell death and the homeostatic immunosuppressive functions of intestinal phagocytes, and to do so in both mouse models and different groups of IBD patients undergoing anti-TNF therapy at the Jill Roberts Center for Inflammatory Bowel Disease at New York-Presbyterian and Weill Cornell Medicine.