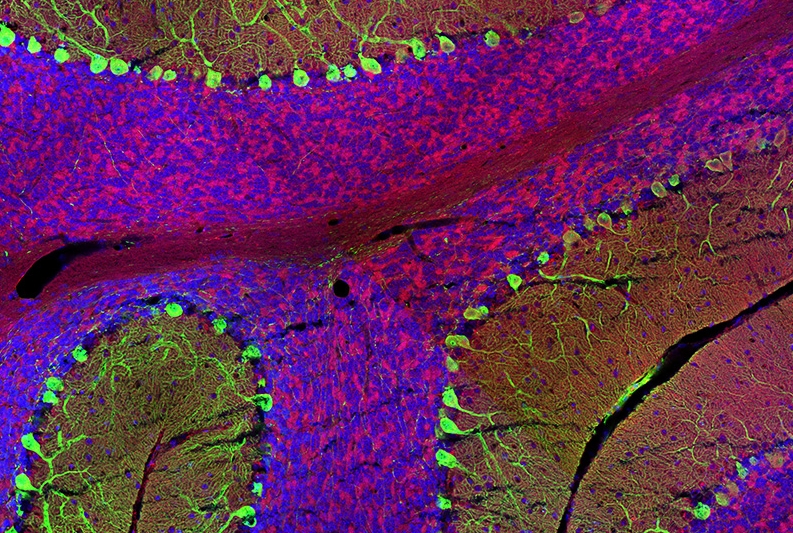 This is an image of a brain slice illustrating Glut4 in all of the main brain layers in the cerebellum. Image credit: Dr. Ghazal Ashrafi, courtesy of Neuron.

New research provides insights into why the brain is so reliant on sugar to function.

In a study published Jan. 19 in Neuron, a research team led by Weill Cornell Medicine investigators discovered that brain cells recruit a specific sugar, glucose, to fuel the transmission of electrical signals that enable people to think, breathe and walk. The findings suggest that the brain uses the same process to produce energy on demand as muscles do during exercise, and raises a puzzling question of how the glucose-regulating hormone insulin affects brain function.

“We are at the beginning of understanding how brain cells are using fuel and how they try to regulate what fuel is for, which is making ATP,” said the study’s senior researcher Dr. Timothy A. Ryan, a professor of biochemistry at Weill Cornell Medicine. “This study is central because it goes to the fundamentals of how neurons deal with processing glucose versus potentially other ways of powering themselves.”

Scientists have long known that depriving neurons of glucose can lead to impaired brain function. Too much insulin can cause blood glucose levels to drop too far too fast, resulting in seizures and diabetic coma. Ischemic stroke terminates blood flow to the brain, depriving brain cells of the glucose and oxygen they need to function properly. But the biochemical mechanism explaining why the brain is so vulnerable to glucose deprivation remained unclear.

In their study, the researchers found that “exercising” synapses regulate production of ATP by putting more copies of a molecule called Glut4 on their surfaces to take up additional glucose in response to activity. Glut4 plays an important role in regulating glucose levels in the body. Insulin, for example, triggers Glut4 after a meal to mobilize to the surface of fat and muscle cells, signaling them to store excess glucose released after digesting food. Glut4 also goes to the surface of exercising muscle cells, where glucose is converted to ATP to help power the muscle.

“We discovered that synapses are a lot like exercising muscle,” Dr. Ryan said. “‘Exercising synapses,’ or active synapses, mobilize glucose transporters and put them on the surface of the synaptic membrane so that the synapse will take up more glucose in response to activity and, in turn, then use the glucose to power the synapse.”

Dr. Ryan, first author Dr. Ghazal Ashrafi and their colleagues determined that the vulnerable point in synapse function was in a process called endocytosis, which is necessary to rebuild synaptic vesicles after they release a neurotransmitter. When neurons are starved of glucose, they can no longer remake synaptic vesicles after their use and synaptic transmission begins to shut down.

Using a Glut4 that was engineered to have a tag on it — allowing the researchers to tell when it is on the surface of the neuron or being stored inside the cell — Dr. Ryan’s team discovered that as synapses begin to do work, they activate an enzyme to trigger the insertion or more copies of Glut4 on the cell surface. The enzyme, AMP-activated kinase (AMPK), acts as a metabolic sensor in many types of cells in the body to monitor subtle changes in energy balance. The same enzyme detects the energy imbalance in a muscle cell that exercises where its activation also leads to the insertion of Glut4 onto the muscle cell surface. Eliminating Glut4 from neurons through genetic engineering led to synapses that act like they are starved of sugar and unable to sustain synapse function for more than a few seconds of activity. Since cognitive function relies on the ability of synapses to continuously function, these discoveries highlight the fact that synapses are under strict metabolic control, Dr. Ryan said.

The findings, Dr. Ryan said, may explain how eliminating sugar from meals and snacks — the so-called ketogenic diet — prevents seizures in children with a drug-resistant form of epilepsy. The spread of a seizure relies on high-frequency firing of synapses, which leads one synapse to activate another, cascading throughout the brain’s circuitry. Keeping sugar levels low may prevent synapses from being able to perform optimally, in turn protecting the brain against seizures, he said.

While scientists have known that insulin is found in the brain, what it does there is not understood. Dr. Ryan and his colleagues are now working on understanding how insulin control of Glut4 in the brain affects how neurons work.