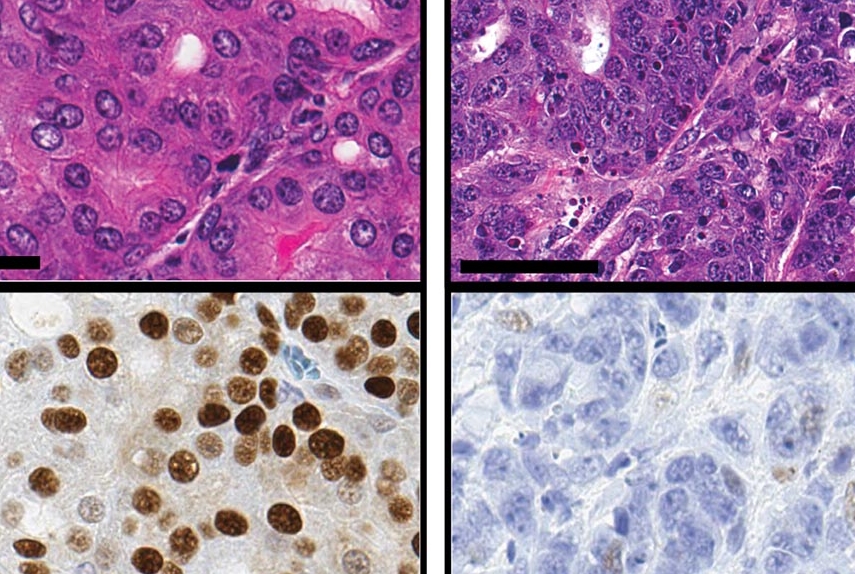 Photomicrograph images of a tumor region (left top and bottom) showing a common form of prostate cancer (adenocarcinoma) and another tumor region (right top and bottom) showing a lethal form of prostate cancer (neuroendocrine prostate cancer) from a mouse genetically engineered to over-express the gene N-Myc in the prostate. The common form expresses the hormone receptor protein known as the androgen receptor (brown nuclei, left bottom) whereas the lethal form does not express the androgen receptor.

An overactive gene appears to cause some prostate cancers to transform from a typical tumor type to a much more aggressive form of the disease, according to new research at Weill Cornell Medicine.

Prostate cancer is the second most common cancer in men, behind skin cancer. Approximately 15 percent of men in the United States will be diagnosed with the disease at some point in their lives. Most prostate cancers are a type called adenocarcinoma, which develops in the gland cells in the prostate. These cancers are regulated by male hormones called androgens. Advanced adenocarcinoma of the prostate is treated with drugs that cut off the supply of androgens. This is typically effective in slowing the growth of the cancer, but these tumors are increasingly becoming resistant to androgen-blocking treatment and progressing to a more aggressive disease called neuroendocrine prostate cancer.

"The neuroendocrine type of prostate cancer is much more aggressive, with a much shorter survival time compared to prostate adenocarcinoma," said Dr. David Rickman, an assistant professor of pathology and laboratory medicine at Weill Cornell Medicine. "And it is becoming increasingly recognized. There is a huge clinical need to figure out what drives its development so that we can figure out how to best treat it."

In a paper published Oct. 10 in Cancer Cell, Dr. Rickman, along with colleagues at Weill Cornell Medicine, the University of Trento in Italy, Memorial Sloan Kettering Cancer Center, and the University of Würzburg in Germany, has identified a gene that appears to regulate the change from prostate adenocarcinoma to neuroendocrine prostate cancer. This gene, called N-Myc, is not typically found in prostate cancers, but is known to drive some other cancers, including neuroblastoma, a rare cancer of the nervous system that occurs in children.

The researchers studied N-Myc in mice and in samples of tumors from patients. When they caused the gene to overexpress, or become overactive in the mouse prostates, prostate adenocarcinoma progressed to neuroendocrine prostate cancer. In addition, they found that N-Myc recruits a protein called EZH2, which participates in the change to more aggressive cancer. Together, N-Myc and EZH2 shut off the tumor's androgen signaling and turns on the molecular program associated with neuroendocrine prostate cancer. "This makes the cancer impervious to androgen-blocking drugs," Dr. Rickman said. "The cancer has found a way to work around the medications designed to destroy it."

The findings may help investigators find a more effective way to treat advanced prostate cancers. In particular, drugs that target the protein EZH2 — currently in clinical trials to treat other cancers — could be studied for their use in prostate cancer. "We found that if we block EZH2 in our models, we also block N-Myc's ability to drive prostate cancer growth toward this more dangerous cancer subtype," Dr. Rickman said. "These findings give us an exciting new direction in treating this cancer."

The Prostate Cancer Foundation supported the study through a Janssen-PCF Challenge Award, which funds research conducted by cross-disciplinary teams.

"This is game changing discovery in our field," said Dr. Jonathan W. Simons, president and CEO of the Prostate Cancer Foundation. "By identifying new molecular drivers of the most aggressive forms of prostate cancer, we can enable new strategies for targeted pharmacology research and development that could lead to durable remissions. Through development of new NEPC models, Dr. Rickman and his team have identified a population of patients that may respond to a new investigational treatment."