Dr. Olga Boudker's Work with Glutamate Pumps Earns her Membership in an Elite Cadre of Investigators 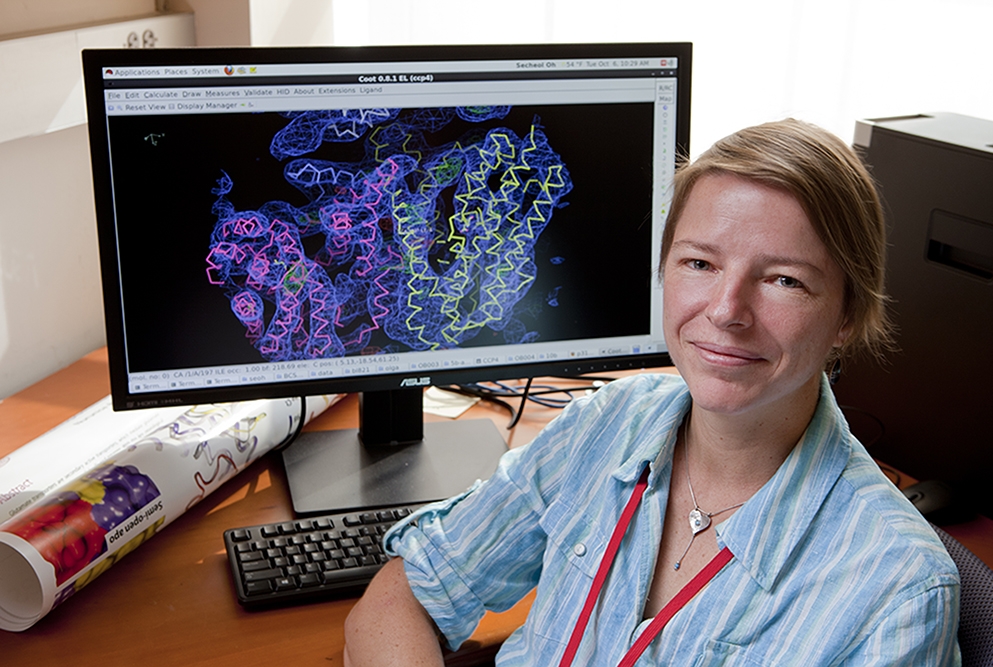 When a scientist is named a Howard Hughes Medical Institute investigator, he or she joins the ranks of the most renowned biomedical researchers in the United States. These 330 or so explorers and innovators — among them 182 National Academy of Science members and 24 Nobel laureates — work to answer essential questions about such topics as how stem cells renew, how genes affect behavior, and how bacteria communicate with each other. It's an honor that carries five years of unrestricted research support; in 2014 alone, Howard Hughes Medical Institute investigators received $706 million.

In May, Dr. Olga Boudker, associate professor of physiology and biophysics, joined this elite group. One of just 26 new investigators chosen from a pool of about 900 applicants, she began her term in September.

The focus of Dr. Boudker's work is a molecular machine called a glutamate pump, which she calls her "love and professional life." Although it's 100 million times smaller than a human being, it's incredibly important, responsible for enabling healthy communication in the brain. Located on each cell's surface, or membrane, glutamate pumps use an elevator-like process to scoop up and move the brain's most common neurotransmitter — glutamate — from the outside to the inside of each cell. This process allows neurons to talk to each other and enables cognition and memory. But if it goes awry, glutamate languishes in the synapses between brain cells and quickly becomes toxic, resulting in seizures or neuropathic pain (a sensation somewhere in the body unrelated to any specific injury). If someone experiences a brain injury or stroke, it's the leftover glutamate spilling throughout the region that continues to kill neural cells and spread trauma.

The Russian-born, third-generation scientist has spent the last 14 years working to understand how these machines function. Dr. Boudker and her team were the first to use X-ray crystallography to capture atomic resolution snapshots of glutamate pumps as they work; thanks to collaborations with Dr. Scott Blanchard, associate director of the Tri-Institutional Chemical Biology Program, she was also the first to use fluorescent techniques to see how the elevator mechanism operates in real time.

As Dr. Boudker describes it, this depth of knowledge makes her a mechanic of sorts. While a car mechanic must possess a deep understanding of how each part of a vehicle work s — how the pistons are moving and wheels are spinning — Dr. Boudker is developing a similar level of understanding about how a molecular machine functions. And just as a mechanic needs that intimate knowledge to fix a car, Dr. Boudker's findings may one day help researchers craft new strategies to treat stroke, traumatic brain injury, and neurodegenerative diseases, and to develop drugs that can improve or fix broken pumps. "With this award, I've been given an opportunity that every scientist wants to have, but not very many get," says Dr. Boudker, one of three current Howard Hughes Medical Institute investigators affiliated with Cornell University. "I have carte blanche to pursue any type of research that I'd like, and I'll have HHMI's support no matter what I choose. The question is how to take the best advantage of this opportunity."

That means spurring understanding of how to make molecular machines work faster and more efficiently, or to fix them when they're broken. Dr. Boudker describes herself as exploring "uncharted territory." Among the outstanding questions in the field are how to apply her findings on how glutamate pumps work to another molecular machine that resides on the cell membrane; how to better understand how the pumps function so they might be pharmacologically activated down the road; and how they work in tandem with other molecular machines within cell membranes, focusing on the system as a whole.

While the importance of taking full advantage of the Howard Hughes Medical Investigator award weighs heavily on Dr. Boudker's mind, the scientist who recruited her to Weill Cornell Medicine is nothing but confident in her abilities. "Dr. Boudker is a deep thinker and also a risk taker — a rare combination in science that can lead to spectacular results," says Dr. Harel Weinstein, the Maxwell M. Upson Professor of Physiology and Biophysics and chair of the department. "Others might shy away from the type of multidisciplinary experiments that she favors because they might not work. But her approach, which combines crystallography and dynamic biology, gives her an enormous advantage."

For her part, Dr. Boudker describes her approach as less about taking risks than breaking each experiment down into small, manageable parts. She compares it to writing a book: if authors considered the enormity of the task, they might never set pen to paper. But if they don't worry about the end result, they can take pleasure in the journey. "You hope that if you put in good work, something good will eventually come out," Dr. Boudker says. "It might not go as you originally thought, but hopefully you will reach some other goal."