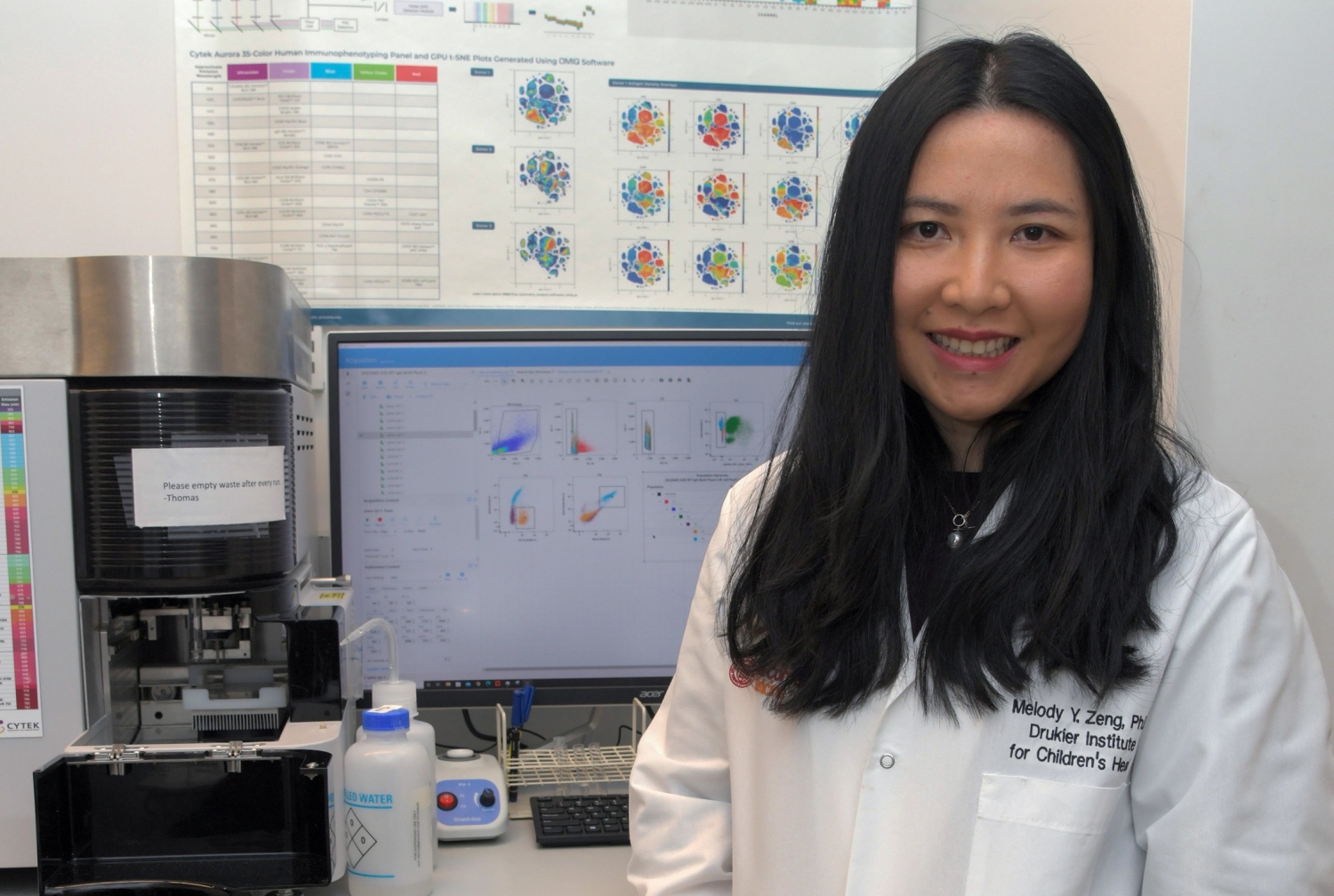 Dr. Melody Zeng, an assistant professor of immunology in pediatrics and a member of the Gale and Ira Drukier Institute for Children’s Research at Weill Cornell Medicine, has received a 2021 Hartwell Individual Biomedical Research Award from The Hartwell Foundation. The award provides support for three years at $100,000 direct cost per year and designation as a Hartwell Investigator.

Dr. Zeng’s award will support her research into the connection between gut bacteria in infants and an increased risk of developing autism spectrum disorder (ASD) after exposure to maternal antidepressants. The incidence of ASD continues to rise, with the latest estimates showing about 1 in 44 children have been identified with ASD by the age of eight years, according to the Centers for Disease Control and Prevention. ASD causes differences in the brain and typically begins before the age of 3. Patients experience a wide variety and severity of symptoms, which may include problems with social interaction and communication, repetitive behaviors, different ways of moving or paying attention and intellectual disability.

“I am excited and honored to receive a Hartwell Award, as it will be instrumental in advancing my early-stage research,” Dr. Zeng said. “Ultimately, I hope new understandings of the link between gut bacteria and an increased risk of ASD in infants exposed to maternal antidepressants may help us identify potential treatment targets for reversing the adverse effects and lowering the risk for children.”

Scientists believe multiple factors contribute to the development of ASD. Recent studies have found a link between gut bacteria and ASD onset, but the underlying mechanisms are not well understood. Evidence has shown that more than 25 percent of children identified with ASD have high blood levels of serotonin, a chemical transmitter produced by gut bacteria in the intestine that plays a role in signal transmission between nerve cells throughout the brain and body. Previously, serotonin production processes were assumed to be the same in adults and babies. Dr. Zeng is among the first researchers to show that babies have much higher serotonin levels in their stool during early developmental stages than adults.

Antidepressants aim to alleviate depression and anxiety by raising serotonin levels in the brain. Their use has greatly increased during pregnancy over the last few decades, and there appears to be a link to ASD. Reports show that infants of mothers who took antidepressants during pregnancy or while breastfeeding had a 60 percent greater risk of developing ASD than infants whose mothers did not take the medications.

“Based on our preliminary findings, we think that maternal antidepressant use during pregnancy and breastfeeding may alter the levels of serotonin in infants, potentially leading to brain inflammation and an increased risk of ASD onset,” said Dr. Zeng. She and her team will investigate how gut bacteria control serotonin production processes using human infant stool samples and mouse models of maternal antidepressant use. Dr. Zeng has been building a biobank of human neonatal stool samples from infants admitted to the Neonatal Intensive Care Unit or the Well-Baby Nursery at NewYork-Presbyterian/Weill Cornell Medical Center in collaboration with Dr. Jeffrey Perlman, professor of pediatrics at Weill Cornell Medicine. Dr. Zeng is also collaborating with Dr. Virginia Pascual, the Drukier Director of the Drukier Institute for Children’s Health at Weill Cornell Medicine, on using single-cell RNA sequencing to analyze immune cells in the brains of mice transplanted with stool bacteria from infants that have and have not been exposed to maternal antidepressants.

The Hartwell Foundation has funded early-stage biomedical research with the potential to benefit children in the United States since 2006. Hartwell Individual Biomedical Research Awards are awarded annually to a limited number of researchers conducting early-stage, cutting-edge research with the potential to benefit the health of American children and have not yet been funded by other sources. Dr. Zeng is one of 10 awardees selected from eight institutions by the Hartwell Foundation in 2021.

Dr. Zeng’s Individual Biomedical Research Award qualifies Weill Cornell Medicine to designate a Hartwell Fellowship to fund one postdoctoral candidate in an early stage of their career. The fellowship funded by The Hartwell Foundation provides $50,000 direct cost per year for two years in support of specialized training in biomedical research.