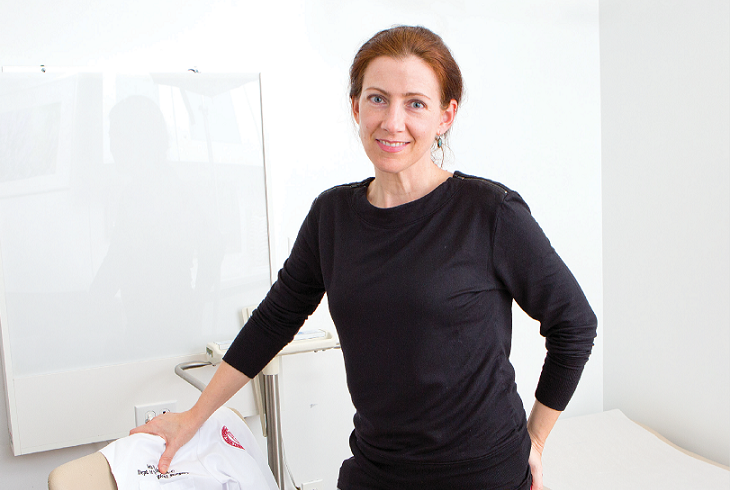 Apart from being a neurosurgery physician assistant at NewYork-Presbyterian/Weill Cornell Medical Center, my primary responsibility for several years was taking care of my father, Eddie, managing his medications and the symptoms of his Parkinson’s disease. It was a difficult and trying few years for my family, but mostly for my dad, and in March 2019 he passed away. We decided to take his ashes home to bury in the family grave in County Galway, Ireland, and to celebrate his life with our family there. On the flight back to New York after a difficult weekend—which included visiting a cousin who lost her husband on Mount Everest while expecting their second child—there was an announcement for doctors to make themselves known to the flight crew. My siblings all looked at me, and I looked around for airline staff to see if I could be of service, but didn’t see anyone. There was a crowd in the aisle about 15 rows in front of mine, and I went up there.

I saw an unresponsive man lying in the aisle with a fellow passenger attempting to push on his chest while someone else was feeling around on his neck. I told them to stop while I checked for a pulse. There was none, so I started compressions, breaking ribs around the third compression (not a pleasant experience, and one I still feel to this day). I shouted for anyone who was trained, willing and able to assist in CPR to step up. A nearby man was willing to give mouth-to-mouth, and after having him reposition a few times to ensure chest rise—that the lungs were filling with air—we started a cycle of thirty compressions and two breaths. In my head I kept hearing Larry Wheeler, my amazing CPR instructor at NewYork-Presbyterian: “allow for chest recoil”; “ensure chest rise”; “you can’t hurt him, he’s dead!”

A flight attendant said he could help with compressions, so I rotated with him, which allowed me to relieve the other passenger giving mouth-to-mouth when needed. I told the crew that we needed to land as soon as possible, expecting we would divert to Boston or Albany, as we had been over northeast Canada when this all started. I kept asking the crew for their medical kit; I was wondering if I’d have to intubate him in the aisle and administer epinephrine (a medication that can restart the heart during cardiac arrest). But they were unable to provide anything more than an ambu-bag (a mask and bag combo that allows you to deliver oxygen without doing mouth to mouth), a piece of tubing and an oxygen tank that didn’t connect to the ambu-bag.

At one point, we were unable to move air into his lungs because of saliva pooling in his throat. Fearing he would aspirate, I used the tubing as a straw to clear his airway. We resumed CPR and after multiple cycles and about three shocks with an automated external defibrillator (AED), which another female passenger helped to use and monitor, we got return of spontaneous circulation (ROSC). The man resumed consciousness and was able to tell me where in Ireland he was from. He then went into ventricular fibrillation (a potentially deadly cardiac arrhythmia) and we resumed CPR. We delivered about four more AED shocks and got ROSC again; we had been doing CPR on him for about 40 minutes at this stage. He was speaking, answering questions and following commands.

We braced for landing, with the patient still on the floor and me beside him. EMS was waiting for us on the ground and took him straight to the hospital, awake, alert and oriented. (It turned out we had not diverted and ended up in our original destination, Stewart International Airport in the Hudson Valley.) My hastily assembled crew of volunteer life-savers sat back in disbelief and disarray—I was drenched in sweat and had rug burns on my knees; two days later my abs would be killing me!—amazed that we had somehow come together in the narrow confines of an airplane aisle to bring a man back to life. My dad and cousin-in-law were certainly there with us that day.

As a healthcare provider I responded to this man’s emergency reflexively, but many people have since asked me what obligation I had to get involved. I feel that while there is no legal obligation to act in a medical emergency of this sort, there is an ethical one that stems from the Hippocratic Oath we take. Intervening in an out-of-hospital medical emergency can be extremely challenging. Given the low likelihood of surviving a heart attack outside the hospital, I am grateful I was able to apply my medical knowledge and training that day and that we had a good outcome. The Good Samaritan Law also helps providers responding to an emergency by protecting them from potential liability. I hope that our experience inspires others to take CPR training, and that they encourage their family and friends to do the same. I realize that the outcome would have been different during the pandemic, given concern for infection and the risk of viral transmission during chest compressions—and I am grateful we didn’t face those circumstances. A CPR mask could help prevent infection, and compression-only CPR—recommended by the American Heart Association during COVID—is better than no intervention in the right circumstances. Scene safety is the first rule in these situations, and protecting the health of everyone on that flight would be considered part of that.

The man we helped tracked me down two months later, and I learned that he had suffered a massive heart attack and required two stents. He lives in the United States, runs his own business and is a single father to a teenage daughter. His mother had passed away, and he had been home in County Wexford for the Blessing of the Graves; his mother was certainly there with us that day as well. He and I and the woman who managed the AED, along with my partner and mother, met for lunch in August 2019 and could not believe the coincidences and events that led us to be on the same flight. He has also tracked down the passenger who did most of the mouth-to-mouth, an Irishman who’d been on holiday with his family.

The next time that passenger returns to the States, we all plan to reunite under better circumstances. Our reunion has been delayed due to COVID, but I spoke with my patient on the anniversary of his cardiac arrest—his “re-birthday,” as his daughter and I have taken to calling it—and we look forward to getting together in 2021.