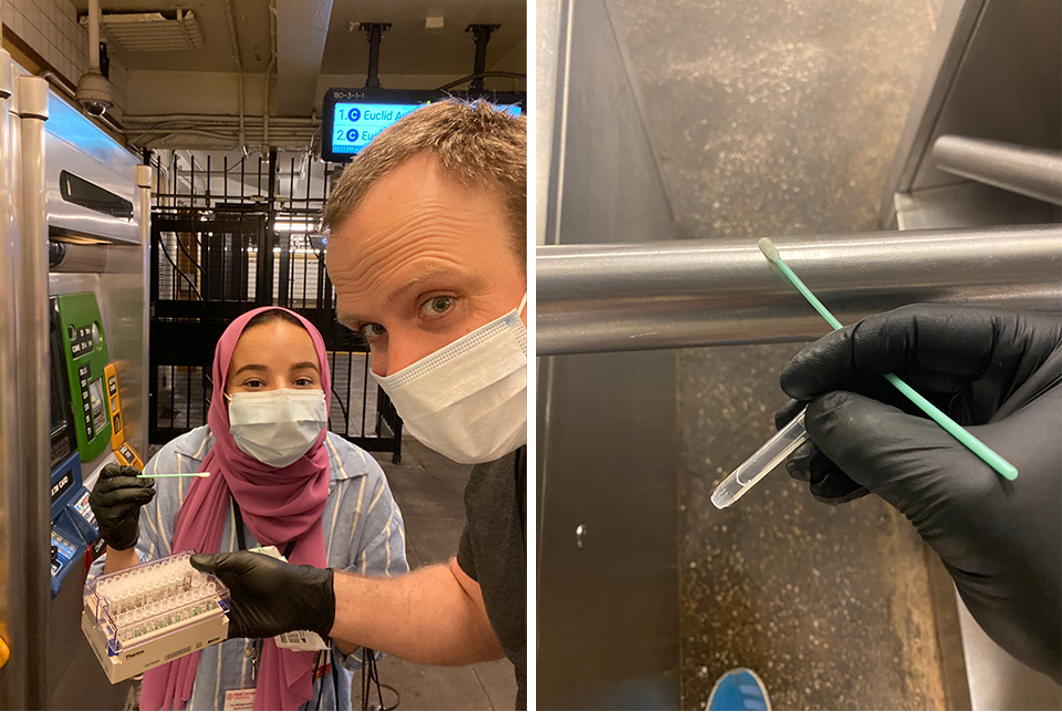 NEW YORK (May 26, 2021) — About 12,000 bacteria and viruses collected in a sampling from public transit systems and hospitals around the world from 2015 to 2017 had never before been identified, according to a study by the International MetaSUB Consortium, a global effort at tracking microbes that is led by Weill Cornell Medicine investigators.

For the study, published May 26 in Cell, international investigators collected nearly 5,000 samples over a three-year period across 60 cities in 32 countries and six continents. The investigators analyzed the samples using a genomic sequencing technique called shotgun sequencing to detect the presence of various microbes, including bacteria, archaea (single-celled organisms that are distinct from bacteria), and viruses that use DNA as their genetic material. (Other types of viruses that use RNA as their genetic material, such as SARS-CoV-2, the virus that causes COVID-19, would not have been detected with the DNA analysis methods used in this pre-pandemic study.)

This field of research has important implications for detecting outbreaks of both known and unknown infections and for studying the prevalence of antibiotic-resistant microbes in different urban environments.

“Every time you sit down in the subway, you are likely commuting with an entirely new species,” said senior author Dr. Christopher Mason, co-director of the WorldQuant Initiative for Quantitative Prediction and a professor of physiology and biophysics at Weill Cornell Medicine. Dr. Mason is also co-founder and a paid consultant of Biotia and Onegevity Health, and a paid speaker for WorldQuant LLC.

The current study led to the discovery of 10,928 viruses and 748 bacteria that are not present in any reference databases.

Dr. Mason founded MetaSUB (short for Metagenomics and Metadesign of Subways and Urban Biomes) in 2015, along with Dr. Evan Afshin, who was then an undergraduate student at Macaulay Honors College at Queens College and is now a clinical fellow in physiology and biophysics at Weill Cornell Medicine and a paid consultant for Onegevity Health. The newly released study was led by Drs. Mason, David Danko, a Weill Cornell Graduate School doctoral student in Dr. Mason’s lab during the study, and Daniela Bezdan, who was a research associate in computational biomedicine at Weill Cornell Medicine at that time.

By collecting samples of microbes and analyzing their genes—collectively known as the microbiome—the researchers hope to learn more about the bacteria, viruses and other microorganisms that live among humans. For example, the research may help to identify the emergence of antibiotic-resistant strains. Predicting antibiotic resistance from genetic sequences alone is challenging, but the researchers were able to map some genes known to be linked to resistance, quantify their abundance and confirm the genetic markers’ ability to confer resistance. They found that some cities had more resistance genes than others, and that there might be city-specific signatures for some of these genes.

Antimicrobial resistance remains a major global health challenge. “While further research is needed, this dataset demonstrates the value and potential for microbiome mapping and monitoring, and the insights it can provide physicians, scientists and public health officials,” Dr. Afshin said.

Moreover, learning about the small molecules and proteins made by microbes could also lead to the discovery of new antibiotics as well as other molecules that have the potential to be developed as drugs. Many antibiotics and drugs that are currently in use have been derived from microbial sources. Discoveries made about new microbial species could also lead to new laboratory tools and approaches, such as novel ways to use the molecular editing tool known as CRISPR. In this study, the researchers found 838,532 novel CRISPR arrays—snippets of viral DNA found inside bacteria—and 4.3 million new peptides (small proteins).

Due to these sampling efforts, Dr. Mason said that he can predict with about 90 percent accuracy where a person lives, just by sequencing the DNA on their shoes. Many factors were found to influence a city’s microbiome, including overall population and population density, elevation, proximity to the ocean and climate. The findings about these distinct signatures could enable future forensic studies.

“A microbiome contains molecular echoes of the place where it was collected. A coastal sample may contain salt-loving microbes while a sample from a densely populated city may show striking biodiversity,” Dr. Danko said.

Drs. Mason and Afshin began collecting and analyzing microbial samples in the New York City subway system in 2013. After they published their first findings, dubbed PathoMap, they were contacted by researchers from around the world who wanted to do similar studies for their own cities. The international interest inspired Dr. Mason’s lab to create MetaSUB and he recruited Daniela Bezdan as the research director. “We needed internationally accepted protocols, logistics and collaboration agreements with scientists, vendors, government offices and philanthropic foundations for potentially 100 cities in 20 countries,” Bezdan said.

Today MetaSUB continues to grow and has expanded to collecting RNA and DNA samples from air, water and sewage, in addition to hard surfaces. This has led to a $5 million grant on wastewater sequencing and viral tracking across three states (Florida, New York and Wisconsin), and which is part of the Centers for Disease Control and Prevention’s new National Wastewater Surveillance System (NWSS).

The group also oversees projects such as Global City Sampling Day (gCSD), held every year on June 21, and has done wide-ranging studies including a comprehensive microbial analysis of Rio de Janeiro before, during and after the 2016 Summer Olympics. Many of the samples analyzed in the current study were collected on Global City Sampling Day in 2016 and 2017. The New York City sampling effort was conducted with support from the Weill Cornell Medicine Clinical and Translational Science Center (CTSC), in collaboration with senior CTSC program manager Jeff Zhu. Dr. Mason and his colleagues are currently preparing for this year’s event.

“When we started in 2015, the consortium consisted of 16 cities; six years later we have more than 100 cities. It’s great to have this group of curious, self-starting and enthusiastic co-investigators,” said Dr. Mason, who is also professor of computational genomics in computational biomedicine in the HRH Prince Alwaleed Bin Talal Bin Abdulaziz Al-Saud Institute for Computational Biomedicine at Weill Cornell Medicine.

“Although samples are collected all over the world, much of the analysis is done right here in New York City at Weill Cornell Medicine,” said Dr. Mason. The analysis and assemblage of sequences also leveraged Bridges and Bridges-2, Extreme Science and Engineering Discovery Environment (XSEDE) supercomputers at the Pittsburgh Supercomputing Center. MetaSUB researchers in Switzerland (Drs. Andre Kahles and Gunnar Rätsch) used these assemblies and raw data to build a searchable, global DNA sequence portal (MetaGraph) that indexed all known genetic sequences (including MetaSUB data). The portal maps any known or newly discovered genetic elements to their location on Earth and can aid in the discovery of new microbial interactions and putative functions.

DNA isolation from samples were largely performed with support from Zymo Research and Promega, and sequenced in collaboration with Dr. Shawn Levy at the HudsonAlpha Institute for Biotechnology, Dr. Klas Udekwu from Stockholm University and the New York Genome Center. Future and ongoing studies will look at RNA and DNA with long reads and spatial-imaging methods, as well as trace the metabolites from the global sites, and continue to update the planetary-scale genetic map. 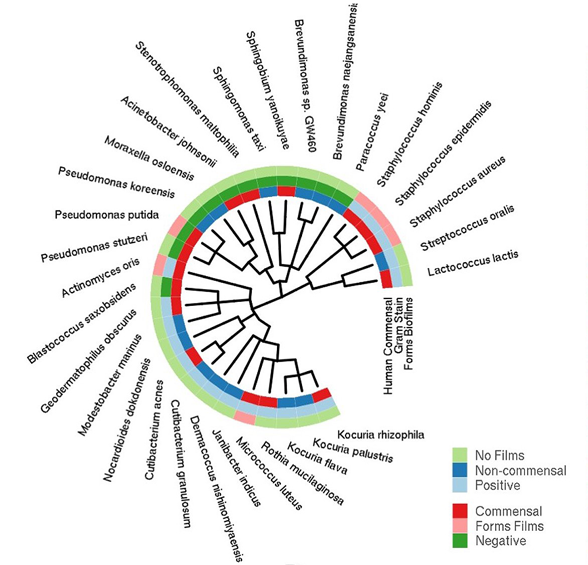 The core microbiome. Taxonomic tree showing 31 core taxa, colored by phylum and annotated according to gram stain, ability to form biofilms, predicted association with a virus, and whether the bacteria is a human commensal species. Image courtesy of Cell Press.