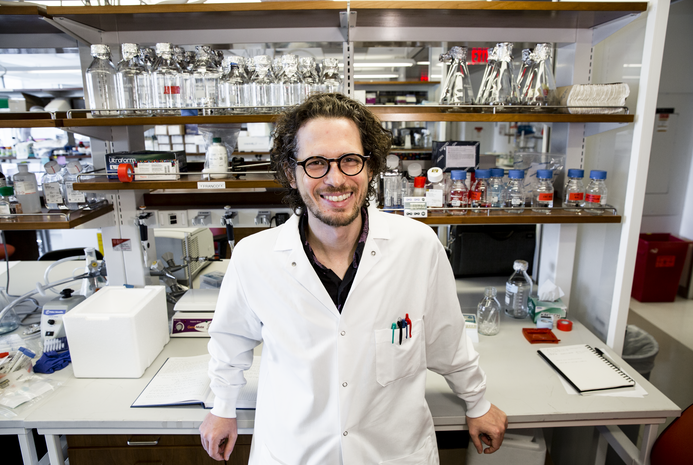 Dr. Dan Landau, an associate professor of medicine and a member of the Sandra and Edward Meyer Cancer Center at Weill Cornell Medicine, has been awarded a four-year, $600,000 Distinguished Scientist grant by the Sontag Foundation to study the diversity of cell types within brain cancers called gliomas.

The Sontag Foundation was established by Florida-based businessman and philanthropist Rick Sontag and his wife, brain-cancer survivor Susan Sontag, in 2002. Each year it awards between two and five Distinguished Scientist grants to early career scientists who have the potential to increase survival rates, improve recovery, and discover treatments or a cure for patients with brain cancer. Dr. Landau’s grant is one of two such Sontag Foundation grants awarded to Cornell, with Dr. Marcos Simoes-Costa, assistant professor in the Department of Molecular Biology and Genetics in the College of Agriculture and Life Sciences at Cornell University, receiving another to investigate the specific genetic mechanisms that are abnormally activated during the formation of the central nervous system that then lead to embryonal tumors.

“I’m particularly excited to work with the Sontag Foundation because they cultivate a community of leading scientists who share the same vision and goal of providing better therapeutic options for glioma patients,” said Dr. Landau, who is also a core member of the New York Genome Center, and an oncologist at NewYork-Presbyterian/Weill Cornell Medical Center.

Dr. Landau’s award will fund his laboratory’s efforts to unravel the different types of cells that make up gliomas, which are one of the most common types of brain tumor, and one of the deadliest of all cancers, with a five-year survival rate of only about 5 to 10 percent.

Dr. Landau and other investigators have shown in recent years that gliomas are not of one stable cell type but are in fact ever-shifting mixes of cancerous cells expressing different sets of genes and essentially having different cell identities. Some of these cancerous cells have stem-cell properties that make them particularly difficult to kill with chemotherapy-type treatments; others have more mature cell-type identities but often retain the capacity to revert back to “stemness.”

“Cancer cells in gliomas work as a community, which poses a challenge for therapeutic approaches because it means that drugs or therapies essentially need to counter not just one disease in each patient but rather multiple varieties of this disease,” Dr. Landau said.

He and his team have helped develop and pioneer the use of “single cell multi-omics” technology, which is particularly suited for the study of such heterogeneous cancers. The technology enables scientists to record, for individual cells, the DNA sequence, the gene activity pattern, and the pattern of gene-regulating “epigenetic” markers on DNA—and to do all this rapidly enough to characterize hundreds or thousands of cells sampled from a tumor.

By characterizing tumor cells in this fine-grained way, researchers also can develop a picture of how such tumors evolve over the course of glioma progression or in response to different therapies. That in turn should enable treatments—potentially multi-drug “cocktails”—that target these tumors more effectively.

“We expect that this work will give us a new perspective in understanding and treating brain cancers,” Dr. Landau said.